The two chemical engineering doctoral students in the Ira A. Fulton Schools of Engineering at Arizona State University have reason to be optimistic about achieving those goals. Progress they’ve made with ambitious research projects throughout their undergraduate and graduate studies has earned them opportunities to work with engineers and scientists at major federal agencies.

Wilson has been awarded a U.S. Department of Energy Computational Science Graduate Fellowship to aid his efforts to advance renewable energy generation, storage and deployment.

In addition to his research at ASU, the fellowship will enable Wilson to extend his range of expertise by working for three months at a national DOE lab sometime in the next three years.

Nile has been accepted into the NASA Space Technology Graduate Research Opportunities program, which sponsors doctoral students’ participation in development of new technology to advance the nation’s space exploration missions.

He will collaborate with a NASA specialist in his field and become part of a larger group of technical experts and researchers involved in a space technology research area that aligns with his engineering interests.

Nile will also work at various NASA labs 10 weeks per year for at least three years.

Progress in that direction could be not only a big step for energy system sustainability but also offer a blueprint for backup systems for conventional power grids, he said, adding that such systems could help prevent the kind of widespread outage that Texas recently experienced. 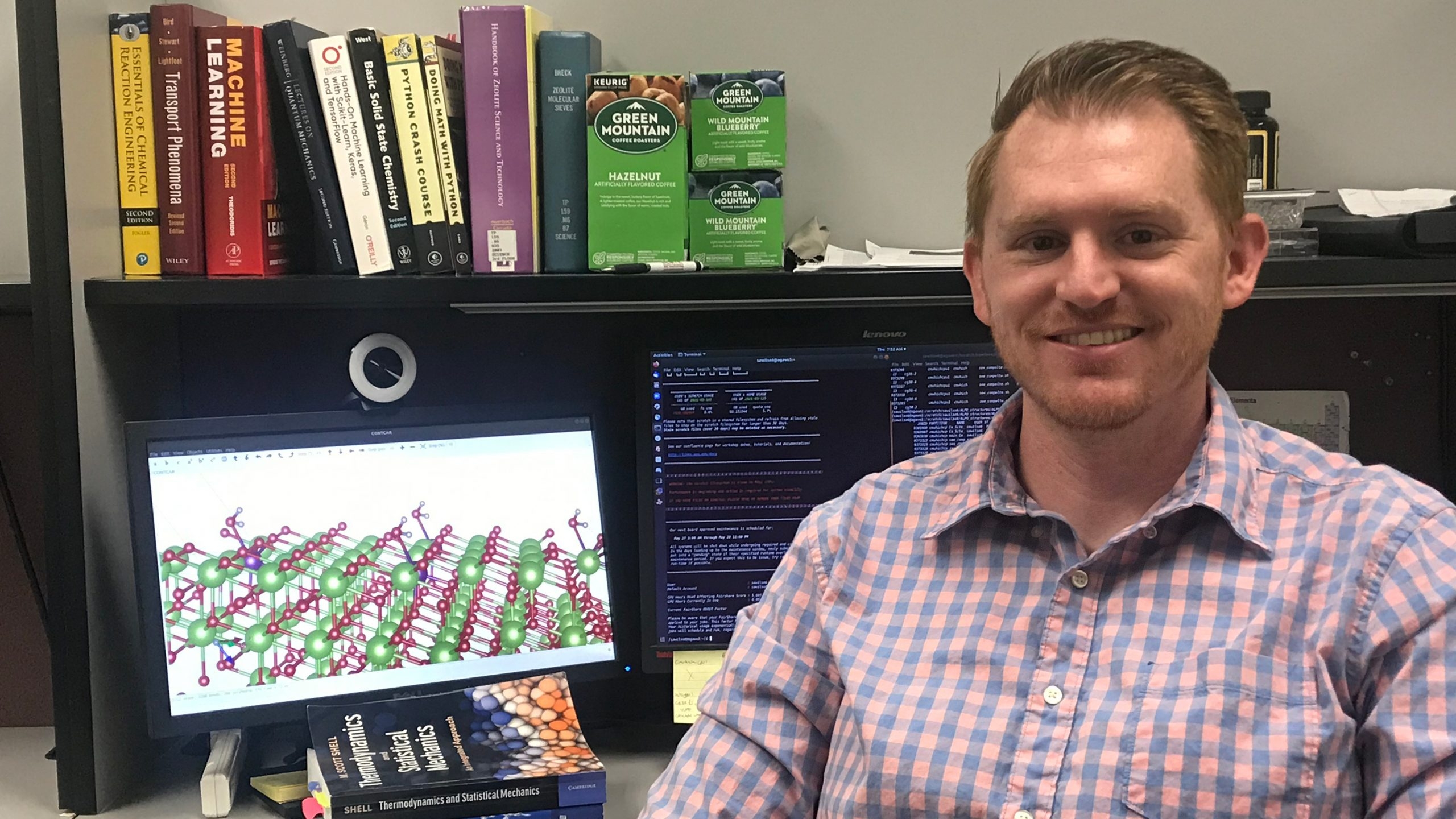 Steven Wilson, a chemical engineering doctoral student in the Ira A. Fulton Schools of Engineering at Arizona State University, will work with U.S. Department of Energy researchers on his projects to develop advancements in the uses of renewable energy generation, storage and deployment. Photo courtesy of Steven Wilson

Wilson’s path into engineering started during his 10 years in the U.S. Navy. As a chief petty officer in charge of a Reactor Laboratories Division, he led a team that oversaw the chemistry and radiological controls onboard Navy nuclear vessels. As a qualified engineering officer of the watch, he supervised startups, shutdowns and maintenance of a $1 billion nuclear power plant.

When he arrived at ASU to begin undergraduate studies, Wilson already had research and leadership skills, said Christopher Muhich, an assistant professor of chemical engineering in the School for Engineering of Matter, Transport and Energy, one of the six Fulton Schools. Wilson soon joined Muhich’s lab and became a valuable contributor.

Muhich, now Wilson’s doctoral studies adviser, notes that he “has achieved some amazing things for someone just finishing his first year of PhD studies,” including publishing two research papers and being lead author on a third paper that will report on “some really cutting-edge stuff.”

Muhich points specifically to Wilson’s creative combination of computational chemistry and machine learning to discover methods for using certain materials for renewable energy storage. Those methods could be essential to making it feasible to transition from fossil fuels to green-based systems, he said.

But such a fundamental shift will mean “the reliability of power grids is going to become more dependent on increasing capacities to store solar energy, wind energy and tidal energy,” Muhich said, and Wilson’s work is looking as if it can help meet that challenge.

“I want to do something that doesn’t just make some improvements to what we have been doing,” Wilson said. “I want to push the chemistry and physics and computing further, so that we can have smart renewable energy systems that will do things better than what we’ve been doing.”

The same can be said of Nile’s research aspirations. He wants to provide new technology to boost the effectiveness of water recycling and purification aboard spacecraft.

That work will involve developing membranes capable of thoroughly separating impurities from water at a molecular level. He will focus on what he describes as “enhancing the selective transport” of water by developing new ultrathin membranes that would enable more clean water to be recovered from wastewater and even from humidity in the air inside space vehicles. 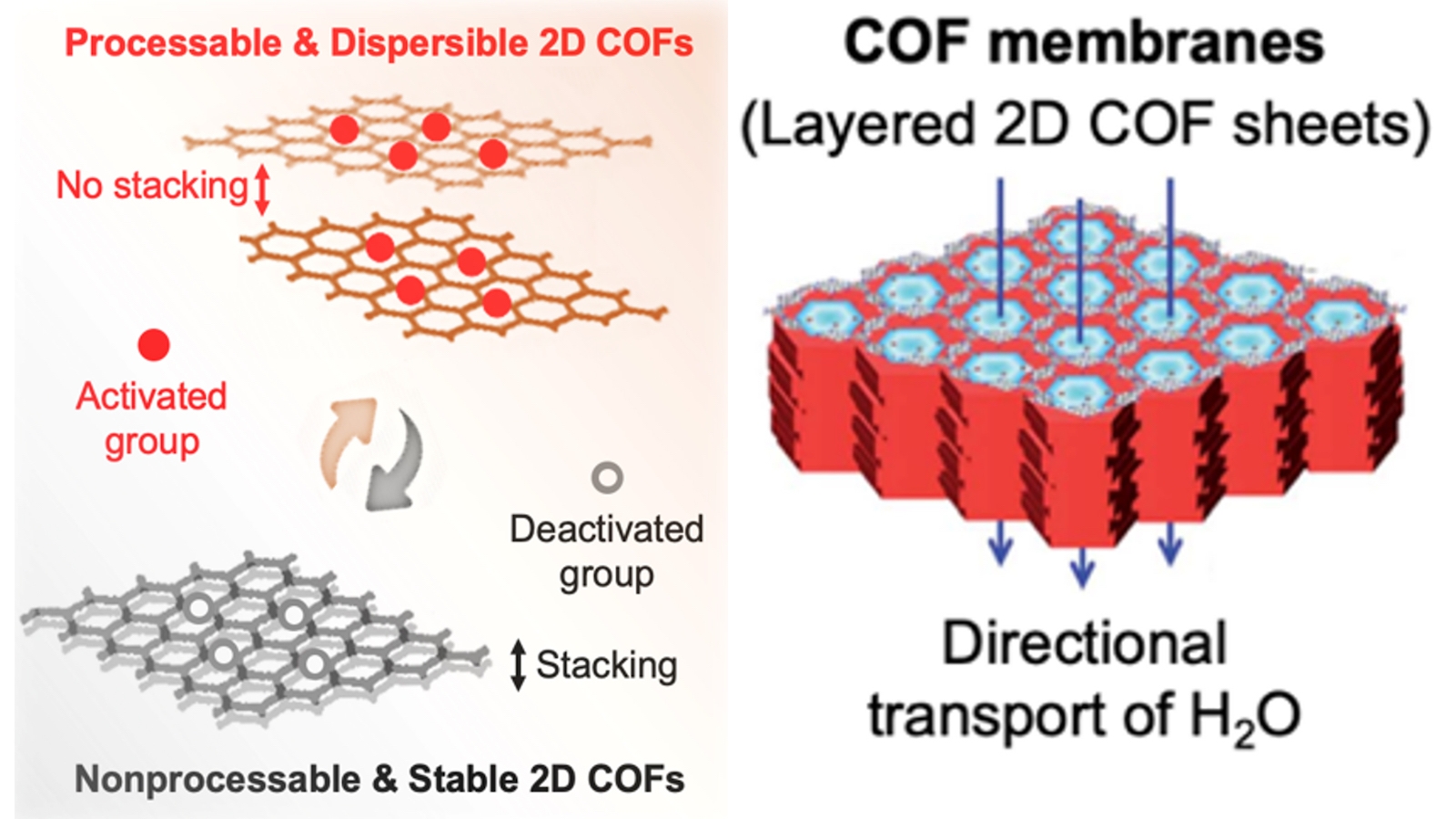 Schematics depict technology being developed by Gabriel Nile to provide recycled water to spacecraft crews while on space exploration missions. The system uses small molecular sheets to produce membranes that filter out impurities in water. Illustrations by Kailong Jin/ASU

The success of the process relies on the controlled stacking of intricately patterned molecular sheets to produce membranes that allow only water to pass through them.

Even minor improvements in the amount of water that can be recycled in space are expected to dramatically improve NASA’s ability to sustain more extensive exploration activities, Nile said.

By reducing the demand for expensive resupplies of water to spacecraft crews, missions to Mars or even farther would become more viable ventures, he said.

Nile is excited about the possibility of someday seeing technology he helped develop play an important role in space travel.

“I really like working on chemical separation processes,” he said. “So, this opportunity to collaborate with NASA experts has inspired me to go deeper into this work.”

“With our combined expertise in porous materials, inorganic materials and synthetic materials, I believe we can actually make some real progress in this area,” Jin said.

Beyond benefits of collaboration and mentorship that Wilson and Nile will get in their work with national labs as doctoral students, there are also potential long-term career advantages.

Muhich and Jin say leaders of national agencies scout students participating in these research programs, searching for those who show talents that match what the agencies’ labs are looking for in new employees.

“This experience will give them a big leg up in landing good opportunities at research laboratories or as university faculty members when they finish their schooling,” Muhich said.

Women are underrepresented in science, technology, engineering, mathematics or medicine (STEMM) fields, especially in leadership roles. According to a recent report from the National Center for Science and Engineering Statistics, there are more than twice as many men with college degrees working in science and engineering fields than women. And the women who do find themselves working in these ind...

Women are underrepresented in science, technology, engineering, mathematics or medicine (STEMM) fields, especially in leadership roles. According to a recent report from the National Center for Science and Engineering Statistics, there are more than twice as many men with college degrees working in science and engineering fields than women. And the women who do find themselves working in these industries may face sexism in the workplace.

It’s something that Noa Bruhis experienced firsthand while working as an engineer. “I was feeling pretty alone as a female engineer and dealing with blatant sexism,” Bruhis said. “I designed an environmental sensor, entered it into an international challenge and made it as a finalist. But when I had a problem with my sensor and needed more help, my company disbanded what was left of my team and cut my budget. Some of the feedback I got from one of the senior leadership was that if my project wasn’t happening and I needed something to do, the lab could use some cleaning, and I was welcome to grab a broom.”

It was then she decided to leave her job and come to Arizona State University to earn a PhD in Human and Social Dimensions of Science and Technology at the School for the Future of Innovation in Society in the College of Global Futures.

“I picked a program that would put me out of my comfort zone and throw me into a different style of thinking," Bruhis said. "I was in courses and conversations that I had never been in before and never thought about before, and some of them attacked my old ways of thinking, which is healthy. I was drawn to the program and the people in it because it was so different from what I knew, and I would have the opportunity to grow.”

In the program, Bruhis learned about Homeward Bound, a global leadership initiative for women in STEMM. The program brings together a diverse cohort of women from around the world who are working to build a healthier and more sustainable future. It provides personal development and leadership tools, coaching, and networking opportunities through online content and collaborative learning. The 12-month program culminates with an expedition to Antarctica. As part of the sixth cohort of Homeward Bound, Bruhis will share her experiences and expertise while finding support and guidance as a woman in STEMM.

“One of the slogans of the program is ‘Mother Nature needs her daughters.’ Of course Mother Nature needs all her children, but many of her sons are already in place," Bruhis said. "People who aren’t (cisgender) male will have extra hurdles in STEMM. With this program, we’re able to validate those experiences and acknowledge that the challenges we face are different than those of our male counterparts. So let’s figure out what to do about it and make some moves.”

The program emphasizes a model of leadership, hard work and perseverance, something Bruhis has demonstrated throughout her life. She is a first-generation American and a whitewater rafting guide, and she rebuilt a car in high school. During her time at ASU, she has studied natural resource extraction and co-produced a documentary about helium extraction in northeastern Arizona. Her current research focuses on participatory filmmaking and finding ways for people with different ideologies to have more meaningful and equitable conversations with each other. She is also a Knowledge Mobilization Award winner for her work to engage with communities. With her unique and diverse science background, Bruhis hopes to bring a different perspective to the Homeward Bound program.

“I’ve found my ability to ask questions that others may not have been trained to ask is unique. As engineers, we’re often trained to ask, 'How can we solve this problem?' not 'Should we?' or 'Who gets a voice in that decision?' I’m excited to help bridge that gap.”