The current prognosis for our world’s coral reefs is bleak. With ever-warming, more polluted and acidic oceans, models predict that 70% to 90% of coral reefs will be lost by 2050. To date, there has not been a global system in place to monitor coral reefs under the stresses that may lead to their deaths. But scientists now have a tool to monitor the global health of coral reefs, bringing new hope to conservation efforts. 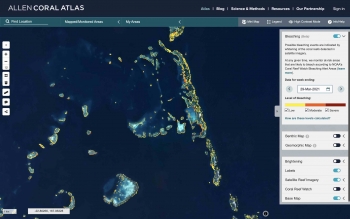 “Our ability to monitor changes in coral reef conditions has always been a clear but challenging requirement to drive decisions on where to apply our best restorative and protective strategies,” said Professor Greg Asner, managing director of the Allen Coral Atlas, and director of Arizona State University’s Center for Global Discovery and Conservation Science. “The new Atlas Monitoring System is a major step in our effort to bring eyes to the reef at a global scale and yet with extraordinary detail needed for progressive reef interventions.”

The satellite eyes on the world’s reefs detect variations in reef brightness by using high-resolution satellite imagery powered by an advanced algorithm indicating whether reefs are under stress or resilient to marine heatwaves. Researchers, conservationists, policymakers and others who use the monitoring system platform can observe where corals are bleaching throughout the world, ranging from no bleaching to severe.

“This monitoring capability will help us to see, for the first time, where and to what extent coral bleaching is likely to be occurring as well as where it isn’t bleaching so we can identify resilient reefs,” said Paulina Gerstner, program director for the Allen Coral Atlas. “The system is the outcome of years of effort involving our ecologists, remote sensing scientists, software engineers and many others.”

ASU’s Center for Global Discovery and Conservation Science successfully piloted a beta version of the Atlas Monitoring System in Hawaii during the 2019 Pacific Ocean heatwave. The beta version revealed bleaching “hot spots'' spread across the Hawaiian Islands that went undetected by more traditional field-based methods. This provided greater context for understanding the progression of coral bleaching and helped to target mitigation efforts to reduce secondary stressors on threatened corals. Studies have shown that if secondary stressors are reduced before, during and after bleaching events, corals are more likely to survive.

The beta version also allowed Asner and his team to identify hardier heat-resistant coral species for use in future coral reef restoration efforts. As ocean warming events are more likely to become much more frequent due to climate change, the Atlas’ ability to provide full coverage of coral disturbance in real-time will play a key role in helping conservation scientists and policymakers to better identify declining species and scale up restoration efforts where they are needed.

“It’s important for people to understand that this is just the first global version of our monitoring system. We intend to improve and expand it to include a broader range of impacts on reefs such as land-sea pollutants and sediments,” said Asner. “This first, truly global reef monitoring system is simply a drop in the bucket for what is to come.”

Students from ASU's Medallion Scholarship Program organized a service project to not only help the community, but also reduce waste.Medallion Scholar and W. P. Carey School of Business undergraduate Ahlias Jones shared how the students developed the idea to organize a clothing drive. “As many of us lived in the dorms, we knew that students would be cleaning out their rooms in preparation to move...

Students from ASU's Medallion Scholarship Program organized a service project to not only help the community, but also reduce waste. 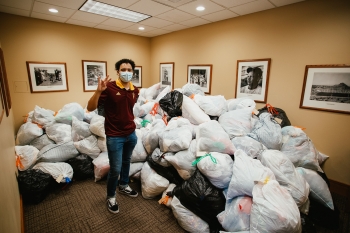 “As many of us lived in the dorms, we knew that students would be cleaning out their rooms in preparation to move out,” he said. “We were concerned with the amount of items that were going to be thrown away, so we thought a clothing drive would be a good service project and a better option for students when cleaning out their closets.”

Jones and other first-year students decided to expand the project and involve the entire Medallion Scholarship Program student group, while also turning the project into a friendly competition. Within the program, there are 14 mentorship pods. These pods consist of about 10 students who share similar majors or interests and are in different years at ASU. The students who planned the drive thought that keeping track of the pod who donated the most clothing would add a little extra motivation, and it definitely did. The winning pod donated 318.9 pounds of clothes and shoes, and the pod that came in second place donated 291.9 pounds.

The first-year Medallion Scholars who planned the drive were not expecting to receive as many donations as they did. As a program, they collected 1,912.84 pounds of clothing and shoes to donate to UMOM New Day Centers, a local organization that helps restore hope and rebuilds lives by providing shelter, housing and services for people experiencing homelessness. In groups, the Medallion students create a service activity that will impact the location community during their freshman year. Many of the groups tend to focus on and assist the homeless population, so this donation was an opportunity to take components of those projects and put them into action.

Jones and his fellow student organizers were pleasantly surprised to see donations come in from students of all academic years, not just first-year students who were preparing to move out of the dorms. “It was really cool to see everyone in the Medallion Scholarship Program get so involved in the drive.”

The Medallion Scholarship Program is the ASU Alumni Association’s signature scholarship initiative. More than a financial award, it is a comprehensive program that recognizes and develops a proud tradition of leadership, scholarship and service.

More information about the Medallion Scholarship Program and how to donate to or apply for it.