Deep water on Neptune and Uranus may be magnesium-rich

While scientists have amassed considerable knowledge of the rocky planets in our solar system, like Earth and Mars, much less is known about the icy water-rich planets, Neptune and Uranus.

In a new study recently published in Nature Astronomy, a team of scientists re-created the temperature and pressure of the interiors of Neptune and Uranus in the lab, and in so doing have gained a greater understanding of the chemistry of these planets’ deep water layers. Their findings also provide clues to the composition of oceans on water-rich exoplanets outside our solar system. 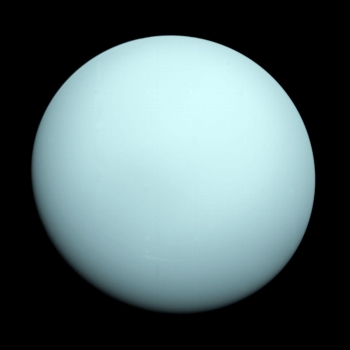 Uranus, taken by the NASA spacecraft Voyager 2. This ice giant, which is the seventh planet from the sun in our solar system, is nearly four times larger than Earth, and most of its mass is a dense fluid above a rocky core. Image by NASA/JPL Download Full Image

Neptune and Uranus are conventionally thought to have distinct separate layers, consisting of an atmosphere, ice or fluid, a rocky mantle and a metallic core. For this study, the research team was particularly interested in possible reaction between water and rock in the deep interiors.

“Through this study, we were seeking to extend our knowledge of the deep interior of ice giants and determine what water-rock interactions at extreme conditions might exist,” said lead author Taehyun Kim, of Yonsei University in South Korea.

“Ice giants and some exoplanets have very deep water layers, unlike terrestrial planets. We proposed the possibility of an atomic-scale mixing of two of the planet-building materials (water and rock) in the interiors of ice giants.”

To mimic the conditions of the deep water layers on Neptune and Uranus in the lab, the team first immersed typical rock-forming minerals, olivine and ferropericlase, in water and compressed the sample in a diamond-anvil to very high pressures. Then, to monitor the reaction between the minerals and water, they took X-ray measurements while a laser heated the sample to a high temperature.

The resulting chemical reaction led to high concentrations of magnesium in the water. Based on these findings, the team concluded that oceans on water-rich planets may not have the same chemical properties as the Earth’s ocean and high pressure would make those oceans rich in magnesium.

“We found that magnesium becomes much more soluble in water at high pressures. In fact, magnesium may become as soluble in the water layers of Uranus and Neptune as salt is in Earth’s ocean,” said study co-author Sang-Heon Dan Shim of Arizona State University’s School of Earth and Space Exploration. 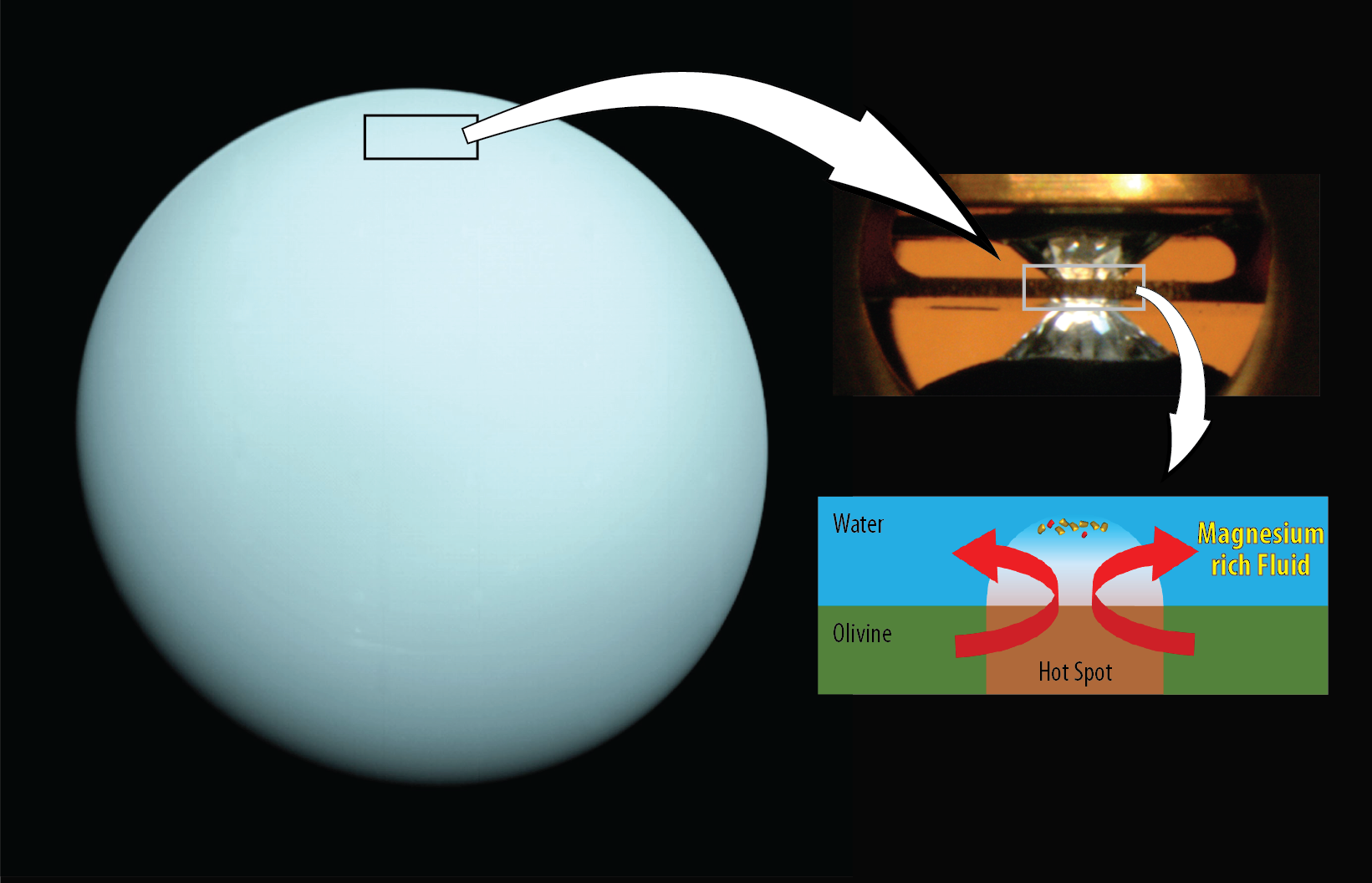 A diamond-anvil (top right) and laser were used in the lab on a sample of olivine to reach the pressure-temperature conditions expected at the top of the water layer beneath the hydrogen atmosphere of Uranus (left). In this experiment, the magnesium in olivine dissolved in the water. Credit: Shim/ASU

These characteristics may also help solve the mystery of why Uranus’ atmosphere is much colder than Neptune’s, even though they are both water-rich planets. If much more magnesium exists in the Uranus’ water layer below the atmosphere, it could block heat from escaping from the interior to the atmosphere.

“This magnesium-rich water may act like a thermal blanket for the interior of the planet,” said Shim.

Beyond our solar system, these high-pressure and high-temperature experiments may also help scientists gain a greater understanding of sub-Neptune exoplanets, which are planets outside of our solar system with a smaller radius or a smaller mass than Neptune.

Sub-Neptune planets are the most common type of exoplanets that we know of so far, and scientists studying these planets hypothesize that many of them may have a thick water-rich layer with a rocky interior. This new study suggests that the deep oceans of these exoplanets would be much different from Earth’s ocean and may be magnesium-rich. “If an early dynamic process enabled a rock–water reaction in these exoplanets, the topmost water layer may be rich in magnesium, possibly affecting the thermal history of the planet,” said Shim.

For next steps, the team hopes to continue their high-pressure/high-temperature experiments under diverse conditions to learn more about the composition of planets.

“This experiment provided us with a plan for further exploration of the unknown phenomena in ice giants,” said Kim.

Additional authors of this study include Stella Chariton and Vitali Prakapenka of the University of Chicago; Anna Pakhomova and Hanns-Peter Liermann of the Deutsches Elektronen Synchrotron, Germany; Zhenxian Liu of the University of Illinois, Chicago; Sergio Speziale of the German Research Center for Geosciences, Germany; and Yongjae Lee of Yonsei University, South Korea.