Why do some human settlements endure the test of time, while others do not?

The modern, industrialized society is not how humans have always lived.

In fact, the last 200 years make up only a tiny portion of human history.

An interdisciplinary team led by Arizona State University researchers is calling for a focused research effort to understand why some human settlements endure the test of time (for thousands of years, in some cases), while others do not.

The researchers published their call this week in the Proceedings of the National Academy of Sciences describing a lack of analysis in this area, called settlement persistence. Settlement refers to any place where humans live and interact — including cities, towns, villages and even hunter-gatherer camps.

The authors pose three possible factors that determine how long a city prospers, including population size, institutions that create cultural norms and physical infrastructure, and the surrounding natural environment.

While much of this raw data exists, the authors call for an in-depth analysis of settlement areas around the world over thousands of years. This is a massive undertaking, as data first needs to be standardized before it can be used for further analysis, like creating models to simulate trajectories of current human settlements.

At first, one may not see the urgency in learning about the dynamics of a long-gone city. The researchers argue that organized, quantifiable data on human settlements throughout deep history and recent history can help us better understand urban sustainability today.

Figure 1 from the paper, showing the length of occupation of some premodern settlements. Ebla and Athens started in a similar physical location at a similar time. So why did Athens endure as Ebla fell? Similarly with Beijing and Xi’an. What made Beijing different from Xi’an? Reprinted with permission from Smith, et al., PNAS doi.org/10.1073/pnas.2018155118 (2021).

What is urban sustainability?

Sustainability generally refers to the ability for something to carry on and continue. In what ways do our modern settlement areas operate sustainably? Are some more sustainable than others?

Cities are typically thought of as massive and strong. Able to support thousands, sometimes millions of people, they are well-developed and established.

However, the ever-changing human landscape is constantly presenting human settlements with new challenges. Perhaps the year 2020 has made many think twice about the stability of the places where we live, work and interact. Will the cities and towns we know today still exist in 100 years? In 1,000 years?

“Fundamentally, sustainability is about humans coexisting in an environment for generations,” said co-author Abigail York, associate professor in the School of Human Evolution and Social Change, who studies environmental social science and urbanization. “Sustainability means that the underlying ecosystem integrity is maintained and people thrive with reduced injustice and inequity. Modern, Western societies (like ours) fail in both dimensions.”

What do we know so far?

Not only does much of the raw data on past settlement demography, institutions and geography already exist, but there is also anecdotal information that can help set the stage for continued analysis.

Lead co-author and archaeologist Michael E. Smith, a professor in the school, noted some researchers draw similarities between the ancient Maya civilization and many modern societies, though this is not particularly useful from a scientific perspective.

For example, right before the Maya collapse, there was a distinct separation of the Maya elite and the commoners. The elite members of society were not behaving in a way that was sustainable for everybody. Some see a similar situation panning out in modern societies.

“While this does prompt us to think about things, it doesn’t really provide any kind of rigorous, scientific background for comparison,” Smith said. “So, we need to have the kind of quantifiable data that an urban sustainability scientist will be able to understand and use.” 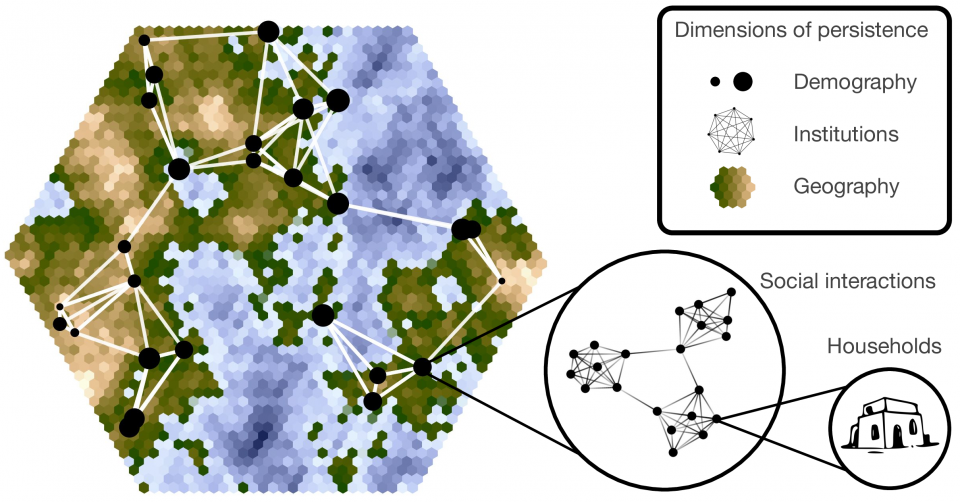 The authors note Rome as a well-studied example of settlement persistence and resilience theory.

Resilience theory prompts questions like why do settlement areas “bounce back” after a major disruption like extreme weather or war, while others do not?

A complete picture is needed

The authors, experts in their respective fields of urban sustainability, economics, archaeology, ancient cities and geography, note the importance of this research. They say that many scientists in the field recognize the value of understanding the past, but there aren’t many concerted efforts to organize and analyze the thousands of years of archived data.

The authors say human settlements of today will need to adapt. They’ll need to adjust for climate change. What will coastal cities look like in 50 years? Understanding how humans have responded to climate change events in the past may be a good place to start.

“Ignoring the diversity of human experience and history is a flawed strategy,” York said. “Particularly as it is increasingly clear that the status quo, the dominant modern, Western approach, cannot solve today’s urban sustainability challenges.”

“The Persistence of Ancient Settlements and Urban Sustainability” published in PNAS volume 118 in May 2021. The paper was co-authored by Arizona State University researchers from the School of Human Evolution and Social Change and the School of Sustainability, including Smith, José Lobo, Matthew Peeples, York, Benjamin Stanely, Katherine Crawford and Angela Huster, and University of Arizona researcher Nicolas Gauthier.

May is Nurses Month, which honors the nation’s registered nurses through celebrations, education and recognition. And as the country focuses its attention on supporting this critical workforce, there’s also a lot to be learned about the nursing worldview and how, if adopted by non-nurses, we might all get along a bit better.Heidi Sanborn, a clinical assistant professor and the director of Edso...

May is Nurses Month, which honors the nation’s registered nurses through celebrations, education and recognition. And as the country focuses its attention on supporting this critical workforce, there’s also a lot to be learned about the nursing worldview and how, if adopted by non-nurses, we might all get along a bit better.

Heidi Sanborn, a clinical assistant professor and the director of Edson College’s RN-BSN and Concurrent Enrollment programs, recently presented on this topic during a Midday Mindfulness session. 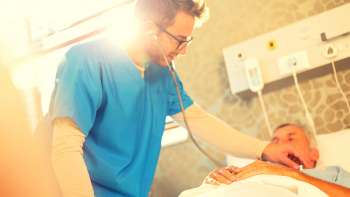 Applying the nursing worldview to everyday encounters and things that would normally set someone off or stir up anxiety can help break the negative cycle and promote a sense of well-being. Photo from Canva. Download Full Image

During the pandemic, and even before, social media platforms have polarized how many people see and relate to the world around them. As a result, there’s been a growing divide within communities, breeding isolation and distrust.

Sanborn says borrowing from the Nursing Code of Ethics, which is the foundation of the nursing worldview, can help people disrupt this negative cycle.

“Nurses have been ranked as the most trusted profession for nearly two decades and there’s a reason for that. The nursing dogma that guides our treatment of others and how we practice presence and mindfulness during a crisis could be really beneficial at this moment for non-nurses to explore,” she said.

Learning to adopt this unique way of relating to others can promote a sense of well-being and peace according to Sanborn, who has been applying this to her own life over the last year.

So what is the nursing worldview and how can you incorporate it into your own life? We asked Sanborn, who’s been a nurse for more than two decades, to walk us through it. 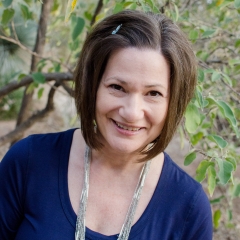 Question: What is the nursing worldview?

Answer: This really stems from the Nursing Code of Ethics, which is a set of provisions, of expected behavior, that all nurses are obligated to uphold as part of our professional identity. This includes things like practicing with compassion and respect for the inherent dignity, worth and unique attributes of every person. We have a responsibility to advocate for the rights of every patient.

There could be a lack of harmony between what I think is right and wrong or how I view the world and how my patients view the world. That is OK. As a nurse, I have to accept that dissonance and set myself aside. I have to really focus on that patient and what they need in order to navigate the health care system in a way that’s most meaningful for them.

It really boils down to this: As a nurse, none of my patients need to understand me. It’s irrelevant in the nurse-to-patient relationship. What is relevant is that I understand the patient. That’s my job and my role as a nurse.

Q: Can you give an example of using this philosophy outside a hospital?

A: Let’s use social media as an example since that’s where we’ve seen a lot of division, especially in the last year. If I view everybody that I encounter on Instagram, Facebook or Twitter the way I’m expected to view all of the patients that I encounter, it changes the frame that I have for that person. I step away from judging my neighbor because they voted for somebody or because they don’t believe in something I do, or because they don’t want to get a vaccine based on disinformation — you name it. If I set aside that idea that I’m there to judge, that I’m there to be understood, and I focus more on understanding, it really changes that frame for me.

Q: What are some of the benefits of using this philosophy?

A: By applying this framework to everyday encounters and things that would normally set someone off or stir up anxiety, you can break the negative cycle and find a sense of well-being.

That is really where the nursing worldview can help. By refocusing on the inherent dignity and worth of others, and their right to live life as they need to live it, we can set aside the need to carry any angst ourselves. It doesn’t solve the deep injustices and disparities that are causing strife in our world, but it does release us from absorbing the anger from negative encounters we have.

From my own experience, applying this in my personal life has been a really important piece of my own well-being and my own mental stability over the last year. It has helped me find some peace.

Q: Where can people learn more about the nursing worldview and other tools?

A: My Midday Mindfulness session is a great place to start. I cover what we talked about here, but in a lot more depth. Also, I share some of the tools I use to combat compassion fatigue, which is something I can tell you a lot of nurses are dealing with right now.

My favorite and most portable tool is pranayama, also known as box breathing. You can follow along with an example here. Another tool that I use often is listening to Himalayan singing bowls. I find the vibrations of the bowls replace the feeling of anxiety that builds up in my chest. I meditate to the bowls, along with my favorite guide, Ben Irons. But I don’t need to be meditating for them to help me. I have been known to play them when I’m driving or walking. You should try it!