John Byrd, rising senior at Arizona State University, originally dropped out of high school due to a lack of motivation and poor grades.

“Basically, when I was in high school I was sick of education," Byrd said. “I was like, ‘Why do I need to go to college? I don't want to do that. I want to stay home and watch movies, read books, play video games and do anything but school.’” 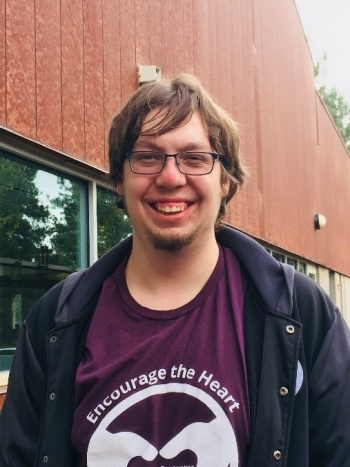 After working in retail positions for a few years, Byrd learned his cousin was graduating with his bachelor’s degree, even though they were the same age.

“As I went into the community college, I was like, ‘Hey, I know classes start next week but can I get in on that?' And then pretty much never looked back,” Byrd said.

Byrd then transferred to ASU for the school’s biomedical engineering program, but realized how much he loves physics.

“I love exploring the how and the why behind things — but the engineering side of it: ‘How do we make this product? How do we get money out of this?’ — just didn't fit with me at all,” Byrd said.

Byrd is currently working on his thesis with David Meltzer on the Physics Education Research Project, which looks at how physics is currently taught and how it can be changed.

“There's this conception that physics and math are terribly hard impossible courses that some people are just not cut out for, that ‘Oh, I'm just not a math person,’ and what we found is (that is) absolutely not true,” Byrd said. “So the idea is by getting the diagnosis evolved over the years to different courses of introductory physics students, we can kind of see where those gaps are in their math knowledge.

"And then the eventual idea is once we can definitively say, 'OK, these are where the gaps are in the math knowledge,' what my thesis is doing when I'm starting up in fall is to go in and do some in-depth interviews with the students and figure out what their mental block is with all these promises or something they never learned about, and really get to the bottom of the why. Because we can say, "Oh, well students are problem-solving this particular problem.”

Byrd hopes to later take this knowledge toward his PhD and improve the status of education.

“Eventually I'd like to move up into more college management positions where we're talking about themes and things like that, and have a role in shaping the curriculum and the degree to be better students,” Byrd said.

Since 2016, Jake Agron has led the Arizona Senate Research Department, which provides nonpartisan, objective research and policy analysis to the elected members of the chamber.Now Agron is returning to his Sun Devil roots — he graduated from Arizona State University with a bachelor’s degree in political science before going off to earn a law degree from the City University of New York — to ...

Since 2016, Jake Agron has led the Arizona Senate Research Department, which provides nonpartisan, objective research and policy analysis to the elected members of the chamber.

Now Agron is returning to his Sun Devil roots — he graduated from Arizona State University with a bachelor’s degree in political science before going off to earn a law degree from the City University of New York — to oversee the Morrison Institute for Public Policy’s Arizona Governance and Policy Academy. The Arizona Governance and Policy Academy offers information sessions on complex yet critical public policy issues — such as the economy, tribal sovereignty, water, housing, tourism and child welfare — that Arizona’s elected leaders at all levels of government are likely to encounter as policymakers. One objective of the academy is to connect elected officials and their staff with subject matter expertise from across ASU, the University of Arizona and Northern Arizona University. The Arizona Governance and Policy Academy is supported with funding from APS.

Question: You’ve spent more than a decade working at the Arizona Capitol. Much of that time, you led the team that provides nonpartisan research to members of the Arizona Senate. How did that experience prepare you to lead the Arizona Governance and Policy Academy and connect ASU expertise to elected officials?

Answer: My experience working at the Arizona Senate has prepared me for this role in two major respects. First, I understand the needs of elected officials and their staff as they navigate the complex process and schedule of lawmaking. Additionally, I have spent my career providing nonpartisan analysis in a very political environment. I look forward to continuing to connect policymakers to nonpartisan research as part of the Arizona Governance and Policy Academy.

Q: You’ve had more of an insider’s chance than most Arizonans to see what works — and what doesn’t — with respect to our state and local government structures. What are some topics related to Arizona governance that you think are ripe for research?

A: We’re certainly in an opportunistic moment in which stakeholders from across the political spectrum are interested in criminal justice reform. I think there is certainly a desire for specific and targeted research on safe ways to reduce the prison population. The other topics that are ripe for research are those related to emerging technologies that are not widely understood. For example, blockchain technology will likely have a growing impact in many industries and policymakers will be confronted with the role of government regulation in those various sectors.

Q: What’s something you wish Arizonans knew about how the Arizona Capitol works?

A: The range of topics legislators are confronted with at the Capitol each year can feel insurmountable — especially for newly elected members. With that said, there is a genuine desire at the Capitol, whether by elected officials or their staff, to want to learn more about how proposed legislation will affect their constituents.