Pollen is widely known both as an incredibly important aspect of creating our ecosystems and as an annoyance to those who suffer from allergies.

It can easily transfer to your hands or clothing when you pick a flower. This transferability is among several reasons why pollen is being investigated for forensic tracking and may be a key element in helping to determine place of origin and movement in a variety of circumstances, including the investigation of criminal activity. 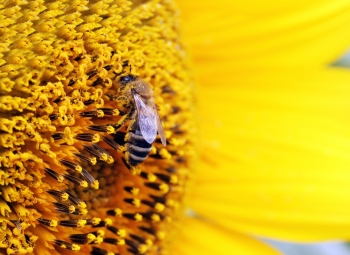 A bee collects pollen from a sunflower. Photo courtesy of depositphotos.com.

Forensic palynology, which is the act of using pollen to link persons and objects to specific locations, isn’t a new method of forensic investigation. It has been used in a variety of ways, including being used to link the movement of bodies in mass graves in Bosnia. But researchers are now working to leverage the power of geocomputation, geographic information science and spatial optimization modeling to improve upon existing approaches. Supported through a multimillion dollar MURI award from the Department of Defense, researchers have released with their article “Indentifying the spatial footprint of pollen distributions using the Geoforensic Interdiction (GOFIND) model” in the journal Computers, Environment and Urban Systems.

“Pollen grains are small and can nestle, undetected, into clothing, backpacks, shoes and almost any object, including the human body, like under fingernails or on human hair,” said Daoqin Tong, associate professor in ASU’s School of Geographical Sciences and Urban Planning and lead author on the paper. “Also, pollen is durable and ubiquitous in the environment and is highly resistant to chemical weathering and can exist without decay for years or even decades.”

These characteristics of pollen make forensic palynology a novel way to help track point of origin or movement of items that have been used in criminal and terrorist activities, such as computers, undetonated explosives and paper. In the past, this method has been rarely used in practice due to barriers such as a slow process to identify microscopic pollen samples and no current tools to map pollen to specific geolocations. It’s this location information that researchers are hoping to tackle with their GOFIND model.

GOFIND is a mathematical model that helps identify forensic samples’ geographic origin by using the geospatial signatures attached to plant species and where they can be found. The model is structured to account for the complexities of different forensic samples and their potential multi-geographic origins. For instance, the Saguaro cactus blooms from mid-April to early June and there is only one region on Earth where this happens. The GOFIND model research team is working to ultimately combine this spatial and temporal information of different pollen samples to better assist in using pollen for forensic investigations.

“This is an exciting advance for the field of forensic palynology,” said Micheline Strand, program manager for this MURI grant from the U.S. Army Combat Capabilities Development Command, known as DEVCOM, Army Research Laboratory. “Forensic palynology is an important tool for countering terrorism, smuggling and counterfeit goods.”

As they continue the work in this field, the researchers will continue to grow their catalog of pollen samples to include in their GOFIND model.

“This work is part of a much larger project that will use pollen samples collected from around the United States and the world to fine-tune the GOFIND model,” said Tony Grubesic, professor at the University of Texas at Austin and co-author of the article.

They plan to not only collect more pollen samples to include in the GOFIND model, but also will work to help mitigate some of the model’s current weaknesses.

“GOFIND does not account for the more complex factors associated with pollen movement, especially given human interactions with pollen,” Tong said. “We plan to construct a second model to account for these spatial interactions and the many human factors that can potentially mediate the movement of pollen in geographic space.”

About 30 students in the Herberger Institute for Design and the Arts celebrated two “firsts” at their graduation celebration the evening of May 4: They were the first graduates of the new School of Music, Dance and Theatre at Arizona State University, and they were the first graduates to celebrate in the newly renovated courtyard outside the Nelson Fine Arts Center.The graduates, along with th... 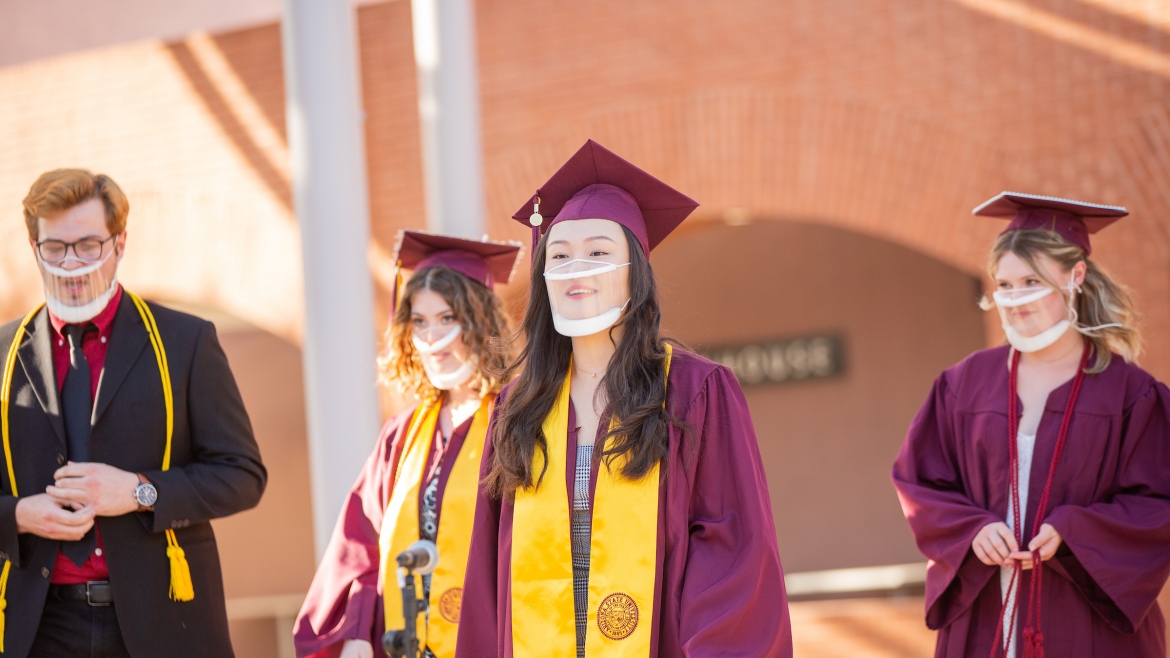 School of Music, Dance and Theatre grads told to make time to be creative

The graduates, along with their families and faculty members, gathered in a socially distanced setting at sunset. Because of the COVID-19 pandemic, ASU is holding many small, in-person celebrations instead of one large commencement for spring 2021.

“What a wild ride it’s been for the past 14 months,” said Heather Landes, director of the school, which combined the three performance disciplines into one school for the first time.

“I want to recognize that the past year has not been easy for anyone, but especially for those of us in the performing arts.”

Landes exhorted the students to find time every day in their lives to create their art.

“Even when you’re faced with creative blocks or failure, return to your creativity and your foundation and it will help you.

“Keep making your art to bring people together from all backgrounds, to promote collaboration and to challenge the norms of our society in a tangible way. And most of all, to create community across difference.” Greta Perlmutter, who earned a degree in musical theater, elbow bumps with Heather Landes, director of the School of Music, Dance and Theatre, at the graduation celebration on May 4 in the Nelson Fine Arts Center courtyard. 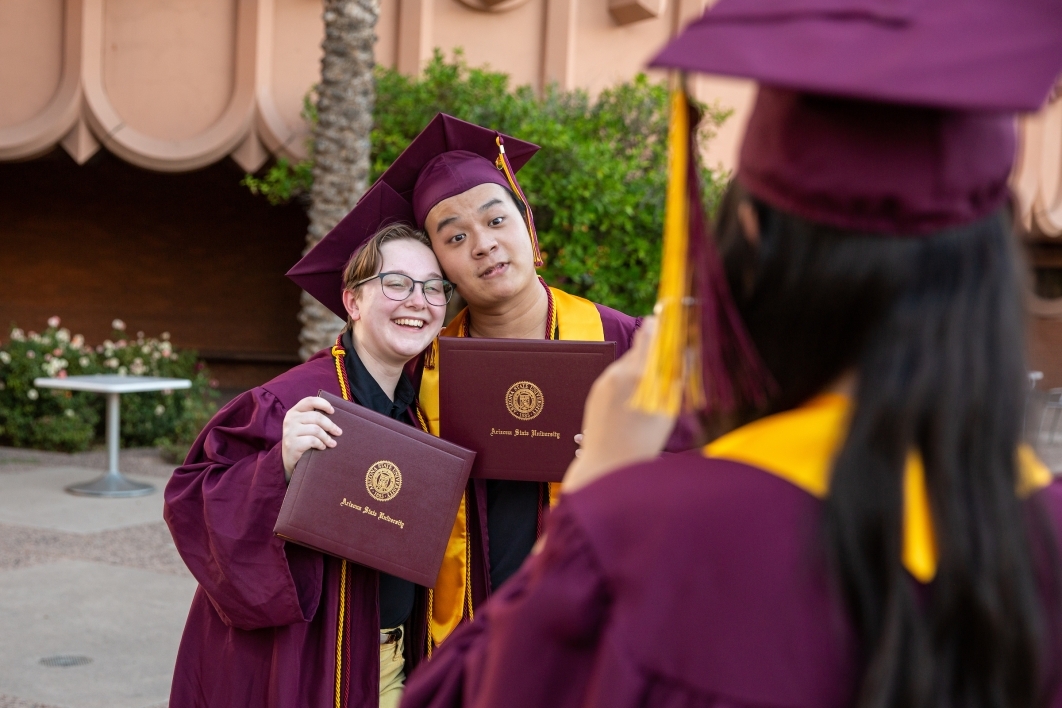 Taryn Lande (left) and Xingyu Wang, both of whom earned degrees in musical theater, pose for photographs after the graduation celebration of the School of Music, Dance and Theatre on the Tempe campus on May 4. 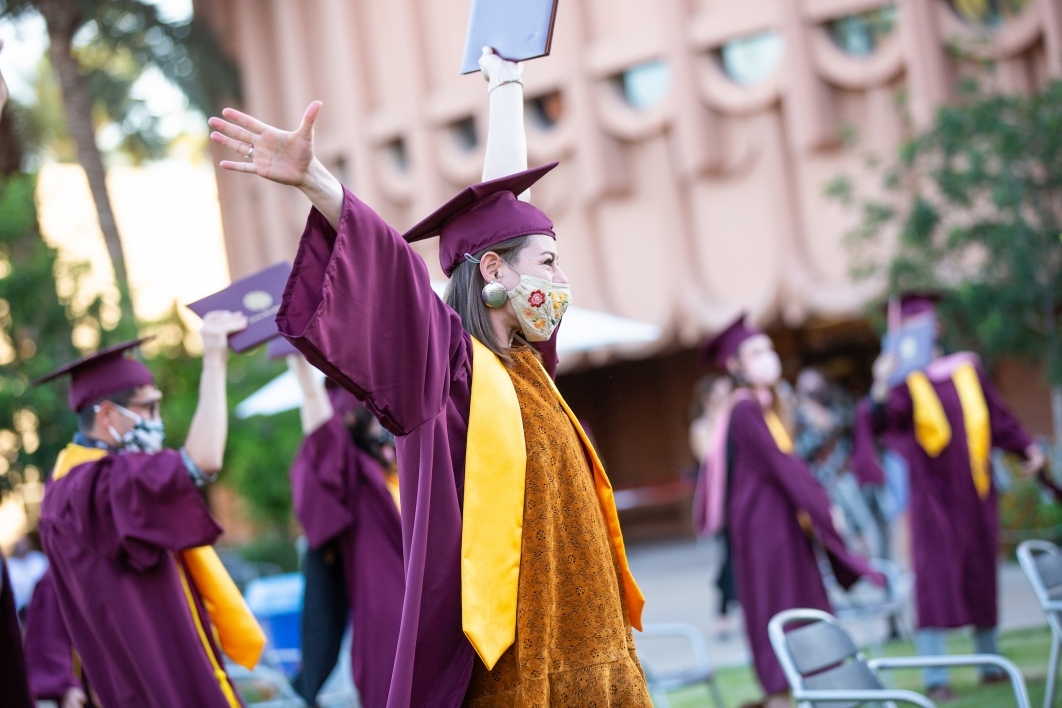 Rain Locker, who earned a degree in performance and movement, cheers at the graduation celebration of the School of Music, Dance and Theatre on May 4. 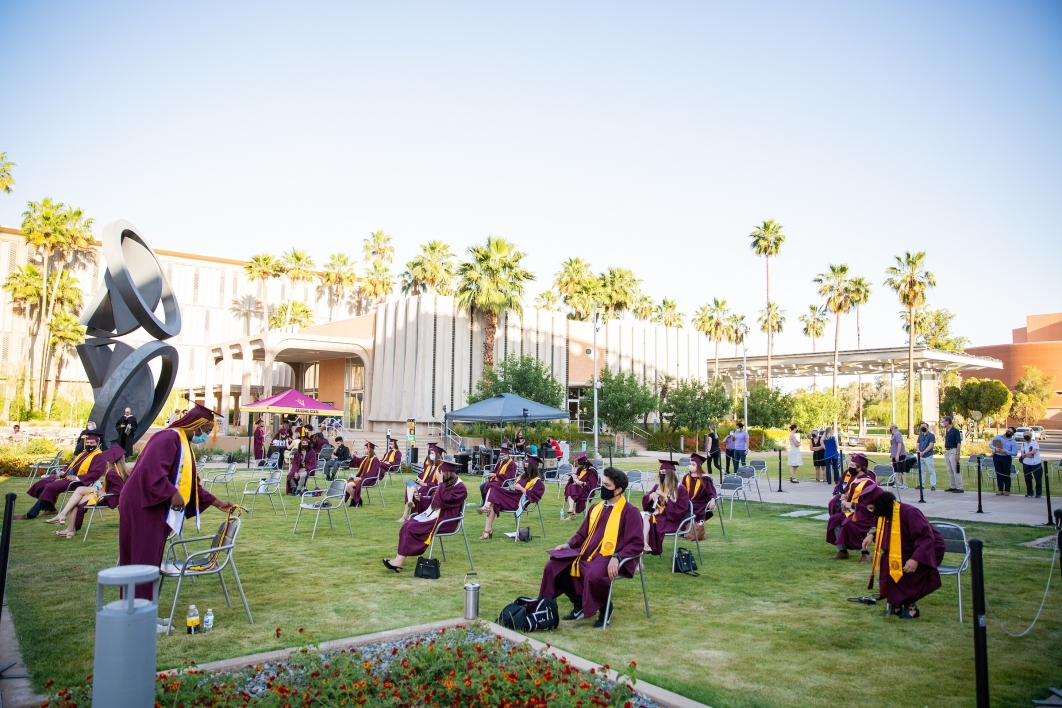 Undergraduate graduates sit socially distanced on the lawn as they watch the start of the Herberger Institute for Design and the Arts School of Music, Dance and Theatre celebration. 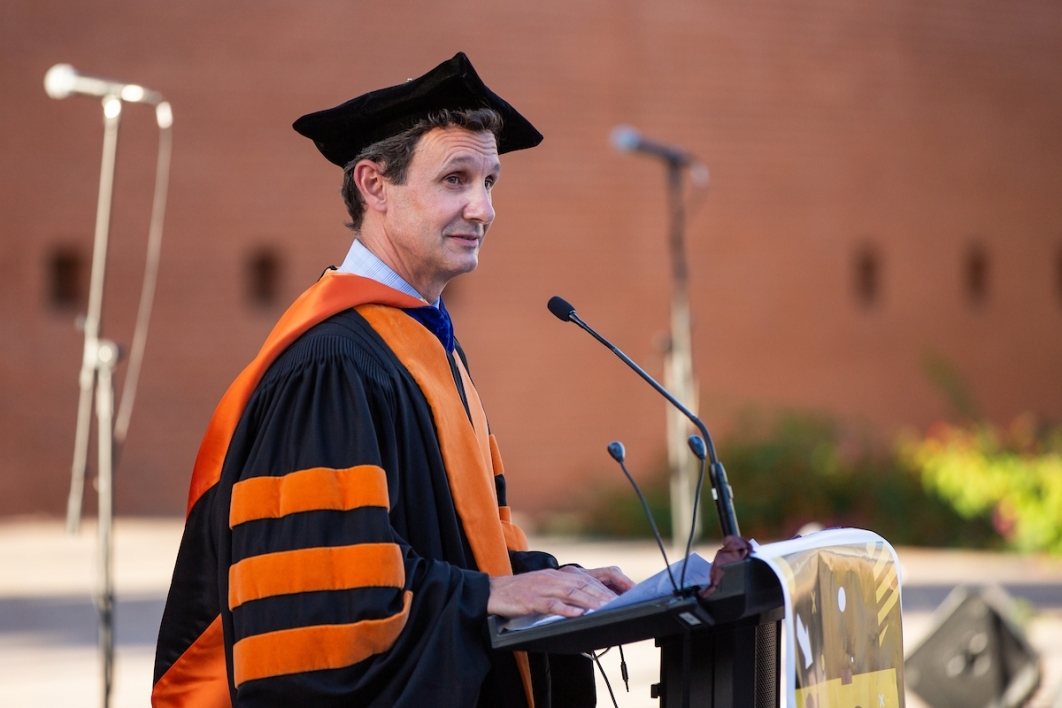 Herberger Institute for Design and the Arts Dean Steven Tepper addressed students at the School of Music, Dance and Theatre celebration: "It is through you and through your bodies that our shared culture comes to life."

New graduate Liuyi Jiang is looking forward to returning to her hometown in China for the summer before pursuing a master’s degree at ASU in the fall.

“It’s been two years because of COVID and I want to see my family,” said Jiang, who would like to be a stage actor. She earned a degree in music theater performance.

“’Miss Saigon’ is my dream role and my favorite show,” she said. She performed the song “Movie in My Mind” from that show for the graduating class showcase.

“I explored all the characters and the whole show in my junior year. I analyzed the lyrics and the story and I watched the show at Gammage. I used a student ticket and was very, very close to the stage.”

Steven Tepper, dean of the Herberger Institute, told the graduates that they represent the embodied expression of artistic ideas.

“It is through you and through your bodies that our shared culture comes to life. I don’t think there is anything more noble than to put your entire being, mind and body, in the service of expressing creativity and art.

“And we are so grateful to you for dedicating that full self.”

Top image: Liuyi Jiang performs with her fellow graduates before the graduation celebration of the School of Music, Dance and Theatre on May 4 in the Nelson Fine Arts Center courtyard on the Tempe campus. Photo by Deanna Dent/ASU News 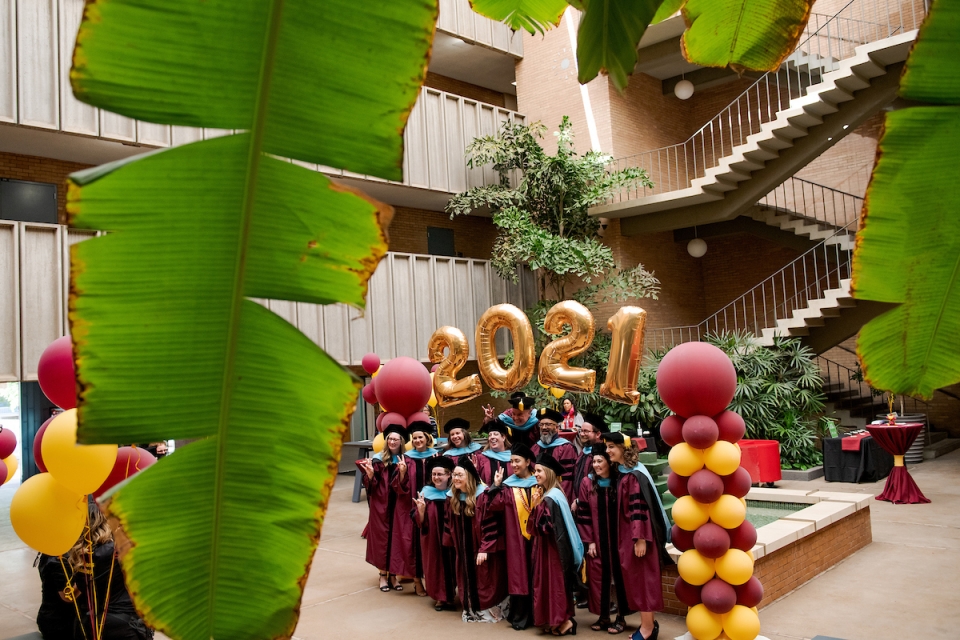 Students gather in the Farmer Building atrium for a photo following the Mary Lou Fulton Teachers College doctoral hooding ceremony on May 4. Photo by ASU 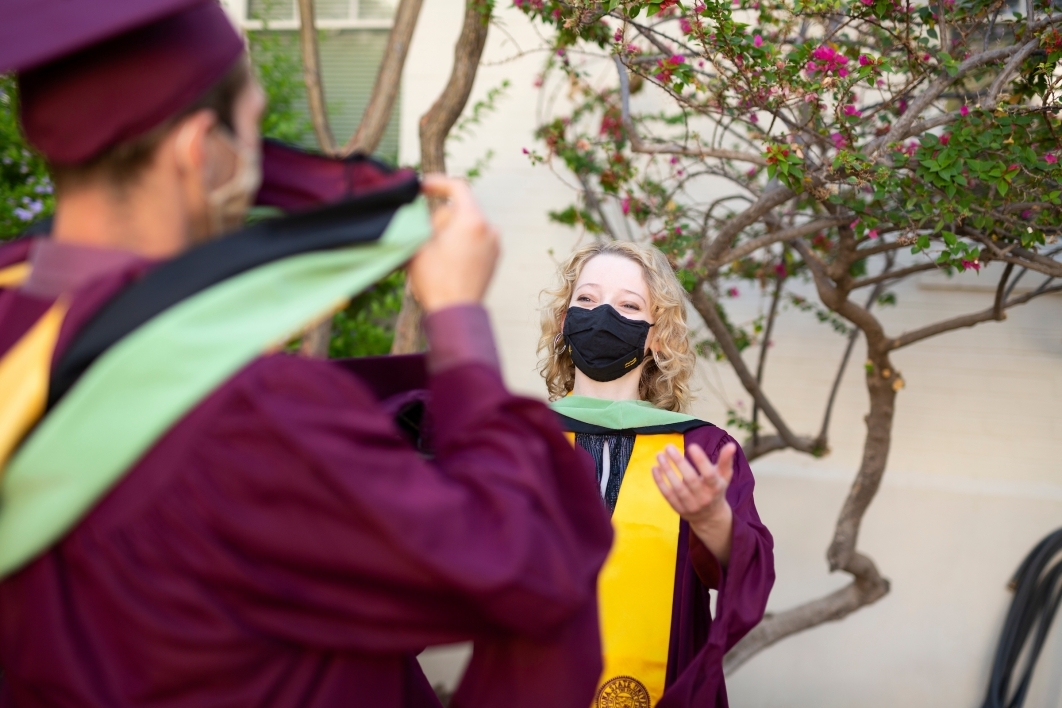 Christa Burgess laughs as she helps her classmate with his graduation regalia in the Secret Garden on the Tempe campus. The College of Global Futures hosted its first graduation celebration in on May 3. 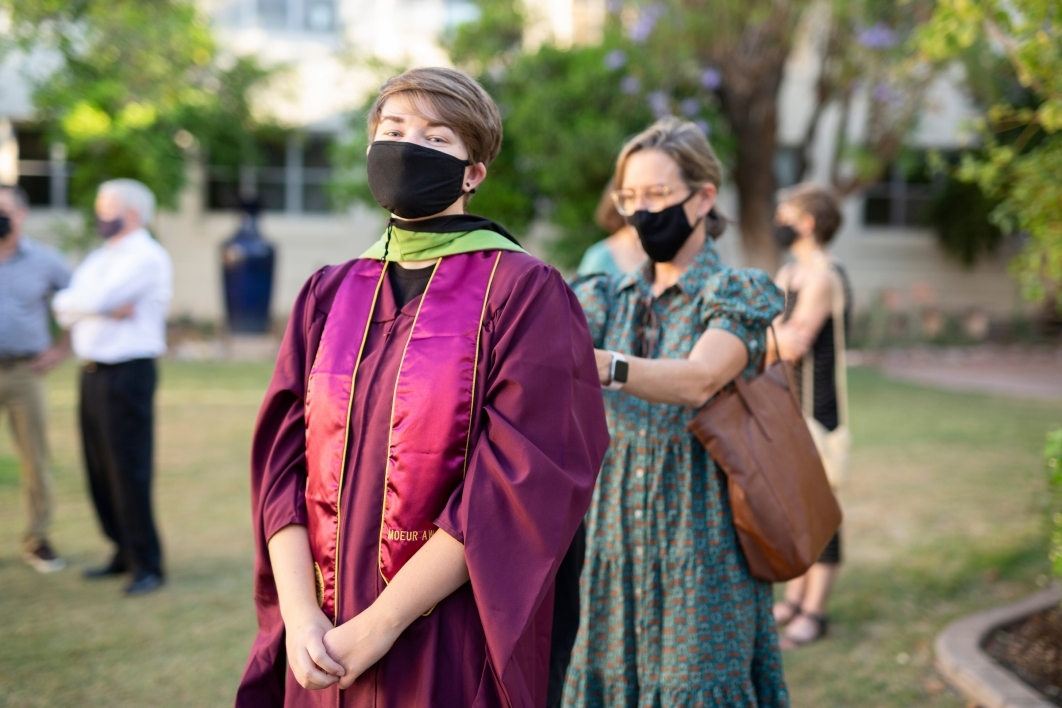 Moeur Award recipient Paige Anglin gets a little help adjusting their regalia prior to the College of Global Futures in-person celebration. The Secret Garden near West Hall on the Tempe campus was a prime location for a socially distanced, small in-person celebration for the graduates of the College of Global Futures. 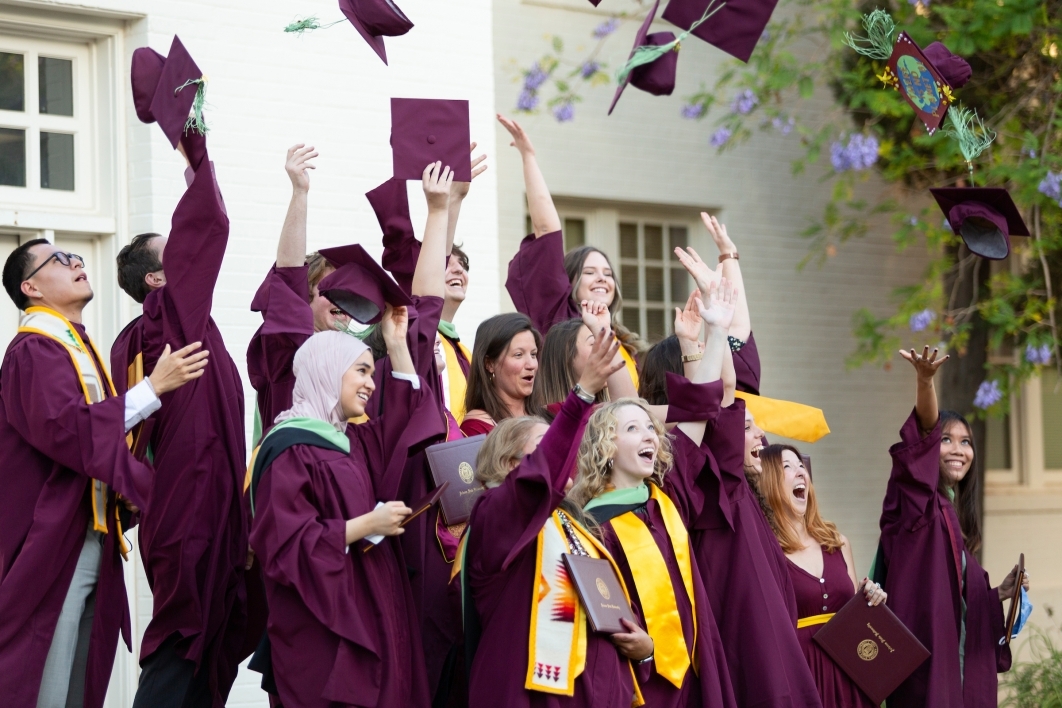 The proud new owners of Master of Sustainability Solutions degrees celebrate in a small gathering on May 3. 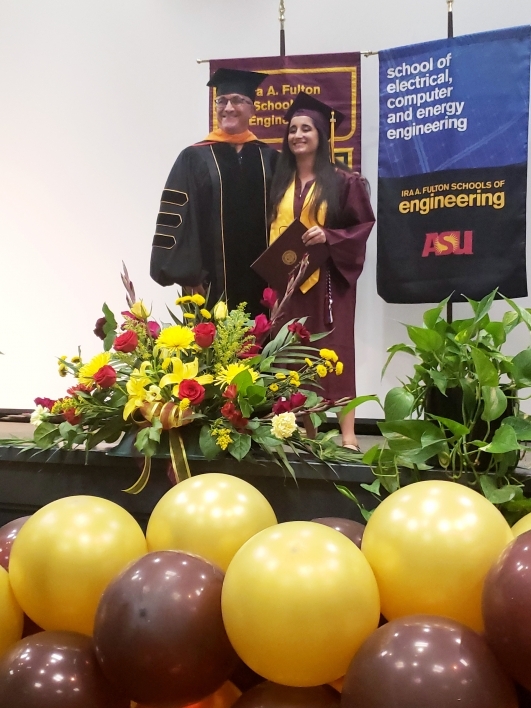 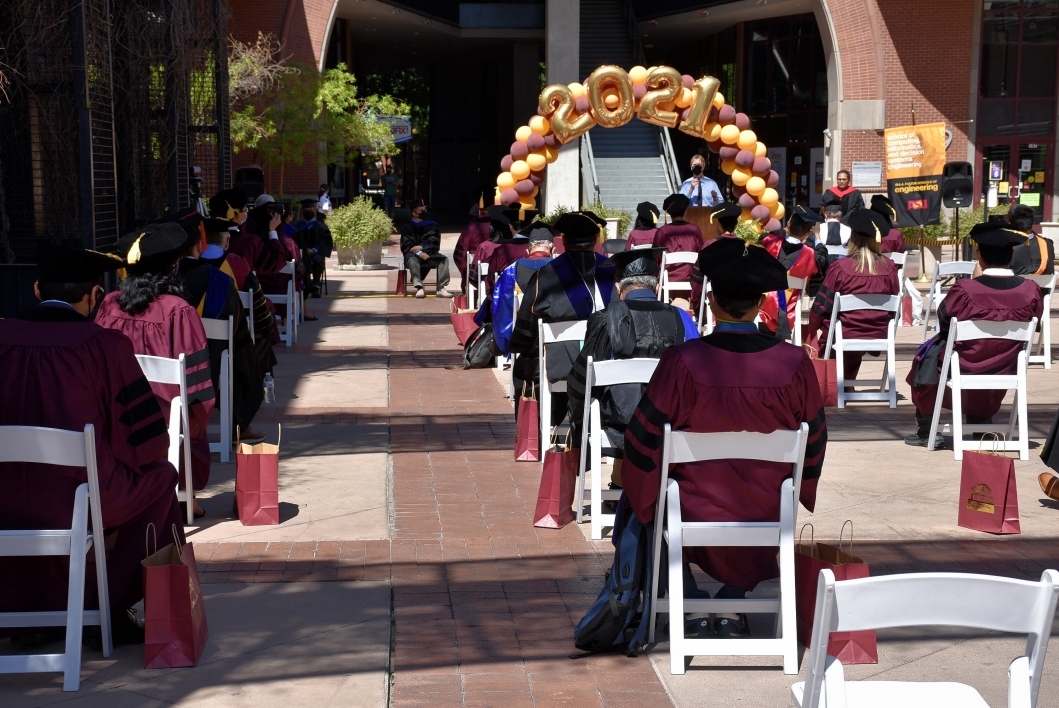 Kyle Squires (under balloon arch), dean and professor in the Ira A. Fulton Schools of Engineering, addresses doctoral candidates and faculty from the School of Computing, Informatics, and Decision Systems Engineering in the courtyard at Brickyard Artisan Court on Tuesday, May 4. 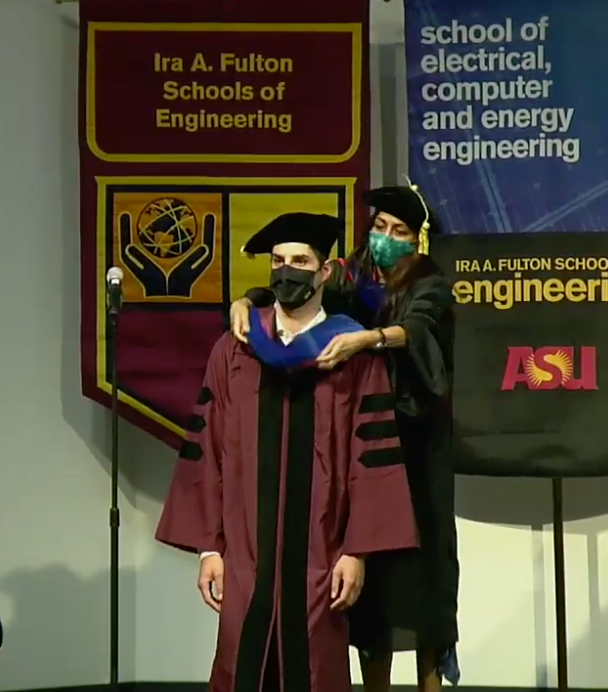 Electrical engineering doctoral candidate Andrea Pinceti receives his hood from Associate Professor Lalitha Sankar at the School of Electrical, Computer and Energy Engineering PhD hybrid celebration that took place in Neeb Hall and virtually, on Monday, May 3, 2021. Friends and family were able to watch the hooding event via Zoom. 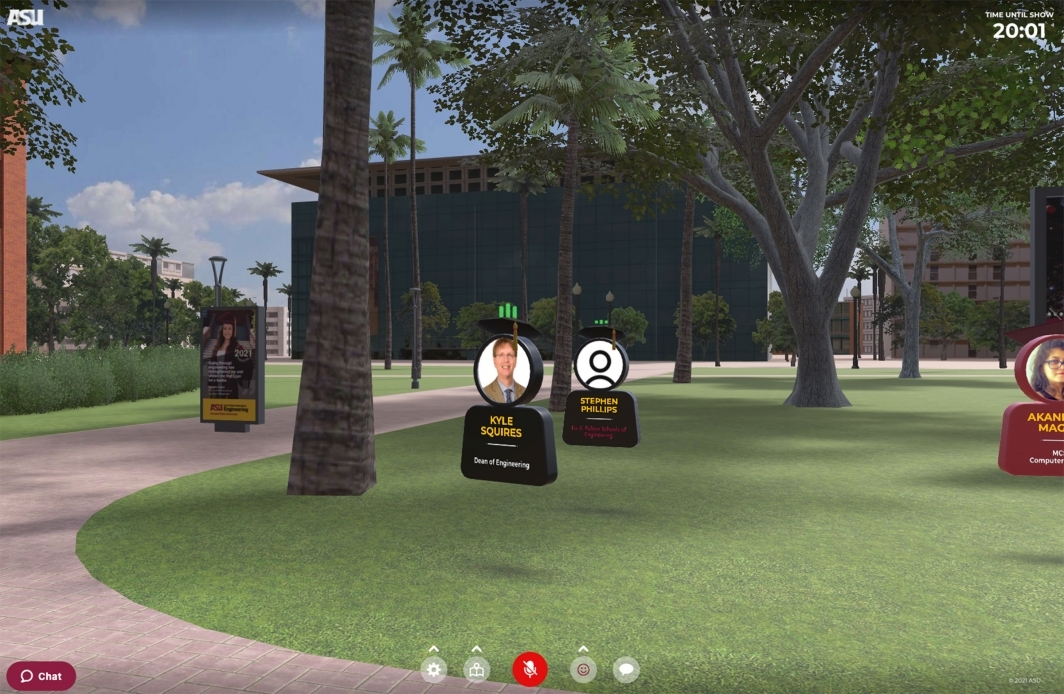 Not exactly in person, but the Ira A. Fulton Schools of Engineering hosted a live, virtual convocation in a 3D environment. On May 3, faculty, graduates and guests were able to talk and celebrate on Old Main Lawn and then watch the ceremony in Sun Devil Stadium. 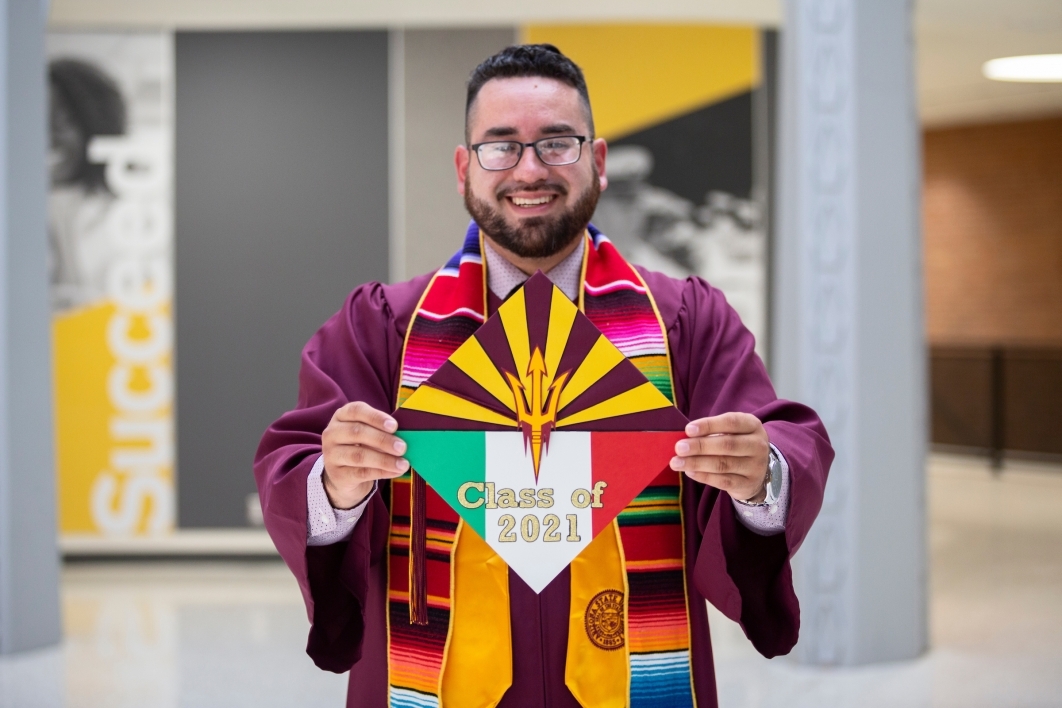 Jonathan Madrid shows off his decorated mortarboard on Tuesday, May 4, at Armstrong Hall. The College of Liberal Arts and Sciences celebrated around 4,000 graduates, the biggest graduating class at ASU in a specific school, by handing out swag bags and providing plenty of photo opportunities. Amy Cable (middle), a senior graduating with degrees in film and geography, and her parents, Adele Cable and Jason Short. From just outside of London, the two had to quarantine for four weeks to attend their daughter's celebration. After graduation, Amy plans to attend graduate school for film law in the United Kingdom. “It’s like a dream come true. I’m so proud of her,” Adele Cable said. 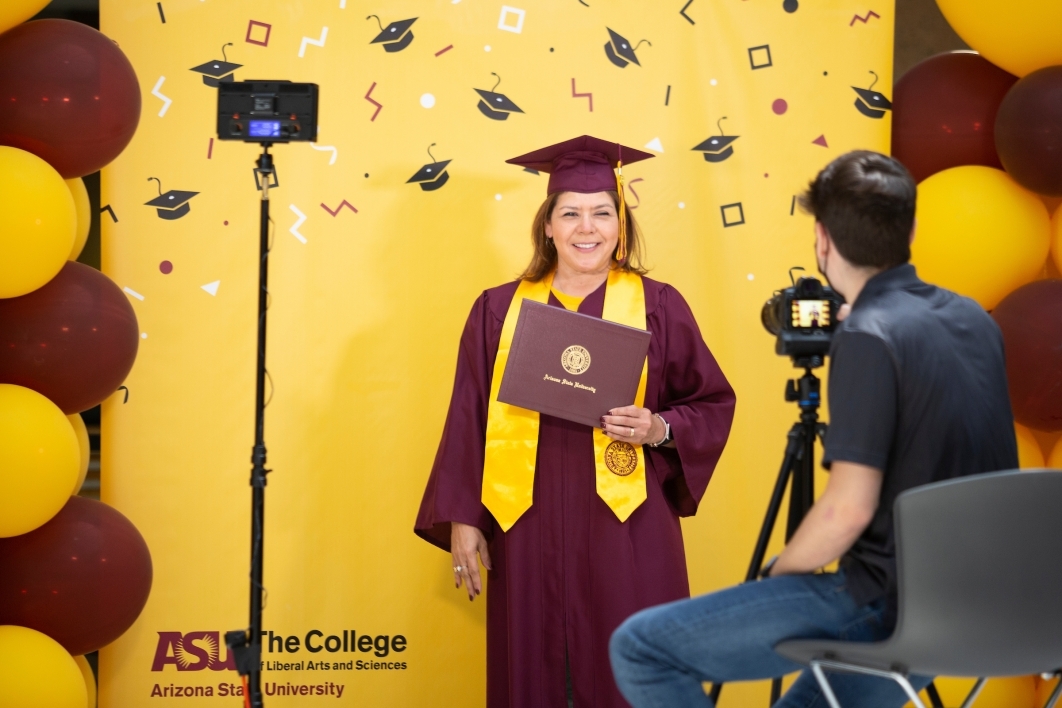 Communication graduate Kristine Urquieta poses for a photo during The College’s graduation celebration on May 4 at Armstrong Hall. 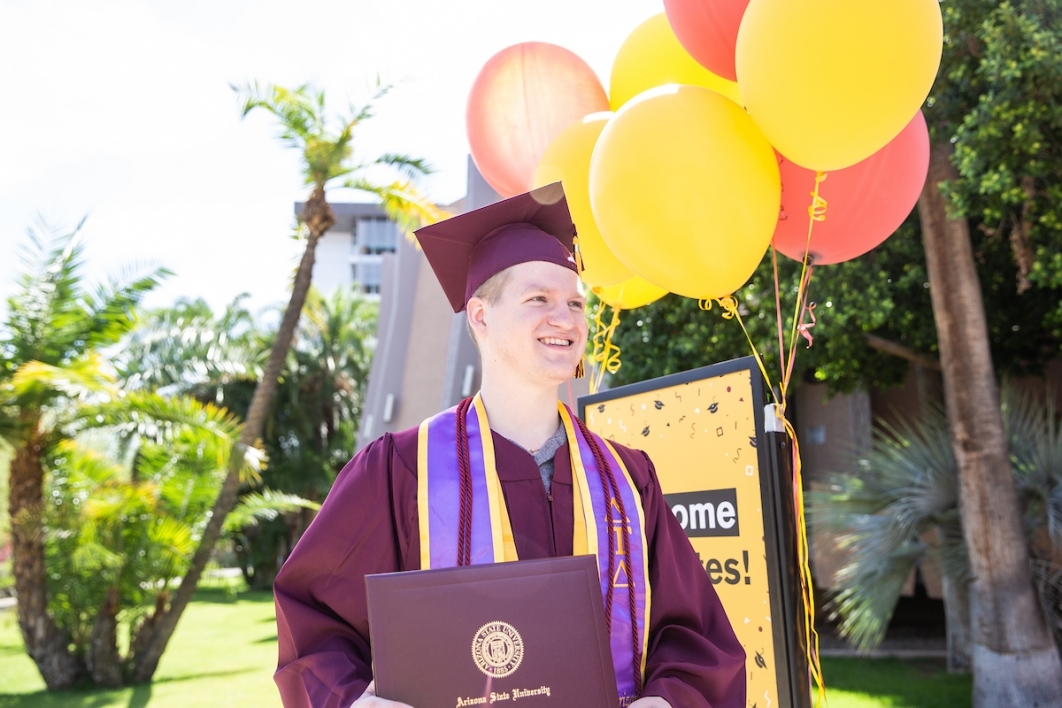 Communication graduate Dylan Berke attended an in-person celebration for The College of Liberal Arts and Sciences at the Tempe campus on May 5. 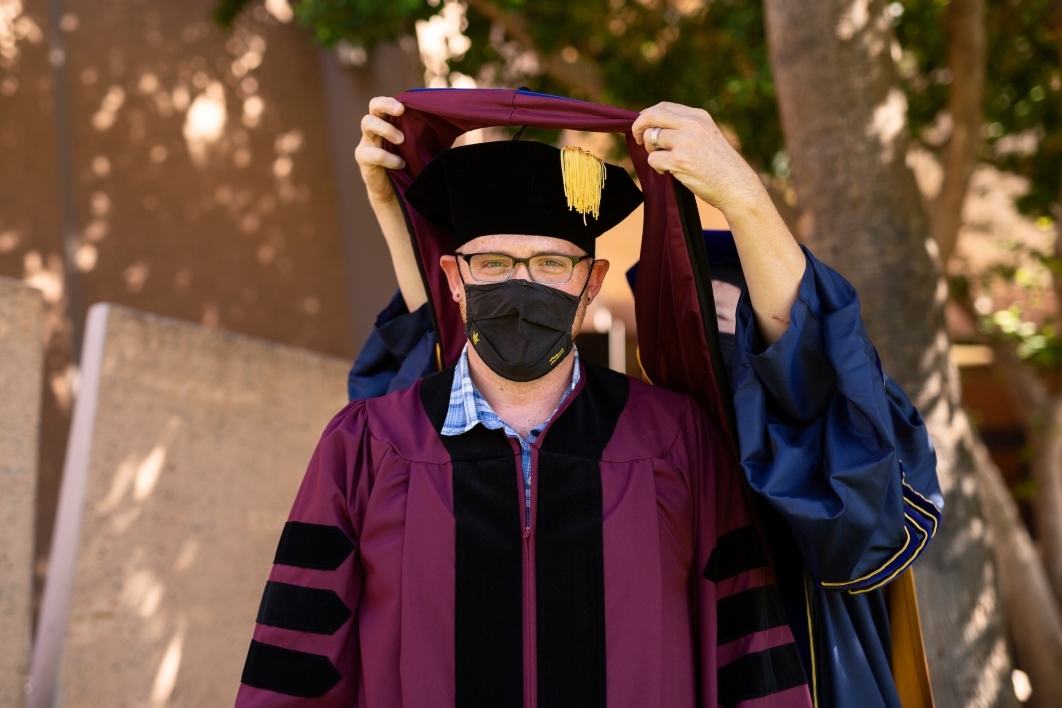 Top photo: Undergraduate musical theatre graduates sing as a choir before the start of the Herberger Institute of Design and the Arts School of Music, Dance and Theatre convocation on the afternoon of Tuesday, May 4, on the Tempe campus. Photo by Deanna Dent/ASU