Editor's note: This story is part of a series of profiles of notable spring 2021 graduates.Keala Busse is a first-generation Arizona State University student who entered college unsure of what major or career path she wanted to pursue. She first declared a global studies major, but later changed her major several times to psychology, biological sciences, economics and neuroscience. Eventually, s...

Sun Devils Welcome Many Teams, Games and Events in 2020-21

Keala Busse is a first-generation Arizona State University student who entered college unsure of what major or career path she wanted to pursue. She first declared a global studies major, but later changed her major several times to psychology, biological sciences, economics and neuroscience. Eventually, she found her true passion in political science, public service and public policy. 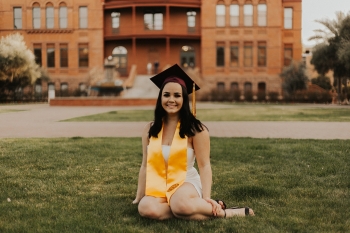 “I always knew I would get the most joy out of a career that was spent working with people and seeking to understand human behavior and decision-making, but I didn’t know if that was going to be explored through a more quantitative degree or a more qualitative one,” Busse said.

This spring, she will graduate from The College of Liberal Arts and Sciences with two bachelor’s degrees — one in political science, and one in public service and public policy — with a concentration in law.

Although the path to discover her passions wasn’t always clear, now Busse feels ready to put her degrees to work and pursue a career serving the community.

"When I arrived at ASU I didn't know what I wanted to spend the rest of my life doing,” she said. “Now I am leaving ASU with passions and goals to carry me into a career in the public sector. I was able to grow in ways I couldn't have at any other university thanks to the flexibility of the curriculum at ASU and the push to be involved on campus from those employed by the university.”

Busse said some of the best and most transformative experiences she had at ASU took place outside of the classroom. During her first two years at ASU she became involved with the Women’s Coalition as an intern and as secretary. She also served as senior editor for HerCampus at ASU, an online magazine dedicated to, written by and focused on empowering college women.

“I think that being involved in organizations in which there were primarily women allowed me to embrace my feminine identity and helped instill a certain level of empowerment to fight for myself that I didn’t have when I came to college,” she said.

She also participated in an internship with the Office of Phoenix Mayor Kate Gallego, and served as a senator for student government on ASU’s Downtown Phoenix campus. She shared more about her experiences at ASU and what’s next for her.

Question: Did you have an “aha” moment when you realized you wanted to study your major(s) or what drew you to the degree program?

Answer: I ultimately ended up declaring my major as political science after becoming involved in the Women’s Coalition and learning about all the ways in which our lives are impacted by our intersectional identities and our institutions and never looked back. Once I became further interested in politics in general and interned for the office of Mayor Kate Gallego, I found the policymaking to be the most impactful part of politics and knew I wanted to have a say in policies that impact those in my community and went on to declare public service and public policy as my second major.

A: I would say I learned more from my peers in the classroom than I did from the course content. Listening to my peers, especially those in my political science classes, I realized that we all experience life differently. I know that might be a simple thing to realize that most people realize in high school, but I think you come to understand different lifestyle choices and the significance of someone’s past in college in a way you don’t at any other time of your life. My peers have allowed me to be more open-minded and develop empathy in a way I couldn’t in high school and it has made me a better person.

Q: Did you receive any scholarships or financial support while at ASU? If yes, how did those impact your experience?

A: I received the Presidential Scholarship, which essentially covered tuition in full for four years. I also received a variety of grants like the Pell Grant and the University Grant as well. Without the scholarships and grants, I definitely would have had to take out a tremendous number of loans. I am beyond grateful for the funding I received from ASU.

A: Don’t tie your identity to your titles. There were so many occasions over the last four years when I questioned who I was when I lost certain titles or failed to be the person those roles expected. Sure you may be someone’s sister, someone’s best friend, an intern, a student, an athlete, a fraternity member — but who are you when those things are gone? Are you happy with the person you are when you're no longer the friend, student, girlfriend or intern you once were? I wish someone would have asked me that because I wasn’t happy and it took a lot of work to get myself to look deep down and find happiness within myself.