The research, done by the Morrison Institute for Public Policy, showed that exposure to three or more “adverse childhood experiences,” or ACEs, such as drug abuse or violence in their homes, was associated with $260 million in Medicaid spending – about 16% of the total for 2019.

The work is important because researchers have long known about the poor health outcomes associated with adverse childhood experiences, but policymakers typically need to see hard numbers on cost benefits before making changes.

“The purpose of the study is to determine the association between ACEs in Arizona and health outcomes later in life and the cost of these outcomes,” said Erica Quintana, senior policy analyst at the Morrison Institute and one of the authors of the report, which is titled “Cost of Adverse Childhood Experiences in Arizona.”

“I hope this report gives people some numbers and language to talk about ACEs in terms of cost, and that we can facilitate discussion on how preventing ACEs or reducing the number of ACEs might save money and suffering in terms of health care.”

Adverse childhood experiences are common. The Morrison report found that about two-thirds of Arizona adults surveyed in 2018 reported they had at least one ACE.

A famous study in 1998 found that the more ACEs a person experienced, the higher the likelihood that they would have chronic illness as an adult, such as heart disease, cancer or diabetes.

Because those illnesses are among the most expensive to treat, some states have tried to pinpoint the health care costs generated by people with childhood trauma. But every state that’s done so has used different criteria for determining the cost.

The Morrison Institute report is the first to estimate the cost in Arizona, and Quintana cautioned that the $260 million figure is conservative and that the total cost is likely much higher.

“This is only the amount paid by Medicare,” Quintana said during a webinar on April 22 that discussed the results.

“This doesn’t include copays, deductibles, private insurance or lost work production or wages.”

The Morrison Institute researchers arrived at the $260 million figure this way:

The webinar included several health-care experts who weighed in on the results.

Amy Shoptaugh, a pediatrician and the director of the Center for Resiliency and Wellbeing at Phoenix Children’s Hospital, said that quantifying the cost of childhood trauma is important.

“If we are able to prevent ACEs and treat it early, we don’t know what the outcome is. We can’t show what the return on investment is for that. To put a number on that is difficult and that makes it hard to change policy,” she said.

“You won’t know how much money you’re saving.”

Shoptaugh said that positive experiences can “buffer” the effects of adverse childhood experiences. That’s why it’s important for people to realize that experiencing an ACE does not necessarily mean a person will have a poor health outcome.

“Someone might have one ACE but no buffer, or seven ACES and many buffers,” she said.

“We don’t normalize parent education. It’s seen as something for people who are required by the courts to go to a parenting class,” she said.

“Parent education is often seen as punitive and something for when things go wrong. But everyone needs help at some point with parenting.”

Cimino said that when she talks to parents about resiliency, she often tells them to imagine that their child’s life is a journey.

“You’re packing that child’s suitcase. What is the one thing you would pack in their suitcase to take with them and how do you teach them that?”

Editor's note: This story is part of a series of profiles of notable spring 2021 graduates.Stephanie Pham says she never doubted her decision to take six years off from school and work to be a full-time caregiver to her parents, each of whom had been diagnosed with different forms of cancer. When she enrolled at ASU as an undergraduate, at first the student from Temecula, California, felt alone....

Married to the military

Stephanie Pham says she never doubted her decision to take six years off from school and work to be a full-time caregiver to her parents, each of whom had been diagnosed with different forms of cancer. When she enrolled at ASU as an undergraduate, at first the student from Temecula, California, felt alone. 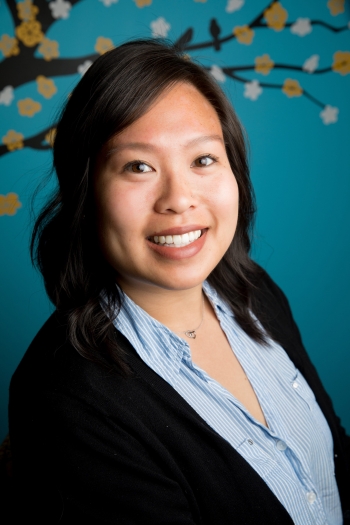 Stephanie Pham is the spring 2021 Outstanding Graduate for the School of Community Resources and Development. Photo courtesy of Stephanie Pham Download Full Image

“When I moved here I knew no one, so it forced me to get involved and really develop and be part of the community here at ASU,” said Pham, the spring 2021 Outstanding Graduate in the School of Community Resources and Development, part of the Watts College of Public Service and Community Solutions. “It is within this school that I found people who became family and my community. This school has become my second home, so when it came time to look at grad schools, although I was offered many great opportunities to continue education elsewhere, my heart and gut told me that I am not done with ASU.”

Pham, who is receiving a Bachelor of Science in nonprofit leadership and management, said her experience as a volunteer led to her decision to dedicate her career to helping the less fortunate.

“Being a first-generation Asian American, raised by refugee parents, from an early age my parents instilled in me and my siblings the value of hard work, service, gratitude and paying it forward. We volunteered in our community growing up, and by the time I was old enough to do service projects on my own, they came second nature to me,” she said. “There was never an ‘aha’ moment, as I have always had the passion to serve my community. But I do remember the moment feeling I wasn’t living my true purpose.”

She was listening to an anatomy and physiology class lecture about all the bones in the foot and started to daydream about the volunteer work she was involved in.

“Fast-forward one year later: I was sitting in Anne Kotleba’s voluntary action course at ASU and I remember listening to the lecture, being completely engaged. For the first time, my heart was glowing, and I knew I was finally in the right place where I needed to be.”

Read on to learn more about Pham’s ASU journey:

Answer: That I went into this sector thinking that I would make such a great impact or change. But really, “big philanthropy” is a detriment to the social sector as the divide in wealth inequality deepens. The 1% are giving billions, while they have seen a decrease in the amount of individual giving from the average American. Throwing money at a problem doesn’t stop or solve the issue. We need to work on a systemic level together to make long-lasting, grand-scale changes.

A: This is so hard to just choose one person. I am a firm believer that the community you surround yourself with is one that should challenge you to think critically and be your best version of yourself. I have that here at ASU. So many professors who have touched my life and lessons that they have imparted on me stretch far beyond the walls of UCENT that I will carry with me forever.

A: Take this time to really discover yourself and your passions. Doesn’t matter where you are at in your life, school or career, you are never too old to find something that makes your heart glow.

Q: Where was your favorite spot to study, meet friends or to just think about life?

A: My favorite place to study was the fifth floor of the law library on the downtown campus. It was a hidden gem. There is an outdoor courtyard with beautiful trees to study under and twinkly lights (that are rarely on at night), and the environment is everything for me.

A: I have applied to the Master of Social Work and Master of Public Administration degree programs at ASU. I will also continue to work at both my jobs. I am the programs coordinator at the Children’s Skin Disease Foundation, whose mission is to improve the lives of children with life-threatening and chronic skin disease and their families by offering wonderful experiences that will enrich their lives and empower them to have a childhood without limits. I am also the volunteer and service coordinator at Arizona Cancer Foundation for Children, whose mission is to provide social, emotional and financial support directly to families managing the health and well-being of a loved one with pediatric cancer.

A: I would focus on global health and primary education. I wholeheartedly agree that children are our future. If we do not invest in their health and education, we will set ourselves up for more issues down the line. Studies have shown malnutrition plays a large role in the overall health and mental well-being of a child. Without the proper nutrients and care during the developmental stages, long-term physical issues may hinder the child from reaching their fullest potential. Eliminating these issues would aid in the development and prosperity of impoverished communities, improving basic human rights and promoting stability.