No. 20 Sand Devils Get Back-To-Back Sweeps Editor's note: This story is part of a series of profiles of notable spring 2021 graduates.In the two decades since he graduated high school, Peter Rozenberg joined the Air Force, married his wife, had two daughters and started a career as a quality assurance analyst. Now, the ASU Online student is adding another milestone to his life’s story: college graduate.This spring, Rozenberg is graduat...

In the two decades since he graduated high school, Peter Rozenberg joined the Air Force, married his wife, had two daughters and started a career as a quality assurance analyst. Now, the ASU Online student is adding another milestone to his life’s story: college graduate. “I almost cried when I saw that diploma come in the mail because it was a culmination of 20-some odd years of pushing it off,” he said.

Rozenberg grew up in Las Vegas and after graduating high school in 1999, went to the University of Nevada, Las Vegas. He said he liked school, but after two years of classes, ultimately decided to leave and join the Air Force. In the years following, he attended classes at various schools near where he was stationed with the military but was never focused on a dedicated degree program.

“When I got out of the military, I got married and school kind of went by the wayside, I had a family and it wasn't anything that was necessary at the time,” he said. “I'm a QA analyst now; I look at websites all day, so a degree wasn't required. … I now have two little girls and I wanted to be an example to finish what you started and to impart on them the value of education and staying in school and learning. I've always loved learning whether it's actually in a degree-granting environment or not. I wanted to give them that same kind of spirit.”

For other students considering a nontraditional path in higher education, Rozenberg said he believes that everyone’s path is different, and the reward is worth the work.

“There's no right or wrong way to go about it, just do what you love and get it done,” he said. “There's no shame in being a 39-year-old grad and I'm sure there's many people that are much older than I am. I'm just so overwhelmed by it, I want everyone else to feel that same overwhelming feeling.” 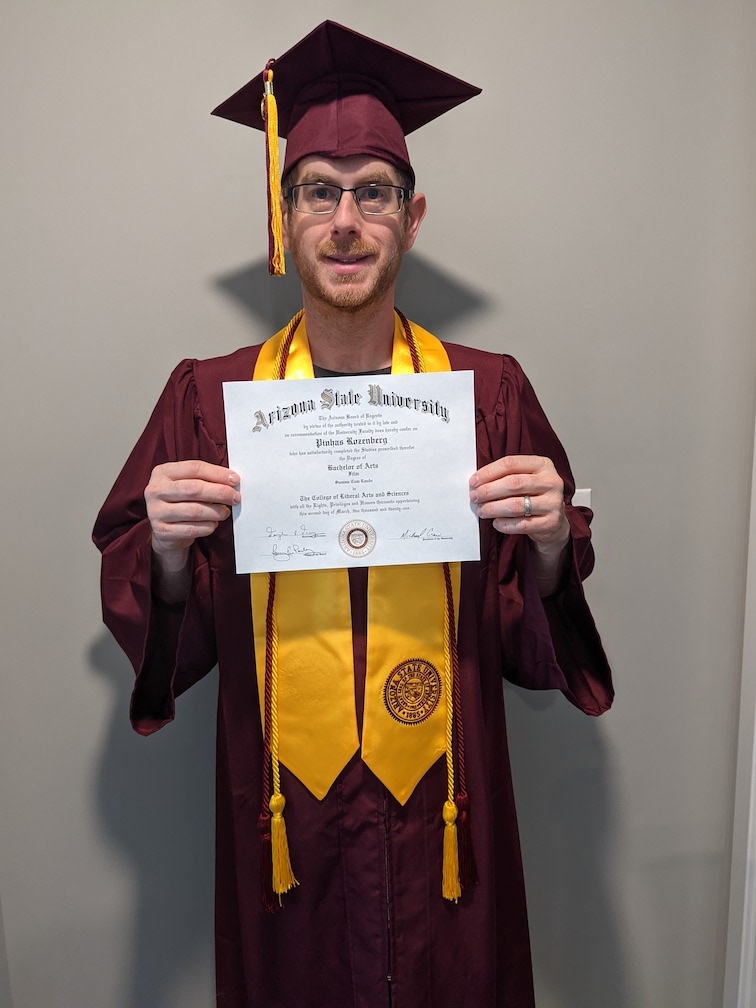 Question: Why did you choose ASU/ASU Online over other online or local options?

Answer: Primarily, I just liked the reputation that ASU had. I had some friends that had gone to ASU before – I originally grew up in Las Vegas, so I went to UNLV for a little bit — and we had a lot of people that ended up going to ASU. When I finally decided to really pursue my degree in earnest, I knew I wanted a film degree. I looked around at some other colleges that I've gone to before and some other local schools and I thought, well, let me check if ASU has one and they did so I immediately signed up for it.

Q: What drew you to the film and media studies program?

A: I've always loved film. It has been a big part of my life; I've always been involved in either some theater or film to some degree or another. While I don't particularly plan on going to Hollywood and being the next big director or something like that, the history of film and the conceptual parts of it really drew me in. It's something that I was always interested in and I toyed around with different degrees throughout the years but I’ve always gone back to wanting a film degree.

A: Philip Taylor — there was just something infectious about his ability to transfer the material to engage us even as an online class. It was by far the best class that I've taken at ASU. What I learned from him was to just love what you're doing. You could tell he loved what he was doing. He had all these life experiences that he shared and his lectures were just chock full of actual, real-world examples, not things that he just read out of a book.

Q: What message or advice would you share with other individuals considering a return to school after a break?