For George H. McCaskey, Chicago Bears chairman and two-time Arizona State University alumnus, after working in the “real world” of sports for 30 years, he wanted to continue his legal education. So pursuing a Master of Laws (LLM) degree in sports law at ASU “just made sense.” 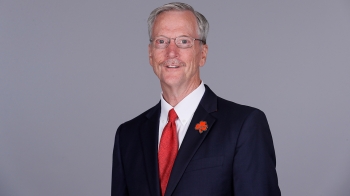 “Since I got my undergraduate degree from ASU, as well as my JD (from the Sandra Day O’Connor College of Law at ASU), it just made sense to pursue my LLM at SDO,” said McCaskey, who earned his ASU bachelor’s degree in broadcasting in 1978 and his ASU Law degree in 1981. “Dean (Douglas) Sylvester and Associate Dean Eric Menkhus were great about working around my schedule and with class selection, and the ASU Law for Life scholarship program made it easy to make the commitment.”

One of the 13 grandchildren of George Halas, the founder and patriarch of the Chicago Bears, McCaskey, along with his brothers and sisters, grew up around the Bears. His first part-time job, at age 14, was as an office assistant at the team’s headquarters in Chicago’s Loop. He later worked for several summers as a ball boy at Bears training camp, calling it one of the best experiences of his life.

McCaskey previously served as the team’s senior director of ticket operations, working in the ticket office for 20 seasons, joining the Bears in 1991 as ticket manager. He has been a member of the Bears’ board of directors since 2004.

After earning his JD, he passed the Illinois bar exam in 1981, but now describes himself as a “recovering lawyer.” He worked in television news in Phoenix; Peoria, Illinois; Tulsa, Oklahoma; and Chicago, before serving as an assistant state’s attorney in Lee County and DeKalb County, Illinois.

Answer: It wasn't really a surprise, but just reinforced what I learned long ago – that time management and sticking to a schedule are crucial to completing the work on time. That really hit me when I was pursuing my JD degree, and came back to me all these years later.

A: Daniel McIntosh. Hands down. He taught sports analytics, and I thought the course was going to be the death of me, because I had no background in statistics. But, he never gave up on me. He refused to let me fail. You can tell he cares deeply about his students. His passion for teaching is an important lesson for me.

Q: What’s the best piece of advice you’d give to those contemplating ASU Law, and those still in law school?

A: If you're contemplating law school, go into it with your eyes wide open, because it's a big commitment. If you're in law school, stick with it; the end is in sight!

A: Right now, I have the best job in the world, but I think I'd like to teach, at least part time. In one of our classes, Human Resources and Employment Law, we had an exercise to determine which careers would be a good fit. Turns out, I’m well-suited to teaching. I think I’d like it, and I hope I would be good at it.

A: Hunger. In our own country, people are being paid to not produce food, but children go to bed hungry. It makes no sense.