Anthropology graduate took her education across the Pacific

Though Morgan Kempf’s favorite place to study is on a tropical beach near her home in Guam, her journey to graduation was not always a breeze. 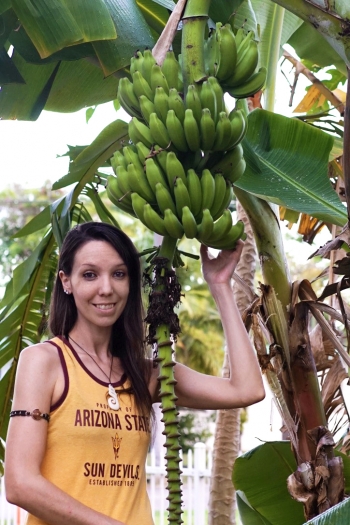 An academic adventure that began for Kempf in 2005 is about to be completed, 16 years and three cross-ocean family moves later. She will be graduating from Arizona State University this spring with a Bachelor of Arts in anthropology and a minor in global health from the School of Human Evolution and Social Change.

Kempf, from San Antonio, Texas, is now a military spouse and a mother to five children. She started college after high school but wanted to focus on raising her first child with her husband after finishing freshman year.

In 2016, she decided it was time to return to school. She began by taking earned admission classes through ASU Online while caring for her family during their military assignment in Japan.

Kempf orchestrated an international move with her family to Guam for her husband’s next assignment, which is where she completed the bulk of her ASU coursework. Guam is a 17-hour time difference from Tempe, Arizona.

Kempf has been a stellar student – maintaining a 4.12 GPA. Her dedication to multiple research projects, undergraduate clubs and volunteering shows her love for learning and advocacy.

Kempf is a founding member of Be You ASU, LGBTQIA Sun Devils and Allies, inspired largely by her son, who is transgender. She received The College of Liberal Arts and Sciences Student Leader award in 2020 in recognition of her leadership.

She also is a volunteer community outreach specialist for NASA’s Jet Propulsion Laboratory and has executed 75 community events over four years.

After graduation, Kempf plans to attend an online master’s degree program and will be preparing her family for another international move.

She shared more about her academic research and experience at ASU.

Answer: I chose ASU out of several online programs I was accepted into because of their frequent partnerships with NASA. I’m a volunteer public outreach educator for the Jet Propulsion Laboratory Solar System Ambassador program and I put together events for military communities. All of my favorite NASA mission projects usually had the ASU logo on them, too. Even though, at the time, there was not an astronomical degree offered online, I knew ASU would have to have caliber camaraderie if they were partnering with NASA. And, ASU is known for being a military-friendly school. Plus, it doesn’t hurt that Donald Johanson teaches at ASU, and the famous Institute of Human Origins is at ASU.

A: Abigail York. She was my statistics teacher during our international move to Guam and then became my mentor during my research apprenticeship with her project. But the most impactful lesson she taught me didn’t have anything to do with either of those experiences. She made me realize I didn’t have to compromise being a mom for my education. She’s a mom and a published scientist and a professor. Her representation matters to me.

A: My “aha” moment came to me early, while I was in high school. My history teacher hosted an after-school “culture club.” He was an anthropology major before his years in the Navy and once I knew that you could go to another country and feel out of place in the culture, I wanted that experience. I wanted to know that and understand it. I loved this feeling during my years in Japan.

A: It would definitely have to be on my beach, by the nursery sharks. No one goes over there, and I can read without disruption.

A: Don’t be afraid to ask another school at ASU if you can take one of their classes if it’s something that interests you. I saw an opportunity to expand on an area of interest that related to my environmental anthropology research in a special topics sustainability course, so I just asked if I could take that class. Do something different that challenges your school of thought!

Editor's note: This story is part of a series of profiles of notable spring 2021 graduates.When it comes to sequels, the general consensus is they’re usually never as good as the original. But for Vicki Sowards, part two at Arizona State University was just as good for her, if not better than part one.  “It’s been a great second time around; I think I appreciated it more this time because...

When it comes to sequels, the general consensus is they’re usually never as good as the original. But for Vicki Sowards, part two at Arizona State University was just as good for her, if not better than part one. Vicki Sowards is about to earn her second degree from ASU more than three decades after earning her first one. Download Full Image

“It’s been a great second time around; I think I appreciated it more this time because I paid for it myself so I wasn’t going to play around or waste my time,” she said.

Sowards originally graduated from ASU in 1987 with a Bachelor of Science in nursing. Since then, she’s worked in a hospital as a floor nurse; at an ear, nose and throat practice; and is currently in a leadership role at Passport Health.

The decision to return to school came from a desire to “expand her brain” but finding the right fit in a master’s program took some work. After figuring out what she didn’t want to pursue, she found herself back on her alma mater’s website.

“I came across the Master of Healthcare Innovation and thought it looked interesting so I started doing some more research and the more I learned the more I liked it.”

With a focus on leadership and addressing health challenges through innovative thinking and teamwork, Sowards got a chance to put all those elements together through her capstone course.

Her project was centered around coming up with a new and more accessible way to distribute COVID-19 vaccines. A partnership between her company, Passport Health, and Maricopa County helped make this possible, but it was Sowards who ran the operational side of things and who came up with the idea for a walk-in clinic vs. a drive-thru.

“There was a lot of IT work behind the scenes to make our online scheduling tool more user-friendly, to ensure we could report our doses properly to the state, and so on. My goal was to make this process less of a burden for people. Everybody that came through was also automatically scheduled for their second dose, same time, same place, same procedure.”

Now poised to graduate with degree No. 2 from ASU, Sowards is sharing some sound advice and favorite moments from her very own sequel.

Answer: I’m one of those people that likes to think outside of the box. So if someone says, "OK, we need to do this," I’ll sit there and I’ll think about it until I come up with a way to do it. It drives me crazy until I figure out a different way and so the MHI just fits with my mentality and the way that my mind works.

A: This program has a lot of courses about leadership skills and about how to lead a team, how to treat a team and just how people work. I think that was the best thing that I pulled out of it. Even with this program that we’re running right now, I have so many moving parts and so many people that I have to get to place A,  place B, and people make mistakes, and so you need to know how to deal with people who make mistakes so that they can excel as well.

Also, I have a real problem with delegation even now, but when you get in a position where you have to do something, you get better at it. And so with the capstone project, it helped me learn to delegate a little bit better.

A: I think that you need to find your passion. If you’re in a class or program and you’re just not liking it or you can’t see yourself doing it for the rest of your life, you need to pull back and look and think, "Is this really what I want?" It’s a lot of money, a lot of time, and a lot of effort so if that’s not something you really want to do with your life, you need to change course and take some time to figure out what you want to do.

Even if you’ve completed your degree or are almost done, see if you can take a little bend, try a different class. You just need to be open and look for those opportunities and try something because you never know what is going to click.

A: I’m just going to keep on where I’m working right now. We are in a rebuilding phase where we are going to completely rebuild our operations department so I think that’s going to be a big project.