The Knowledge Mobilization Awards are an annual event celebrating the innovation and ingenuity of Arizona State University's graduate students and postdoctoral researchers. Sponsored by the Knowledge Mobilization Initiative at the Graduate College, the initiative helps researchers move academic knowledge beyond the university to put it into use — in current practice, informing policy change and collaborating with industry and/or community-based organizations. 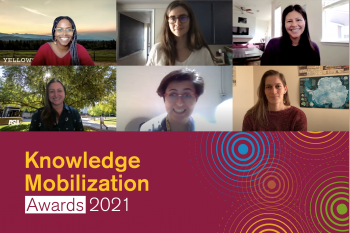 The 2021 pool of applications was historically large, including 116 applications from 23 academic units and over 70 programs. Applications were evaluated by an interdisciplinary review panel using the following criteria:

For this year’s virtual event, finalists showcased their research projects in small, informal round table sessions, discussing their experiences as early career researchers and answering questions from the audience. Six awardees were selected from the 18 finalists.

“We are incredibly pleased to see that students and postdocs from so many academic programs participated in this year’s Knowledge Mobilization Awards,” said Elizabeth Wentz, vice provost and dean of the Graduate College. "Knowledge mobilization is a research framework that calls for the discovery of public value through use-inspired research in order to transform society. It speaks directly to the ASU Charter and design principles. The fact that so many members of our research community see its value means that ASU will be well-prepared for the future of research.”

The beautiful risk of action-forward research

A panel of faculty experts discussed their professional experiences conducting applied and socially impactful research, as well as the need to use knowledge mobilization as a framework for graduate research that is action-forward. The panel included Gustavo Fischman from the Mary Lou Fulton Teachers College; Flavio Marsiglia and Laurie Mook from the Watts College of Public Service and Community Solutions; Vice Provost and Dean Elizabeth Wentz and Associate Dean Enrique Vivoni of the Graduate College.

The event concluded with a keynote address from Ronald Beghetto of ASU’s Mary Lou Fulton Teachers College. In a talk titled “The Beautiful Risk of Action-Forward Research,” Beghetto discussed the benefits of approaching research creatively, working through uncertainty, and finding opportunities to continually reflect and learn

Following his address, the six awardees were announced.

The full list of awardees and finalists for each category are:

Arizona State University employs many unsung heroes, like Paul Liddell, who devote their lives and careers not only to research, but to helping others. Liddell, an associate research professional in the School of Molecular Sciences, died in late February.Liddell, a native of New Zealand, came to ASU for his graduate work in chemistry in the early 1980s, initially working with George Pettit. Lat...

Arizona State University employs many unsung heroes, like Paul Liddell, who devote their lives and careers not only to research, but to helping others. Liddell, an associate research professional in the School of Molecular Sciences, died in late February.

Liddell, a native of New Zealand, came to ASU for his graduate work in chemistry in the early 1980s, initially working with George Pettit. Later, in 1986, under the direction of Devens Gust, Liddell earned his PhD as a synthetic organic chemist specializing in photosynthetic systems with an emphasis on porphyrins and carotenoids, key photosynthetic compounds. Liddell was hired by the ASU Center for Early Events in Photosynthesis, where he continued to work with Gust, the Moore research group and many other researchers who sought out his expertise in synthetic chemistry. 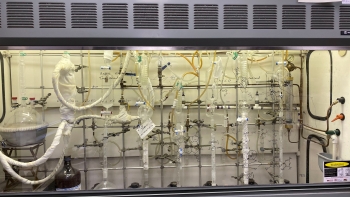 Throughout his career, Liddell contributed to many important scientific discoveries. He designed and prepared extremely complex multi-component molecules containing several chromophores, electron donors and/or acceptors, and photochromic switching units. These molecular constructs included artificial reaction centers that absorb light and store the resulting energy, and molecular antennas that can trap light and make it available for conversion to electrochemical energy.

“Paul was a synthetic powerhouse," Gust said. "His molecular preparations were studied by spectroscopists and electrochemists at ASU and in collaborating laboratories around the world.”

Among the many molecules prepared by Liddell were some that were examined collaboratively at ASU and Oxford University, which helped uncover the hitherto unknown mechanisms by which birds navigate using Earth’s magnetic field. While at ASU, Liddell coauthored approximately 100 publications, including several in Nature and the Proceedings of the National Academy of Sciences¸ and many in the Journal of the American Chemical Society.

Throughout his career, Liddell willingly shared his expertise with others, mentoring a steady stream of undergraduates, graduate students and postdoctoral associates in synthetic chemistry.

Postdoctoral associates who worked closely with Liddell observed, “He was always willing to help us with difficult procedures or designing synthetic alternatives related to our projects. He was always sharing his experiences as well as encouraging us with valuable discussions and kind words.”

“Paul Liddell showed me how chemists conduct themselves safely in laboratories," said John Crozier, ASU senior compliance officer. "I learned from Paul much about health and safety, particularly as it pertained to handling high risk chemicals.”

Ian Gould, interim director of the School of Molecular Sciences, observed that Liddell was very much appreciated as a colleague who was very friendly and generous with his time and expertise.

“Paul will be remembered not just for his hard work and outstanding scientific contributions, but as a kind, gentle and much-liked person who in his own low-profile way contributed much to the culture and scientific reputation to the School of Molecular Sciences," Gould said.

"Paul Liddell was a loyal and generous friend to his coworkers and at the same time was intensely private. The image of Paul’s busy lab in this article will be familiar to everyone who knew him and his work. Paul was a cherished member of the SMS family, and our friend; we will miss his companionship and invaluable expertise."
University News Tempe campus School of Molecular Sciences The College of Liberal Arts and Sciences Research Renewable energy Science Faculty