This spring, the Interplanetary Initiative held a tournament where ASU undergraduate students became citizens of an early Martian community charged with working together to survive, and thrive, far from home.The tournament, aptly named "Mars Madness," involved an online game called Port of Mars where players are assigned characters and use a dashboard to make decisions, monitor changes and chat wi...

This spring, the Interplanetary Initiative held a tournament where ASU undergraduate students became citizens of an early Martian community charged with working together to survive, and thrive, far from home.

The tournament, aptly named "Mars Madness," involved an online game called Port of Mars where players are assigned characters and use a dashboard to make decisions, monitor changes and chat with other players. 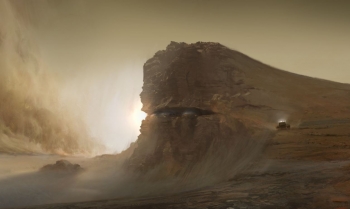 “Port of Mars is a social science experiment cosplaying as a game,” said Interplanetary Initiative Associate Director Lance Gharavi, who leads the Port of Mars project. “The purpose is to discover how best to sustain future human communities in space and on Earth.”

In essence, the game is a platform for running social science experiments to learn more about how people can effectively navigate "commons dilemmas" – where individuals must choose between actions that benefit their entire group and ones that benefit only themselves.

“Future human space communities will have extremely limited resources, and will need to effectively manage such dilemmas in order to survive and thrive,” said Gharavi, who is also an associate professor at ASU’s School of Music, Dance and Theater. “Of course, what we’re learning will be useful for similar challenges here on Earth.”

Port of Mars was designed by Michael Yichao of Wizards of the Coast and began as a tabletop game with cards and tokens. It was then adapted to a digital format to allow more people to play and to play together. 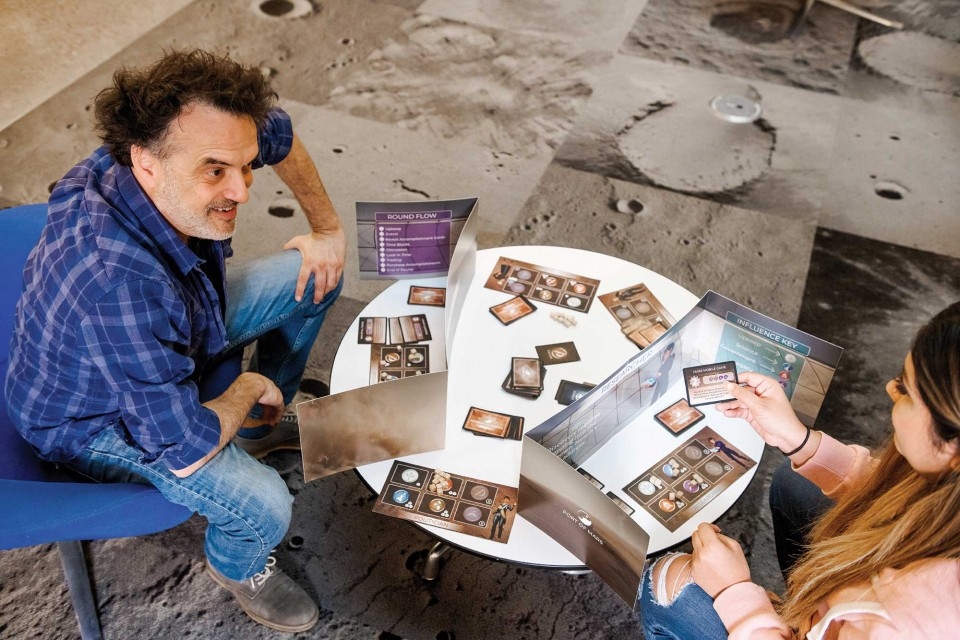 Lance Gharavi (left) playing the analog version of Port of Mars on the "Crater Carpet" in ISTB4 in 2019. Photo credit: ASU

Dozens of students participated in the spring 2021 Mars Madness tournament. Members of the championship team have won a (socially distanced via Zoom) dinner with former NASA astronaut and ASU Global Explorer in Residence Cady Coleman.

Because the game is an experiment, there are also teams of faculty and students working behind the scenes, analyzing how the game is being played, writing code and testing algorithms.

ASU undergraduates Jessica Noble and Tyler Millis are two of the students working on a coding team for Port of Mars. They have been analyzing and coding data from the tournament for machine learning, with the goal of speeding up and automating some of the coding processes.

Noble, who is a sustainability major, was interested in this project because it offered a unique opportunity to work on a social experiment in a fictional Mars colony.

“The game is truly team-based and it tests players' reactions to scenarios within the game where players are swayed by their own interests versus the interests of the group,” she said.

Millis, who is a sustainability major with a minor in urban planning, found the connections in the game to social and sustainable challenges in real life fascinating.

“It is interesting to see how people react when outcomes are unknown and the need to work together is paramount in achieving success,” he said.

While there was a single team winner for the spring 2021 Mars Madness tournament, the outcome differed dramatically from a tournament that was played in fall 2020, when the championship surprisingly ended in a tie.

A digital dashboard for the Port of Mars game. Winning the game takes a combination of strategy, communication and luck.

Evan Carlson, who is studying mechanical engineering, was one of the students participating in the 2020 tournament who agreed to end last year’s championship in a tie.

Carlson originally signed up for the tournament as an extra credit assignment for an astrophysics class he was taking. After the first round, though, he enjoyed playing it so much he continued on to the second and third rounds just for the fun of it.

“The best part of the game was the trading aspect,” Carlson said. “And the unpredictability of the events that occur every turn added a layer of complexity to the game that made it very enjoyable.”

Winning the game takes a combination of strategy, communication and luck. But toward the end of the fall 2020 championship, five of the players put faith in each other so they could all succeed.

“At any moment, any one of us could have thrown the rest of the group under the bus and been the lone winner,” Carlson said. “But we agreed to end the game in a tie and each one of us had the selflessness to do it. I think it showed me that, even if it was just a game, people are still capable of helping others even at their own expense, or even if they don't get some sort of prize just for being decent.”

Gabriela Roig, an exploration systems design major who also participated in the fall 2020 championship game, became interested when she read about the concept of the game.

“Having strangers work together to survive day to day life on Mars sounded like a lot of fun, and learning about how we could colonize other planets is something that has always been interesting to me,” she said.

Promotional image for Port of Mars by Brunella Provvidente for the Interplanetary Initiative.

Her favorite part of the game was the final round, when they were all working toward getting as many points possible for themselves so they could win, and then it was suggested that the game could end in a tie.

“We didn’t even know if the game was set up for that to happen but it seemed like a fun challenge to give ourselves,” she explained. “We all worked together, giving any resource necessary to achieve our goal, and making concessions for the better of the whole team.”

“In the end, the November 2020 championship players modeled civic cooperation, honesty, public-mindedness, and care for the common good over individual self-interest,” Gharavi said.

Earlier this year, the National Science Foundation awarded funding to Gharavi and his team to augment Port of Mars. They plan to use the funding to scale up their work, to make their systems more robust with larger sample sizes, to build machine-learning tools to help analyze data and to take the experiments beyond ASU into other communities.

“Like a lot research in space exploration, the research we’re doing will be useful here on Earth,” Gharavi said. “For instance, combating COVID-19 presents a host of difficulties like the ones we’re investigating. With every game we play, the Port of Mars team is searching for ways to effectively meet such challenges, on Earth and in space, now and in the future. With Port of Mars we’re not just thinking about the future. We’re rehearsing for it.”