Despite fewer people on campus, students in Pastor Center programs registered large numbers of voters in 2020

ASU students overcame the physical challenges of reduced on-campus traffic in 2020 to register large numbers of fellow students to vote and organize other successful voter engagement programs administered by the Congressman Ed Pastor Center for Politics and Public Policy.

A variety of voter engagement activities in 2020 contributed to an upward trend in ASU student voting that’s been ongoing since 2014, said Alberto Olivas, director of the center, which is based at the Watts College of Public Service and Community Solutions. 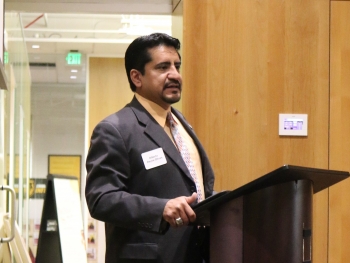 Voter education and engagement strategies are highly effective at increasing community and civic participation overall. Community and participation comprise two of the five core aspirations of the Watts College.

This past fall, a team of students organized by the center registered nearly 1,600 students to vote between the start of the fall semester and election day in November, Olivas said.

“The student civic coalition members were incredibly focused on aligning efforts toward student voter advocacy and civic engagement. They got all these leaders together and coordinated their campaigns rather than competing with each other’s events and programs,” Olivas said.

The coalition partnered with University Housing to train community support assistants (CSAs) to register students in on-campus housing to vote, either in Arizona or their home states, using a platform called TurboVote.

The coalition also partnered with Sun Devil Athletics to engage student-athletes to sign up so they could inspire other students to also register. Goodman Ambassador Olivia Miller, a member of the Sun Devil softball team, led that drive, incorporating help from athletics staff. Their efforts resulted in more than 400 athletes registered, Olivas said.

The office of Arizona Secretary of State Katie Hobbs, who is a Watts College graduate with a master’s degree in social work, organized a voter outreach committee that invited two of ASU’s Goodman Ambassadors to serve. Hobbs’ office and the offices of the state’s 15 county recorders worked to produce presentations and answered questions from prospective voters.

Olivas said the committee focused on identifying and addressing barriers students face in registering to vote and casting their ballots.

The ambassadors and the Civic Engagement Coalition were featured in the initial issue of Public Service Review, a national journal on public service projects, particularly those conducted by young people.

Olivas said students’ diligent work to get out the vote among their peers has contributed to substantial increases in the numbers of students voting, which rose steadily between 2014 and 2018, according to statistics compiled by Tufts University in Massachusetts. Statistics from 2020 won’t be available for several more months, Olivas said.

The Pastor Center also used grant funding to conduct voter outreach targeting young people ages 16 to 25 who are neither working nor enrolled in school, known as “opportunity youth,” working with a Watts College-based organization called Opportunity for Youth (OFY). Outreach workers spent five months, from June to November, educating such youths about how elections work, who runs them and who are stakeholders in elections.

Their efforts got voter engagement messages to more than 33,000 such young people across the Valley, Olivas said. Twelve ambassadors directly contacted more than 9,600 young and first-time voters, he said.

“We trained and coached the youth voter outreach workers as they came up with their own strategies and plans to inform and recruit voters among opportunity youth,” Olivas said.

The year 2020 was tumultuous in many ways, Olivas said, and yet there are many accomplishments to be proud of.

“We have a lot to celebrate about related to the political engagement of young people and efforts to increase student voter registration and student voter turnout,” Olivas said. “As someone that has worked in the field of youth voter engagement for over 20 years, I can honestly say I have never before seen young people demonstrate this level of passion, activism and organizing centered around last year’s state and national elections.”

Last fall, the Music Library at Arizona State University began working on a new research tool for students and faculty interested in exploring an area of study largely undiscovered — important Black female composers and their compositions, dating from the 1930s to present day.Now online and poised for growth, the Black Women Composers Project points to the ASU Library’s growing collection of...

Last fall, the Music Library at Arizona State University began working on a new research tool for students and faculty interested in exploring an area of study largely undiscovered — important Black female composers and their compositions, dating from the 1930s to present day.

Now online and poised for growth, the Black Women Composers Project points to the ASU Library’s growing collection of over 160 newly available scores, including symphonies, operas, choral works, vocal music and chamber music, and features biographies, compositions and sound recordings belonging to 15 significant composers in the 20th and 21st centuries. “The Black Women Composers Project is illustrative of our strategic initiative to prioritize the preservation and digitization of resources that elevate the voices of communities that have been underrepresented in libraries and archives. Increasing access to these rare materials and diverse collections is a great way for the library to contribute to realizing ASU’s charter,” said Lorrie McAllister, associate university librarian of collections and analysis at the ASU Library.

To discuss some of the extraordinary women represented in the Black Women Composers Project, ASU News spoke to Christopher Mehrens, associate librarian, who is overseeing the project. While many of the new scores in the collection are still being processed, Mehrens says his hope for the project is that it will shine a light on this rich music history and make it accessible for all.

Question: Among the earliest represented composers in the project is Florence B. Price (1887-1953), the first African American woman to have a symphony premiered by a major symphony orchestra. Can you tell us more about her?

Answer: Price led a remarkable life. She was born in Little Rock, Arkansas, and initially studied music with her mother. Such was her talent, she was admitted to the New England Conservatory of Music in Boston, where she studied organ with Wallace Goodrich and composition with two of the foremost American composers and teachers of the period, Frederick Shepard Converse (1871-1940) and George Whitefield Chadwick (1854-1931). Upon graduation, she returned to the south to teach, eventually becoming head of the music department at Clark College in Atlanta.

According to Price scholar Rae Linda Brown, because of increasing racial oppression, she and her family moved to Chicago. It was in Chicago that she emerged as a significant American composer and educator. In 1932 she won the Wanamaker prize for her First Symphony, which was performed by the Chicago Symphony in 1933. It was this performance that made her the first Black woman composer to be performed by a major symphony orchestra. When the great contralto Marian Anderson performed Price’s setting of Langston Hughes’ poem “Song to the Dark Virgin,” her song was hailed by critics as being one of the greatest accomplishments by an American composer. Until her death, Price remained one of this country’s most important composers and teachers.

Q: Another early composer featured in the project is Margaret Bonds, the virtuoso concert pianist, who studied with Price and collaborated with Langston Hughes. Can you give us more of her history?

A: Margaret Bonds (1913-1972) was born in Los Angeles, California, was taught music from an early age by her mother and, as a teen, studied piano and composition with Florence B. Price. She attended Northwestern University, where she was awarded Bachelor of Music and Master of Music degrees before being admitted to the Juilliard School in New York City, where she studied piano and composition. In 1932, the same year that Florence B. Price won the Wanamaker prize for her symphony, Bonds won the Wanamaker for her song "Sea Ghost." As a virtuoso concert pianist, in 1933, she premiered Price’s piano concerto with the Chicago Symphony, becoming the first Black woman to solo with that renowned orchestra.

Bonds collaborated with the great poet Langston Hughes and set many of his poems to music. She returned to Los Angeles and remained active in the music community. Her last major composition, "Credo," based on the opening of W.E.B. Du Bois’ 1921 book “Darkwater: Voices from Within the Veil" was performed a month after her death by the Los Angeles Philharmonic.

Q: Who are some of the other important composers the project is spotlighting?

A: Valerie Capers, the first blind person to graduate from Juilliard, who was commissioned by the National Endowment for the Arts to compose an “operatorio” on the life of Sojourner Truth. Rachel Eubanks, who studied at the American Conservatory of Music in France with the legendary composer and teacher Nadia Boulanger (teacher of Aaron Copland). There is also Tania León, who was born in Cuba, studied at NYU and served as a pianist, conductor and composer at the Dance Theatre of Harlem. She was also involved as a music director in such Broadway productions as “The Wiz” and “Godspell.” And there’s Jessie Montgomery, who is the recipient of the Leonard Bernstein Award from the American Society of Composers, Authors, and Publishers (ASCAP) and is a major up-and-coming composer.

To learn more about the Black Women Composers Project, visit the library guide or contact Christopher Mehrens at christopher.mehrens@asu.edu.