Despite Alonzo Verge Jr. posting a season high in scoring for the second time in as many days, the Sun Devil men's basketball team (No. 8 seed) was not able to extend its season, falling to the top seed Oregon 91-73 in the quarterfinal round of the Pac-12 Tournament.

Greek life means a lot to the thousands of Arizona State University students who participate in it every year. But to ASU alumni Steve LeVine and Jamie Morris LeVine, their fraternity and sorority experience was instrumental not only in their connection but in their careers.Steve, who is from Los Angeles, graduated from ASU in 1999 with a bachelor's degree in mass communication. After moving into ...

Football Off to Coliseum in Tilt against #6/6 USC

Last Of Five-Straight Road Trips This Weekend At No. 16 Oregon, OSU

Greek life means a lot to the thousands of Arizona State University students who participate in it every year. But to ASU alumni Steve LeVine and Jamie Morris LeVine, their fraternity and sorority experience was instrumental not only in their connection but in their careers.

Steve, who is from Los Angeles, graduated from ASU in 1999 with a bachelor's degree in mass communication. After moving into Sonora, he decided to join Theta Chi after seeing how much the chapter took care of each other. 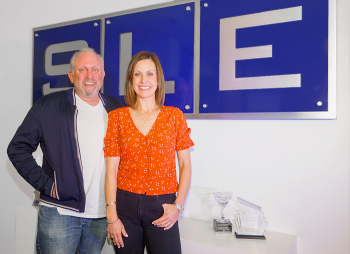 Theta Chi gave Steve opportunities that would end up preparing him for a career in entertainment. Steve shared his interest in DJing, and Theta Chi gave him a platform to start DJing at fraternity and sorority socials and events through the rest of his college career and beyond.

Steve brought other Greek life participants into the fold of his entrepreneurial endeavors as well. He and his brothers began to reshape the bond between other fraternities and sororities to encourage more all-Greek socializing. He started popular Greek Nights at local venues.

“Next thing you know we were doing 10-way socials,” Steve said. “My Greek experience was incredible.”

Steve and Jamie met in 1998 and also bonded over Greek life; Jamie was in Alpha Chi Omega and studied communication, graduating in 2001. Being a second-generation Sun Devil, Jamie knew that her experience at ASU would be one to look back on. Steve and Jamie have three kids, ages 12, 8 and 5. The family keeps Sun Devil spirit alive in the next generation as well: They never miss a Territorial Cup.

“My dad went to ASU and was like, ‘That is the only college you are going to,’” Jamie said. “I always tell my kids if I could do any part of life again it would be going back to ASU.”

After growing up in Tempe, Jamie was looking forward to new relationships and experiences in college. This led her toward the Greek life system and Alpha Chi Omega.

“Being from here I felt like I wanted to do something different,” Jamie said. “I had all my high school friends, but I wanted to create these new relationships and create new friends. That is really why I went through rush.”

Luckily Jamie’s intuition was right: She says Alpha Chi Omega was and is one of the best experiences of her life.

“It was awesome,” Jamie said. “I just met the most amazing women. Because of the sorority, I have my best friends in the whole world. It was such a positive experience for me.”

After graduation, Steve began his professional career with the help of his network at ASU and Theta Chi. From DJing to party planning and marketing, Steve realized where his skills could take him.

“I had so many jobs and so many different internships (in college),” Steve said. “I felt like having that knowledge always helped me get another job but eventually made me become the entrepreneur that I am.”

The staff leads events such as Scottsdale Fashion Week, the Ostrich Festival and the Soundwave Music Festival. As their business grew, they always kept in mind how valuable their student work experiences were, so they made sure to create a lot of internships and jobs for Sun Devils who wanted experience in entertainment and marketing.

“I always want to give an opportunity to other students, first ASU but always one extra bonus if they were in the Greek system,” Steve said. “We always love giving back and creating these opportunities for people and even if we didn’t need all the extra employees, it was just nice to have them and give them cool experiences.”

Steve LeVine Entertainment made its mark in in-person events. However, in March 2020, their operations were forced to evolve into a new form of entertainment due to COVID-19.

“COVID has affected all of us. We got hit really hard,” LeVine said. “We produced the Ostrich Festival, 100,000 people, and we were set to break records last year. Then we got to the day the national emergency was declared by the president. We had to shut everything down. We had everything on the line.”

COVID-19 caused nearly every business to reshape operations, and Steve LeVine Entertainment was no exception. The guidelines continued to tighten, and in-person events were put on pause. Nearly their entire calendar for the following year was erased. But the business adapted. Steve and his team created virtual events and drive-in movies to support their community during this unprecedented time.

“We don’t want to add to problems. We want to be the solution, but we do know that going out, listening to music, entertainment and sports is all about mental health. Whether people want to say so or not, we need it. Our kids need it,” Steve said.

Thankfully, Steve and Jamie are confident that Steve LeVine Entertainment will return in full swing in the coming year. Events that follow CDC guidelines have been placed on the calendar, and the business is ready to bring in-person entertainment back to Arizona as safely and quickly as possible.

“We are a very happy family, and we are excited to see what is next. We are just antsy to see us get there,” Steve said. “It is just nice that we can see the light at the end of the tunnel.”