In her novels, award-winning author and Arizona State University Professor Jewell Parker Rhodes often combines her firsthand experiences with historical events and a bit of imagination to create fictional worlds readers can both relate to and learn from.

“Black Brother, Black Brother,” Rhodes’ latest children’s novel, follows that same formula — exploring her interest in the history of fencing, her experiences as a mother of biracial children and her passion for social justice. Since its release nearly one year ago, the story has won numerous awards and most recently was nominated for an NAACP Image Award for outstanding literary work. 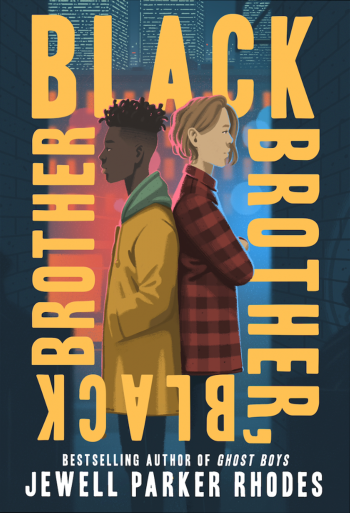 As the founding artistic director of ASU’s Virginia G. Piper Center for Creative Writing, Rhodes has written 15 novels for children and adults on topics ranging from social justice, equality and environmental stewardship. “Black Brother, Black Brother” highlights colorismA form of prejudice or discrimination in which people who are usually members of the same race are treated differently based on the social implications that come with the cultural meanings that are attached to skin color. and racial bias in the school system through the story of two brothers: Trey, who presents as white and Donte, who presents as Black.

Because of his skin color, Donte is taunted by his peers at school and bullied by the captain of the fencing team. Throughout the course of the story, Donte uses sport to become a fencing champion, to assert his sense of identity and to beat the bully at his own game.

“Though Donte is able to dispel stereotypes and prejudices, when he comes to the end of the book, it’s more about how he’s embraced his own identity with self-love,” Rhodes said. “The idea is that if people have bias or prejudice against you, the problem is in their heart. It really is a shoutout to the codes of fencing and the codes of being great human beings — integrity, honor, fairness, respect, self-confidence, self-esteem and self-love.”

Rhodes said it’s rare for youth to have a book that creates a safe space for them to discuss topics like colorism and identity, but with “Black Brother, Black Brother,” young readers have that opportunity to celebrate and explore their own identities.

“Youth love ‘Black Brother, Black Brother.’ They love it as a sports book, as a triumphant tale of the underdog, a call for social equity in schools and as a celebration of everyone's unique ethnic heritage. Biracial children especially love the representation,” she said.

Rhodes shared her thoughts on the NAACP Image Award nomination, her inspiration behind “Black Brother, Black Brother” and more.

Also ever since I was a child I’ve loved swords and the idea of fencing. I just adored “The Three Musketeers.” When I was 25 years old I saw in Smithsonian Magazine that the author of “The Three Musketeers,” Alexandre Dumas, was a biracial man. I found out later through Tim Reiss’s book “The Black Count: Glory, Revolution, Betrayal, and the Real Count of Monte Cristo” that Dumas was actually writing about his dad who was a great fencer and was a general in Napoleon's army. This was a revelation to me that one of the most famous writers in America had been a person of color and that he was writing about his father.

In “Black Brother, Black Brother” it worked out perfectly that I could marry social justice and the colorism that prevented kids of color from knowing about the history of fencing while also tying in that sense of undermining that fencing has just been an aristocratic, white sport, particularly in America. 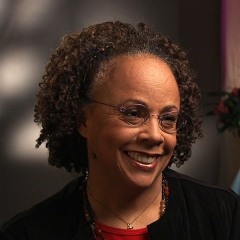 A: My books will have long gestation periods. “Black Brother, Black Brother” took me about two years. I dream, I have nightmares, I think about it. But I can't write, not unless I hear the character's voice. So when Donte starts out the novel without hearing his voice, I can't tell his story because I don't plot, I have to feel my way through the character. When my characters break down and cry, that's because I'm crying. When they're joyous, I feel that joy ... It's like a stew, all these elements just come together in my mind and my experience. Every time I finish a book, I say, “I'm never writing another one!” Because they take on average two to seven years to write — even my youth books which are so small take a long, long time. It's a marathon. But after about two or three months of not writing, I get grumpy.

Q: How does it feel to be nominated for an NAACP Image Award?

A: The NAACP, proudly and fiercely, advocates and represents the Black community. As a child growing up in a segregated, poor community, they were fighting to make a more equitable future for me. Because of lack of representation of Black writers and Black characters in books, I almost lost my vision to be a writer in the world. To be nominated for a NAACP Image Award, to know my community believes I am representing well our heritage and culture, fulfills my lifelong artistic dream.

A: That none of us are just one genetic thing, we all know we’re descendants from Lucy. We all have a great mixed-race heritage. When I was growing up, my grandmother said, “Jewell child, there's nobody in the world better than you. And you're no better than anybody else. We're all a mixed blood stew.” That was essential for how I grew up and how I live my life. If everyone could accept that we have all kinds of mixed-race bloodlines, it emphasizes our common humanity and the inclusivity. Color is no more than a superficial difference. This book celebrates the uniqueness of the individual, as well as the common humanity of all people. There are a lot of people who have mixed heritage or come from biracial families. In the book, I think they will find themselves mirrored in their most essential sense. It's not your skin tone that matters, it's your interior self — your heart, your mind, your spirit — that makes you like any other wondrous human being.

In an age when colleges are struggling to meet enrollment goals and the public continues to question the value of higher education, Arizona State University's School of Molecular Sciences academic advisers are excelling and helping a record number of students.Today, perhaps more than ever before, academic advisers are doing everything in their power to assist students.In the past year, School of ...

In an age when colleges are struggling to meet enrollment goals and the public continues to question the value of higher education, Arizona State University's School of Molecular Sciences academic advisers are excelling and helping a record number of students.

Today, perhaps more than ever before, academic advisers are doing everything in their power to assist students. 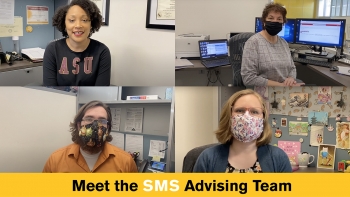 In the past year, School of Molecular Science advisers have handled 3,217 appointments, both in person and virtual, plus an additional 289 walk-in students. They have also had 8,000 SalesforceSalesforce is a software that provides customer relationship management service. cases; Mary Ann Bucciarelli, School of Molecular Science student support specialist senior, is a power user and processed 75% of them.

“I’m a firm believer that retention is based on student connections,” said Orenda Griffin, assistant director of academic services in the school. “When advisers build rapport with students and they feel supported they will come to you with challenges they face throughout their academic journey. This allows us to give meaningful advice and make the appropriate referrals. As the saying goes, 'It takes a village.' In this instance it takes a collective effort across the university. Many times this starts with advisers who truly care.”

Jesús Villa and Sarah Johnson, both academic success specialists, and Griffin and Bucciarelli all feel that during these unprecedented times students need support, encouragement and clarification more than ever. The school's advising team provides all of that to students in multiple ways.

Johnson had the inauspicious task of beginning her position in the school in March 2020 when learning was mostly remote.

“I have seen lots of student success even in my short time at ASU," Johnson said. "It is hard to pick one, but I do see many students working through their programs while working at their current jobs and being a parent. Each semester is a success story as they move forward towards their degree.”

“I feel like the main thing that makes students feel at home at ASU and wanting to stay, is building a friendly, personable relationship with the student so that they feel like an individual instead of a number in a huge university,” Villa said. “My ASU undergraduate adviser excelled at making me and his other students feel seen and heard, and it definitely made me want to stay in the program and keep coming back, so I try to emulate his example as much as possible.”

Griffin earned a Bachelor of Science in business administration from California State University Los Angeles, and later earned a master's degree in business administration. As the assistant director of academic services in the School of Molecular Sciences, she is able to help students persist academically, discover their potential and achieve their goals. She is committed to student success and improving retention while not compromising the student experience. She consistently collaborates with faculty and staff to accomplish this.

Johnson, an Arizonan native, has had a passion for supporting students since her undergraduate career. While earning a Bachelor of Science in psychology, and during her studies for a Master of Arts in school counseling, Johnson continually sought opportunities to help students achieve their academic goals. Now she is excited to be supporting the students of the School of Molecular Sciences to achieve these goals too.

Originally from New Mexico, Villa began his undergraduate career at Arizona State University in 2007. He graduated in 2011 with a bachelor's degree in anthropology and a minor in religious studies. He worked for two years as a forensic death investigator and forensic anthropology lab assistant for the Maricopa County Office of the Medial Examiner before returning to ASU in 2013 to pursue his master’s degree. He graduated in 2016 with an Master of Arts in anthropology of religion; his thesis, "African Healing in Mexican Curanderismo," focuses on the West African ritual and ethnomedical contributions to curanderismo, the traditional healing art of Mexico and the Southwestern United States.

Bucciarelli began working for the School of Molecular Sciences in July 2012 as an office specialist senior and in August 2014 was promoted to an office supervisor. She moved to the student support specialist senior position in March 2016. She has a history of working in a secondary educational setting in many different capacities for the last 20 years. She enjoys working with students, faculty and staff, organizing events, and learning new information and challenges.

School of Molecular Sciences bachelor's degree programs train students to be successful in a wide variety of careers including scientific research; health professions such as doctors, dentists and pharmacists; teaching; forensics; regulation; and policy. Students also develop life skills such as communication in speech, writing and teamwork. The school has a history of mentoring award-winning undergraduate students.

The School of Molecular Sciences also offers opportunities for students to get involved in transdisciplinary research and learn how molecular science can address contemporary societally relevant problems.