For decades, space and ground telescopes have provided us with spectacular images of galaxies. These building blocks of the universe usually contain several million to over a trillion stars and can range in size from a few thousand to several hundred thousand light-years across. What we typically see in an image of a galaxy are the stars, gas and dust that constitute these sprawling systems.

But there is a hidden component of galaxies that does not emit enough visible light for us to see. This component, a gas that holds clues to how galaxies grow in size over time, is the subject of a recent study by a team of researchers including Christopher Dupuis, Assistant Professor Sanchayeeta Borthakur, Mansi Padave and Rolf Jansen of the School of Earth and Space Exploration with Rachael Alexandroff of the University of Toronto and Timothy Heckman of Johns Hopkins University. The results of their study have been recently published in the Astrophysical Journal. 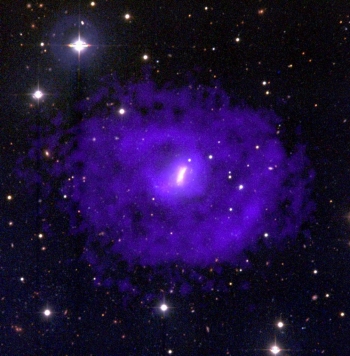 Dwarf galaxy UGC 5288 (seen here in pink) is 16 million light-years from Earth. It is surrounded by a huge disk of hydrogen gas (purple) that has not been involved in the galaxy’s star-formation processes and may be primordial material left over from the galaxy’s formation. Credit: B. Saxton from data provided by Van Zee, NOAO, NRAO/AUI/NSF Download Full Image

The gas the team studied is located in the extended disk of galaxies, an area called the “circumgalactic medium,” a large halo around every galaxy that is under its gravitational influence. Galaxies similar to the Milky Way have stellar disks as large as 200,000 light-years across with extended disks that can be over twice that size.

“Extended disks play an important role in how galaxies grow,” explained lead author and graduate student Dupuis. “As the gas travels from the circumgalactic medium into the extended disk, it will eventually be turned into new stars.”

Since this gas does not emit enough visible light for us to see it, detecting it outside of galaxies is difficult. Scientists have traditionally used a bright object, called a quasar, located behind the galaxy being studied. They measure the light of the quasar and then determine how much of it is “lost” (absorbed) due to the gas that is around the galaxy.

In this study, however, the team employed a relatively new technique. Using data from the Hubble Space Telescope and the MMT Observatory, they analyzed the light from a background galaxy (rather than a quasar) to obtain the measurements. This allowed them to make a size estimate for the gas cloud.

“While we believed that most galaxies in the past should have large gas disks that eventually formed stars like the sun, there was little observational confirmation,” added co-author Borthakur. “This result solidifies our understanding of what fueled the stars that we find today, including our sun.” 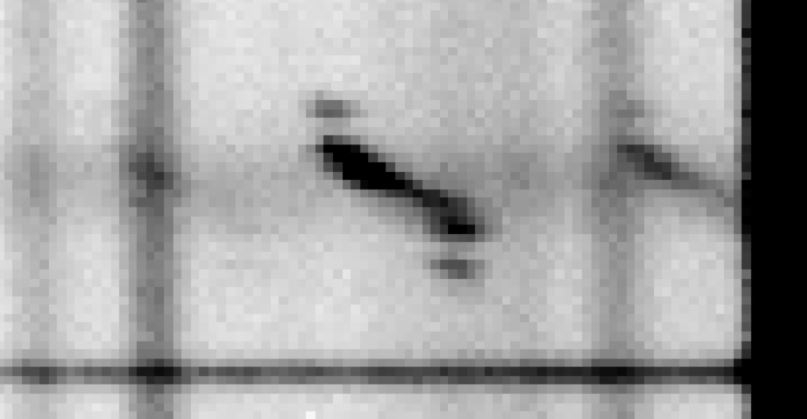 This figure shows a two-dimensional spectrum of the gas cloud host galaxy that the team obtained with the MMT Observatory. This portion of the spectrum is what they used to measure how the stars in the galaxy are rotating. Knowing how the stars move allowed the team to confirm the gas they measured using the Hubble data was part of the extended disk of the galaxy. Credit: Dupuis et al./MMT

The research team hopes that future projects will be able to use this new technique to study large numbers of galaxies once the construction of next-generation, ground-based telescopes is complete later this decade. Telescopes like the Giant Magellan Telescope (GMT), of which ASU is a partner, will be able to collect data on dozens of different systems similar to ours, and subsequent studies of extended disks and their properties will aid in our understanding of galaxy growth.

“Using galaxies as background sources will revolutionize our understanding of the large gas reservoirs around galaxies critical for star formation,” said Borthakur. “With a powerful telescope like the GMT, we will be able to get many more lines of sight to map these hidden structures by using plentiful, faint background galaxies rather than just the rare bright quasars as the light sources.”