A graduate student at Arizona State University has teamed up with airmen from Luke Air Force Base to develop a 3D augmented reality system that could revolutionize the way U.S. Air Force pilots train for combat. The team has emerged as a top five finalist among more than 300 entries in an annual Air Force innovation challenge known as Spark Tank.

In the final round of the competition, the team will pitch their idea, called “Next-Gen Debrief,” to top U.S. Air Force leadership and a panel of industry experts at the virtual Air Force Association Aerospace Warfare Symposium on Feb. 26. The winner will be chosen by popular vote from thousands of virtual symposium attendees. 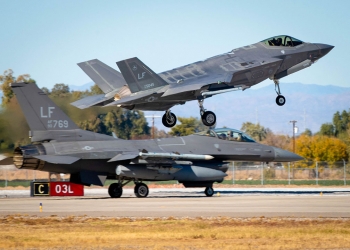 The system could revolutionize postflight debriefs at Luke Air Force Base, located west of Phoenix, which trains more fighter pilots for the U.S. and allied operations than any other air base in the world. Its 56th Fighter Wing graduates more than 400 pilots and 300 air control professionals each year. 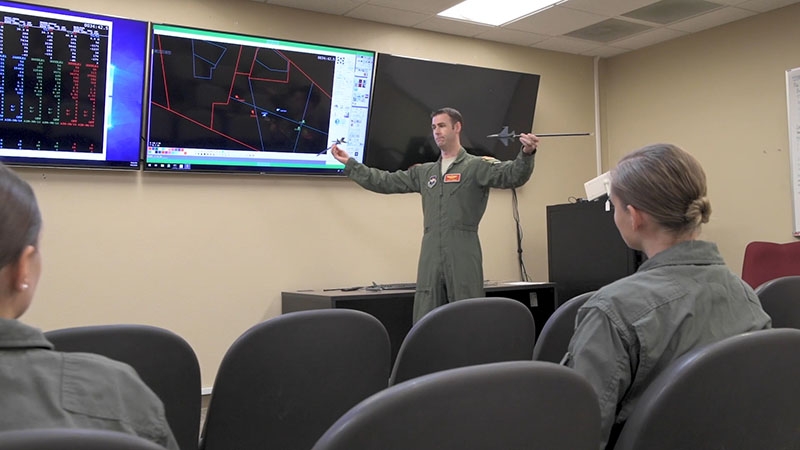 “The debrief process is fundamental to how we train to fly,” Hawkins said. He is one of three airmen on the Luke Air Force Base team, including Lt. Col. Alexander Turner, 56th Operations Support Squadron director of operations; and 1st Lt. Adam Treece, 56th OSS intelligence readiness chief. Through the National Security Innovation Network (NSIN) X-Force program, the airmen teamed up with Dylan Kerr, a student earning a master’s degree in digital culture (art) in ASU’s School of Arts, Media and Engineering. Kerr is also part of ASU’s Luminosity Lab, a student-driven, interdisciplinary research and development lab.

Here’s how Next-Gen Debrief works. Using Unity 3D’s real-time game development platform, Kerr developed an application that uses aircraft Air Combat Maneuvering Instrumentation data to create immersive and interactive flight animations — a radically new perspective for mission participants. He also built the application for the Microsoft HoloLens2 mixed-reality headsets to project the three-dimensional scene into the debriefing room, allowing participants to view scenarios from any angle during instructors’ postflight meetings with student pilots. The scene can be shared with multiple participants in the same room or with pilots on different Air Force bases to view and discuss missions together.

“Right now, if I want to debrief with someone who flew a mission from a different base we'd have to do that over the telephone,” Treece said. “But imagine if you put these headsets on and could debrief virtually, and both of you could see the same thing at the same time. That would make it a much more efficient process.”

“The project definitely changes my perspective on what’s possible with augmented or virtual reality,” Kerr said. “A lot of times we look at these tools as just something for entertainment. But what’s so special about Next-Gen Debrief is how much more effectively airmen can visualize their flight trainings.” If Next-Gen Debrief emerges as a Spark Tank winner, the team will receive project management support and other resources to implement their idea at Luke Air Force Base, which Hawkins predicts could be accomplished within six months. The goal is to then grow the capability throughout Air Force installations across the country.

Last year, a team of Luke Air Force Base airmen and ASU engineering researchers tied for first place in the Spark Tank challenge. Their winning device, the Dynamic Unmanned Threat Emitter (DUMTE), is now used to train pilots to identify and respond to threat environments like surface-to-air missiles and anti-aircraft artillery. A threat emitter is a training system that has the ability to realistically mimic threatening emissions from an array of potential enemy air systems.

As a result of NSIN, a program office under the Office of the Secretary of Defense, Research and Engineering, ASU’s partnership with the U.S. Department of Defense continues to grow to rapidly innovate new solutions to problems that require minds from many disciplines. In addition to competing in the Air Force Spark Tank competition, ASU received direct funding from NSIN to further develop the software system.

"The NSIN partnership with ASU continues to strengthen our national security ecosystem in Phoenix and across Arizona," says Samantha Hiller, NSIN ASU program director. "Next-Gen Debrief is one of several projects that shows precisely why NSIN established a strategic partnership with ASU. As the success of this project shows, ASU has a unique capability to provide leading technology to solve tough DOD problems."

"The DOD wants to acquire new technologies and innovate quickly, and we can serve them as the most innovative school in the United States," says Drew Trojanowski, assistant vice president of strategic initiatives at Knowledge Enterprise. "We have a huge opportunity to match underleveraged talent and leading technology to defense needs, which allows us to create high-wage and high-growth jobs right here in Arizona.”

An Arizona State University alumna has been on a decades-long mission to provide housing for people with autism, and her collaboration with ASU on a new research report will make it easier to address the crisis.Denise Resnik, founder and CEO of the First Place AZ nonprofit, teamed up with the Morrison Institute for Public Policy at ASU on the recently released study, “A Place in the World: Fueli... An Arizona State University alumna has been on a decades-long mission to provide housing for people with autism, and her collaboration with ASU on a new research report will make it easier to address the crisis.

Denise Resnik, founder and CEO of the First Place AZ nonprofit, teamed up with the Morrison Institute for Public Policy at ASU on the recently released study, “A Place in the World: Fueling Housing and Community Options for Adults with Autism and Other Neurodiversities.”

The report seeks to establish a common language for all the stakeholders involved in creating housing for people with autism – families, investors, real estate developers, nonprofit and philanthropic groups, government agencies and decision-makers. A universal terminology will make it easier to collect data and create policies.

Resnik has worked on this issue since her son was diagnosed with autism in 1993, and she saw her work come to fruition with the 2018 opening of First Place, a residential community in Phoenix for adults with autism.

Nationwide and in Arizona, there is a severe shortage of housing for adults with autism and intellectual and developmental disabilities, and “A Place in the World” lays out the obstacles.

“This incredible body of work came about following what has been a challenging journey of trying to help express what our son needs and what other people need in terms that a marketplace can understand,” said Resnik, who was an editor and publisher of the study.

The need is great. The report points out:

Resnik has a deep background in housing development. She graduated from ASU in 1982 with a degree in business administration, and her first job was with the Del Webb Corp., which pioneered the concept of retirement communities. In 1986, she started her own marketing company, DRA Collective, focused on real estate and community development.

When her son, Matt, was diagnosed with autism at age 2, the family was told “to love, accept and plan to institutionalize him.” So they visited institutions.

“I remember what I saw and how they smelled and I ran away as fast as I could. I became committed to finding a better way.”

In 1997, she co-founded the Southwest Autism Research and Resource Center, a nonprofit dedicated to supporting people with autism throughout their lifetimes.

“I knew that would lead us to residential housing, and I tried to get there right away,” she said. But the journey ended up taking many years. The real estate industry and government policy are complex. In 2012, she launched First Place AZ, a nonprofit to work on housing, which is separate from SAARC, which focuses on advocacy and research.

Resnik compares the evolution of housing for retired people, which has expanded from a focus on golf to including a wide range of options, to the need for housing for people with neurodiversities.

“We need to realize there is not a ‘one-size-fits-all.’ We need a mature marketplace,” she said, with choices in types of housing and levels of support.

For that to happen, all sectors must work together – public, private, philanthropic and nonprofit – and that requires a common language, she said.

The report also points out obstacles to a healthy housing market. For example, there is no federal landmark housing policy for this population. In addition, Medicaid funding restrictions make it difficult for people who need support to afford housing, according to two policy briefs in the report written by Pooja Paode, who earned bachelor’s and master’s degrees at ASU. She was a Daniel Jordan Fiddle Foundation Adult Autism Public Policy Fellow and graduate research assistant at the Morrison Institute when she participated in the report.

Public policy is driven by data that shows the depth of a problem, but that data is nearly impossible to come by because of the lack of a universal nomenclature, Resnick said. Existing data sets can’t be linked because no one knows exactly what is being measured.

“We need to be able to go to policymakers with actual data and experiences,” she said.

Resnik said that housing for elderly people often follows a progression in intensity from independent living to semi-skilled to nursing. For young adults with autism, the progression might be reversed.

“We need more intensive support early in their adult lives after leaving high school,” she said.

“In the past few decades we’ve made tremendous advances in early identification, early intervention and early education.

“But after they leave high school at the age of 22, they’re faced with a scarcity or disjointed services, and they slide backward. So few resources have been focused on the adults.”

The report includes examples of innovative supportive housing communities, including First Place, in central Phoenix. Residents there have the opportunity to participate in the First Place Transition Academy, a two-year program run by the Southwest Autism Research and Resource Center that builds independent living and career skills. The residents also have community activities and other supports, including vocational skills building and a culinary teaching kitchen.

First Place also is home to the First Place Leadership Institute, a hands-on training center for professionals, educators, support staff and medical personnel. The center offers a fellowship in which doctoral students in the Watts School of Public Policy and Community Solutions at ASU can conduct research while living and participating in the community.

The “Call to Action” portion of the report was written by Resnik and Desiree Kameka Galloway, director of the Autism Housing Network. Among the actions they urge are:

After Resnik’s son, Matt, moved into First Place, a blog on the website followed his victories and challenges as he learned how to do his laundry, keep track of his apartment key and host dinner parties for friends.

“A Place in the World” takes a respectful approach on what autism is and isn’t, Resnick said.

“It reinforces my personal belief that a diagnosis need not stand in in the way of an individual’s opportunity to have a friend, a job, a home and a community that is important to them.”

Top image: Denise Resnik, founder and CEO of the First Place AZ nonprofit organization, stands in front of First Place, the residential community for adults with autism that opened in 2018. The residents, including Resnik's son, get supports including life and career skills building. Photo by Charlie Leight/ASU Now