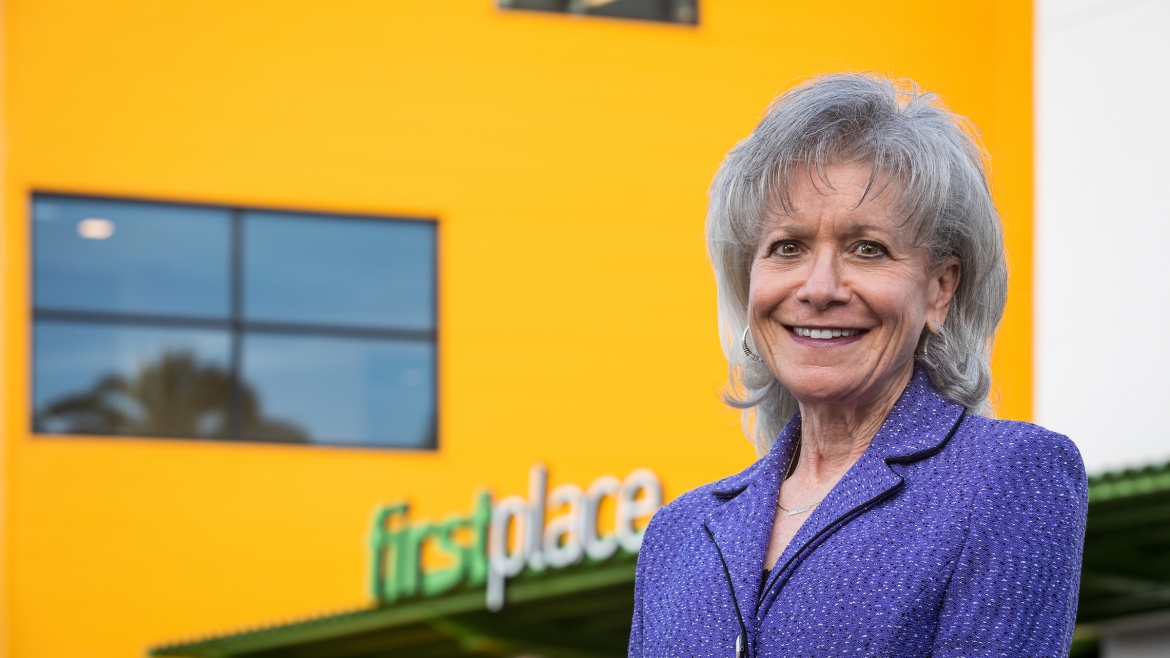 An Arizona State University alumna has been on a decades-long mission to provide housing for people with autism, and her collaboration with ASU on a new research report will make it easier to address the crisis.

Denise Resnik, founder and CEO of the First Place AZ nonprofit, teamed up with the Morrison Institute for Public Policy at ASU on the recently released study, “A Place in the World: Fueling Housing and Community Options for Adults with Autism and Other Neurodiversities.”

The report seeks to establish a common language for all the stakeholders involved in creating housing for people with autism – families, investors, real estate developers, nonprofit and philanthropic groups, government agencies and decision-makers. A universal terminology will make it easier to collect data and create policies.

Resnik has worked on this issue since her son was diagnosed with autism in 1993, and she saw her work come to fruition with the 2018 opening of First Place, a residential community in Phoenix for adults with autism.

Nationwide and in Arizona, there is a severe shortage of housing for adults with autism and intellectual and developmental disabilities, and “A Place in the World” lays out the obstacles.

“This incredible body of work came about following what has been a challenging journey of trying to help express what our son needs and what other people need in terms that a marketplace can understand,” said Resnik, who was an editor and publisher of the study.

The need is great. The report points out:

Resnik has a deep background in housing development. She graduated from ASU in 1982 with a degree in business administration, and her first job was with the Del Webb Corp., which pioneered the concept of retirement communities. In 1986, she started her own marketing company, DRA Collective, focused on real estate and community development.

When her son, Matt, was diagnosed with autism at age 2, the family was told “to love, accept and plan to institutionalize him.” So they visited institutions.

“I remember what I saw and how they smelled and I ran away as fast as I could. I became committed to finding a better way.”

In 1997, she co-founded the Southwest Autism Research and Resource Center, a nonprofit dedicated to supporting people with autism throughout their lifetimes.

“I knew that would lead us to residential housing, and I tried to get there right away,” she said. But the journey ended up taking many years. The real estate industry and government policy are complex. In 2012, she launched First Place AZ, a nonprofit to work on housing, which is separate from SAARC, which focuses on advocacy and research.

Resnik compares the evolution of housing for retired people, which has expanded from a focus on golf to including a wide range of options, to the need for housing for people with neurodiversities.

“We need to realize there is not a ‘one-size-fits-all.’ We need a mature marketplace,” she said, with choices in types of housing and levels of support.

For that to happen, all sectors must work together – public, private, philanthropic and nonprofit – and that requires a common language, she said.

The report also points out obstacles to a healthy housing market. For example, there is no federal landmark housing policy for this population. In addition, Medicaid funding restrictions make it difficult for people who need support to afford housing, according to two policy briefs in the report written by Pooja Paode, who earned bachelor’s and master’s degrees at ASU. She was a Daniel Jordan Fiddle Foundation Adult Autism Public Policy Fellow and graduate research assistant at the Morrison Institute when she participated in the report.

Public policy is driven by data that shows the depth of a problem, but that data is nearly impossible to come by because of the lack of a universal nomenclature, Resnick said. Existing data sets can’t be linked because no one knows exactly what is being measured.

“We need to be able to go to policymakers with actual data and experiences,” she said.

Resnik said that housing for elderly people often follows a progression in intensity from independent living to semi-skilled to nursing. For young adults with autism, the progression might be reversed.

“We need more intensive support early in their adult lives after leaving high school,” she said.

“In the past few decades we’ve made tremendous advances in early identification, early intervention and early education.

“But after they leave high school at the age of 22, they’re faced with a scarcity or disjointed services, and they slide backward. So few resources have been focused on the adults.”

The report includes examples of innovative supportive housing communities, including First Place, in central Phoenix. Residents there have the opportunity to participate in the First Place Transition Academy, a two-year program run by the Southwest Autism Research and Resource Center that builds independent living and career skills. The residents also have community activities and other supports, including vocational skills building and a culinary teaching kitchen.

First Place also is home to the First Place Leadership Institute, a hands-on training center for professionals, educators, support staff and medical personnel. The center offers a fellowship in which doctoral students in the Watts School of Public Policy and Community Solutions at ASU can conduct research while living and participating in the community.

The “Call to Action” portion of the report was written by Resnik and Desiree Kameka Galloway, director of the Autism Housing Network. Among the actions they urge are:

After Resnik’s son, Matt, moved into First Place, a blog on the website followed his victories and challenges as he learned how to do his laundry, keep track of his apartment key and host dinner parties for friends.

“A Place in the World” takes a respectful approach on what autism is and isn’t, Resnick said.

“It reinforces my personal belief that a diagnosis need not stand in in the way of an individual’s opportunity to have a friend, a job, a home and a community that is important to them.”

Top image: Denise Resnik, founder and CEO of the First Place AZ nonprofit organization, stands in front of First Place, the residential community for adults with autism that opened in 2018. The residents, including Resnik's son, get supports including life and career skills building. Photo by Charlie Leight/ASU Now

In response to the protests over the death of George Floyd in May 2020, graduate students in the Arizona State University Department of Psychology found themselves asking how they could enact meaningful change in academia.This question spawned the Amplified Voices Graduate Committee, a graduate student-led initiative led by Skye Mendes, Vanesa Perez, Juan Hernandez, Beza Bekele, Rana Ulhman, Felix...

In response to the protests over the death of George Floyd in May 2020, graduate students in the Arizona State University Department of Psychology found themselves asking how they could enact meaningful change in academia. 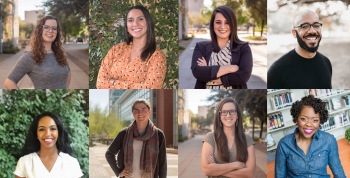 The goal of the Amplified Voices team is to foster an open dialogue about real issues and biases that exist in university environments. The Amplified Voices speaker series highlights topics such as the lived experience of underrepresented academics and ways research and teaching practices can be more equity-minded.

“A big goal that we had in developing this series was to humanize these topics and share these people's lived experiences in the right way. We wanted to put an authentic face and a voice to these topics that are often just talked about in the shadows,” said Vanesa Perez, a fifth-year graduate student in the clinical psychology program.

The project has been funded by programs and individual faculty members within the Department of Psychology and through a Justice, Equity, Diversity, and Inclusion (JEDI) seed grant from The College of Liberal Arts and Sciences.

ASU psychology community members who RSVP for an Amplified Voices talk will be provided with background resources chosen by the speaker. Each presentation also includes calls-to-action, with the goal of actually activating change.

The first speaker for the series was Clint Smith, staff writer at The Atlantic and author of "Counting Descent," a book of poems published to critical acclaim in 2016, and the forthcoming nonfiction book, "How the Word is Passed," which addresses America's reckoning with its relationship to the history of slavery. He presented stories and poetry with historical context to an audience of over 200 faculty, graduate students and undergraduate students. After illustrating some problems that many students of color face, he described tangible ways to make a difference in academic settings. Smith’s calls to action included the importance of adding historical context to courses taught at universities, reflecting on what stories and histories are included in or omitted from our narratives, and reframing work that may be rooted in deficit models.

“Because of the lack of representation of other academics of color, it can get tough to have those deeper conversations because people do not have the same lived experience. The goal of this series is to answer how we connect with our broader community of color. We want to have experts on race, bias and discrimination in academia present and help to share the basics of how we can do better as a department,” said Juan Hernandez, a third-year clinical psychology graduate student who is also a Sharon Manne Scholar.

The next speaker in the series is Shardé Davis, an assistant professor at the University of Connecticut who created the viral hashtag #Blackintheivory. Her talk will feature how “Blackademics” — Black faculty, postdocs and graduate students— can stand up for truth and make lasting change to the traditional structure of academic institutions, the so-called “Ivory Tower.”

Additional initiatives in the department

The Department of Psychology also recently launched new diversity initiatives including the ENERGIZE Project, designed to make the path easier into research labs for underrepresented students, created an internal Diversity, Equity, Inclusion and Belonging committee — Psych for All — and has raised $85,000 of private philanthropy for a new Jenessa Shapiro Undergraduate Research Scholarship to support underrepresented students who are pursuing research.

Visit the ASU Department of Psychology page for more information about the Amplified Voices group and upcoming presentations.