Shout out to the late night crowd, as another 9 p.m. tip happens Thursday on FS1 when the men's hoops team hosts California.

Sun Devil Soccer unable to generate goals in loss at No. 1 UCLA

‘It shows your commitment to academic excellence’: Nearly 70 Sun Devils Balance Athletics and Academics in Barrett, The Honors College

Sun Devils in the NFL Update 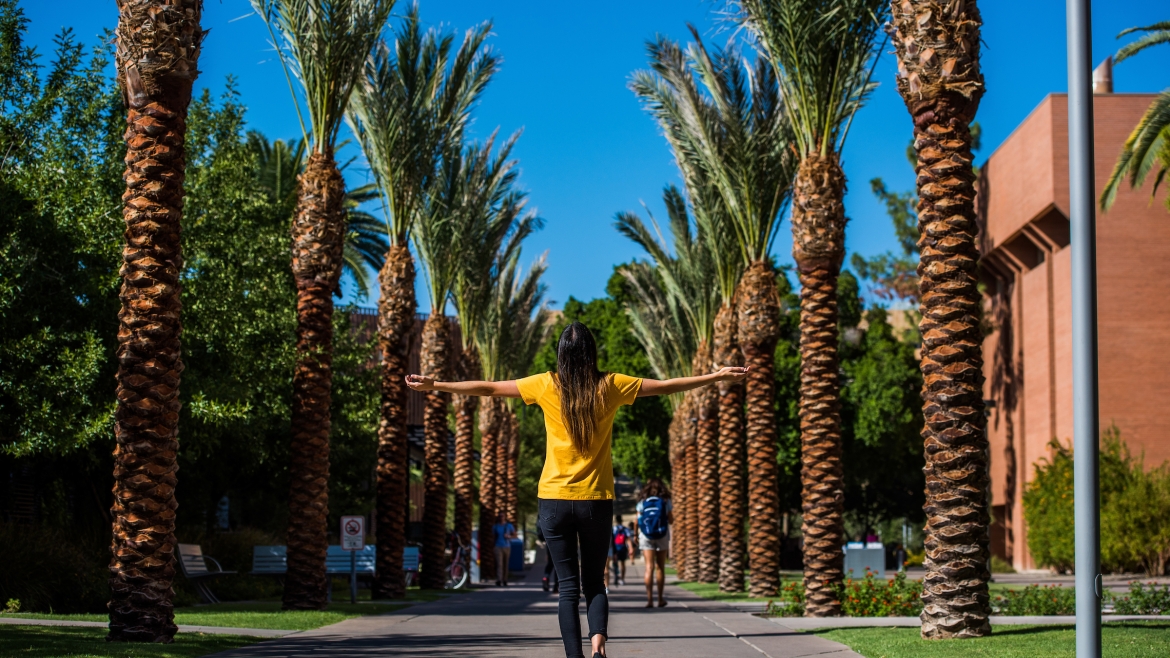 Supporters’ tremendous generosity to Campaign ASU 2020 enabled all of those accomplishments and many more.

Nearly 359,700 individuals, corporations and foundations donated to Arizona State University’s fundraising campaign, which raised $2.35 billion and established a culture of philanthropy across the university. Of those, 213,473 were new donors.

“The resources the university receives from donor investors are among the most impactful support ASU receives,” said ASU President Michael M. Crow during a virtual donor appreciation event Tuesday. “They enable us to fund individual students in making progress, to give special resources to individual faculty members, to create entire faculty chairs that change the trajectory of an academic unit. They help us to maintain all of our initiatives in sustainability and dozens of other engagements that allow us to serve more people and accomplish more for the state; $2.3 billion-plus sounds like a huge number, and it is a huge number, but the impact is infinitely greater than that — it’s infinitely greater in lives changed, trajectory changed, outcomes changed.”

A gift of land enabled ASU’s start, so it’s fitting that philanthropy pushed boundaries and opened up new avenues for faculty, students and the community overall. More than 87.5% of the gifts were less than $100, but there were more than 10,000 gifts of $25,000 or more during the campaign.

“We are extremely grateful for the gifts to support ASU’s vision for what higher education can and should be,” ASU Foundation CEO Gretchen Buhlig said. “Every gift is important, whether it’s $10 or thousands of dollars. It all makes a tremendous impact on our students, faculty and the community.”

RELATED: Celebrating the impact of faculty and staff giving

Another notable campaign milestone is the endowment reached the $1 billion threshold. This achievement enables the university to attract and retain distinguished faculty and their research, provide additional scholarships to students, and offer additional enrichment opportunities and research to solve world problems in perpetuity.

ASU is one of about 45 public universities and 100 universities overall that have an endowment of $1 billion or more, according to the National Association of College and University Business Officers fiscal year 2019 survey.

“This has really been a fantastic opportunity where the campaign has allowed us to amplify our charter,” Crow said. “Our focus on inclusion versus exclusion and the success of our students, our focus on research that benefits the public, and really importantly, our focus on taking responsibility for our community.”

Caring for the ASU and Arizona communities was paramount when the COVID-19 outbreak spiked in March 2019.

“We were very fortunate that the Virginia G. Piper Charitable Trust stood and helped us out in our early response to the COVID-19 outbreak,” said Josh LaBaer, executive director of the Biodesign Institute. “We were contacted by a number of first responder organizations as well as critical infrastructure people, people who run power companies. They have individuals critical to the power grid, but they cannot socially distance. By offering them testing, these people could safely work in their environment and know they weren’t going to infect each other.”

ASU developed a COVID-19 saliva test to offset the shortages of nasal swab tests in Arizona and rapidly scale testing for the ASU community as well as the community at large. The new test was available by the beginning of April, and more than half a million tests have been completed since then, LaBaer said.

“All of this was because of the seed the charitable trust planted by getting us going quickly, by putting that equipment in place, by getting us the supplies we needed to run those tests,” he said. “It got us up and running immediately. That was crucial.”

One student who benefited from donor support is Sonia Villalba, a senior studying communication in The College of Liberal Arts and Sciences. She moved to the United States from Ecuador when she was 5, and her father passed away when she was 11.

“Going to school was a big deal for my family, especially attending a four-year university,” Villalba said. “We never thought we’d have the money to do that. That all changed when I met Chris and Chuck Michaels.”

Charles “Chuck” (’83) and Christine “Chris” (’87) Michaels created a scholarship to help Arizona high school graduates continue their education at their alma mater. They were among 92,479 degreed alumni who donated to ASU during the campaign, which is up 11% from when the campaign began.

“We’ve really tried to not only help financially but to help with mentoring,” Chuck Michaels added.

Villalba is one of 70,969 undergraduate and graduate students who received $253 million in ASU Foundation philanthropic scholarships during the campaign. That’s a 22% increase in scholarship recipients.

While endowed positions are prestigious for the scholars who hold them, they are also marks of distinction for a college, Mari Koerner said. The former dean of Mary Lou Fulton Teachers College became the Alice Wiley Snell Professor of Education in 2015 to 2020. Now a professor emeritus, she said, “An endowed professorship or chair is an act of trust by an individual that an investment in this enterprise, specifically in faculty, will pay dividends through increased knowledge for and impact on the community.”

Koerner’s professorship was not the first to be funded by Richard and Alice Snell. They previously endowed a professorship in education policy studies in The College of Liberal Arts and Sciences’ School of Social Transformation, formerly held by Emeritus Professor Teresa McCarty.

Faculty not only benefited from private support, but also contributed to a culture of philanthropy. Nearly 4,747 faculty and staff members donated during Campaign ASU 2020, doubling the number of employees who gave to ASU at the start of the campaign.

Brent Nannenga, an assistant professor in the School for Engineering of Matter, Transport and Energy, is working with a few others in the university to use advanced technology to understand why toxins attack the brain and a transformational gift from J. Orin and Charlene Edson is bolstering that work.

“It’s been great to finally get the resources to make a difference for Alzheimer’s research,” Nannenga said.

Abigail Gomez Morales, nursing and health care innovation PhD candidate in the Edson College of Nursing and Health Innovation, is combining virtual reality and geriatrics to simulate what Alzheimer’s disease and dementia patients endure to help their caregivers improve communications.

“Thanks to your gift I got an education that gave me all of the foundations that I needed to create this gift for the community,” Gomez Morales said during the virtual donor appreciation event.

Donors contributed to the new, larger Pat Tillman Veterans Center, now located inside ASU 365 Community Union, which also was made possible, in part, from donor support.

The Pat Tillman Veterans Center provides comprehensive resources for about 10,000 student veterans, military active duty, guard and reserve members, as well as their dependents who are utilizing their sponsors’ GI Bill benefits while attending ASU. The center connects them with academic and support services such as assistance with veterans’ benefits, employment and referrals to make the transition from the military smoother.

Chris West and his family established the Family First Scholarship to assist dependents of veterans who died or were completely and permanently disabled while on active duty with their Chapter 35 benefits, which includes 45 months of education and training benefits.

“What’s so important about this group is they fall short of Veterans Administration help by one year,” West said. “It just fell in our lap that this is a great opportunity to pick up this last year for them. When you speak to them, and you can hear in their voice and see the relief you’re bringing to them, it gives me great joy that I’m touching lives and not just writing checks.”

Zylan Cheatham, NBA player and ’19 graduate, wanted to make a difference in the south Phoenix community he grew up in that was surrounded by poverty, gang violence and other challenges.

“I knew I wanted to change things for the next generation of kids,” Cheatham said. “I wanted to get into the classrooms and get into the school systems and donate. Anything I can do to help.”

Cheatham’s gift benefits the ASU Center for Child Well-Being, which works with children whose parents are incarcerated.

“I know I’m going to impact kids that weren’t presented the same resources that everyone else was. That’s pretty much a big thing for me,” he said. “The more educated, the more prepared students are for the next level, for the real world, it’s only going to benefit us in every way.”

Private support is not a replacement for the university’s other sources of revenue, including investments from the state, students, their families, faculty, staff and research grants.

“Private support is critically important to Arizona State University because it enables solutions to problems that can transform lives and improve communities,” Buhlig said. “Private support enables opportunities for growth, innovation and excellence for our students and faculty.”

Although the campaign concluded, fundraising to elevate ASU’s work toward transforming higher education and making it more accessible continues.

“There’s no rest. There’s only where we move to next,” Crow said. “We have already emerged as America’s most innovative university and we are well-positioned by 2025 to be a completely new breed of university. One that impacts the state of Arizona, its residents, businesses and environment and extends across the nation and around the globe.”