Having a heart and brain for the community

Alma Alyssa Manzo was hooked the first time she saw a scientist holding a human brain in their hands. As a sophomore, Manzo saw a graduate student holding a brain at a research lab fair and knew she had to learn more. The introduction to neuroscience and aging kicked into full gear when she began working on transgenic models.

Manzo now plans to go into a nursing PhD program to help instruct caregivers in diverse populations about how to take care of patients with Alzheimer’s, dementia and mild cognitive impairments. 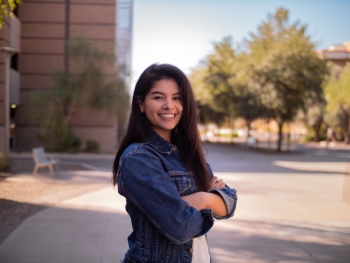 Manzo is a senior in the Arizona State University Department of Psychology who is double majoring in psychology and neuroscience. She is part of the star-studded Behavioral Neuroscience of Memory and Aging lab and is a recent winner of the ASU Changemaker Award for Volunteerism.

The Behavioral Neuroscience of Memory and Aging Lab, led by President’s Professor Heather Bimonte-Nelson, investigates the roles of hormones and brain chemistry in brain function and cognition with age. Much of the research in the lab centers on the transition to menopause and cognition in females. Many of the lab members have been named Dean’s Medalists, Fulbright Scholars and Barrett Award winners.

“From the day I met Alyssa at a brain outreach event, I knew she was a superstar," said Stephanie Koebele, a postdoctoral researcher in the Bimonte-Nelson lab who was holding the brain that caught Manzo’s attention two years ago. "She has been a wonderful asset to our lab team over the past several years. Alyssa is inquisitive, compassionate, dependable, unafraid to ask questions, radiates positivity and is an overall joy to work with. Her drive to constantly learn is palpable. I am continually inspired by her community-minded attitude and thoughtfulness about inclusivity in science and society. I am in awe of her creation of and commitment to the Swift Youth Foundation to inspire youth to pursue higher education.”

Manzo's experience in the lab pushed her to think about what other options are out there, beyond basic science research.

One thing that really stuck with her was Bimonte-Nelson’s work with hosting Brain Fairs for Title I schools to provide hands-on experience for underserved students. These students may not have the same resources as other students, but Bimonte-Nelson wanted to show how attainable a college degree is and why it should be a goal of theirs. Manzo and other members of the Bimonte-Nelson lab hosted the events, creating brain models with clay and pipe cleaners, teaching students about brain regions and synapses, as well as answering questions about college.

“It was so impactful to see how you can show kids a really different perspective and future than they ever believed to be possible,” Manzo said.

Manzo took this foundation of mentorship with her to the Swift Youth Foundation — a summer camp and year-round mentoring foundation for economically disadvantaged youth. At this camp, she ran activities, games, helped instruct science in a fun way.

“I wanted to do a bit more and bring the college experience to the kids to show them what college is like and why they should aspire for higher education,” Manzo said.

She began the Swift Club at ASU and grew it from three members to over 40 in a little over a year. Together the Swift Club partnered with the Swift Youth Foundation to create “Swift University.”

Manzo and the Swift Club won the Fall Changemaker Service Award for their impact in volunteerism for running this Swift University Program for underserved communities. In this program, they led elementary students through different activities based on four college majors — psychology, chemistry, physics and English. Students explored neuroscience through clay models of brains, worked through chemical equations to produce slime, conducted static electricity and wrote letters to their friends and family. These hands-on activities were designed to illustrate the wide range of fields that are available both in STEM and non-STEM majors.

“Having this mentor experience is just so amazing because I also came from a Title I school. I would have loved to speak with college students about their experiences and to learn from them. I know exactly where they are coming from and I know many of the challenges they are currently facing,” Manzo said. “Being able to make a difference in their lives is incredibly gratifying and I am excited to show that it is possible to make it at the next level.”

Not only has Manzo been a positive role-model for young students, she has been a key member of the Bimonte-Nelson lab and struck a chord with her mentor.

"It has been a joy to watch Alyssa find her passion in science," Bimonte-Nelson said. "Through the years it has become clear that her motivation for becoming a scientist is to help people with dementia and their caregivers, with a focus on inclusion of diverse populations in scientific studies to improve health outcomes. This young scientist thinks deeply, maintains a calm demeanor even during the highest stress periods, and asks thoughtful, relevant, and important questions reflecting her focus on helping people. Alyssa is going to be a fabulous doctoral student, and I cannot wait to see all of the impacts she will make on the world."