Human females rely on aids like charting, test strips or wearable tech to identify periods of fertility, while some animals, like baboons, undergo obvious physical changes during ovulation. How did fertility become so hard to detect in humans?

For nearly half a century, the evolution of concealed ovulation in human females has been explained as useful for securing male partners to help raise and support children. A study published Jan. 25 in Nature Human Behaviour casts doubt on this long-standing idea. Using agent-based computational models, a team of evolutionary scientists has shown that concealed ovulation might have actually evolved to allow females to hide their fertility status from other females. 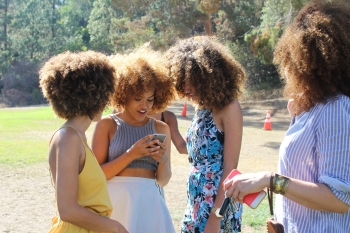 A study using agent-based computational modeling has shown that human females likely evolved to conceal ovulation from each other, not from males. Photo by Samantha Sophia/Unsplash. Download Full Image

“The study of human evolution has tended to look at things from a male perspective, and even adaptations specific to females – like their social behavior and concealed ovulation – have been viewed in terms of how males shape them," said Athena Aktipis, associate professor of psychology at Arizona State University and senior author on the paper. "This study challenges the idea that the role of female sociality is to better secure male partners and their resources; our computational model shows female sociality is about much more than securing male investment."

Out with the old, in with the new

The idea that females evolved to conceal ovulation from males to encourage them to help with children, called the male investment hypothesis, was proposed as a way of understanding why human females do not advertise ovulation. This hypothesis has been the predominant explanation for female sociality and concealed ovulation for decades, though it has undergone few empirical tests and has not been formally modeled until now.

But females do not just interact with males. They interact with each other, sometimes cooperating and other times engaging in conflict.

“I have been puzzling over the male investment hypothesis for years, and because you cannot argue with a verbal hypothesis, I started work on how to test it,” Aktipis said. “At the same time, I was working on female sociality and it struck me that females could have been aggressing against other females showing ovulatory cues, which then would create a benefit to concealing ovulation.”

The team of evolutionary scientists tested the idea that female conflict might have driven the evolution of concealed ovulation, which they call the female rivalry hypothesis, using an agent-based computational model. Evolutionary adaptations in humans happen on the timescale of many generations, which makes it hard to test whether or how traits might evolve. Computational modeling allows researchers to test ideas that would be hard to test in the real world.

In agent-based computational models, an agent represents an individual whose behavior can be programmed and analyzed. Each agent follows a specific set of rules and can interact with other agents and with the environment. In the model developed to test the female rivalry hypothesis, male and female agents followed rules governing their movement, reproductive behavior and attractiveness.

The male agents varied in terms of their promiscuity. Promiscuous males did not partner with females to help raise subsequent children, while male agents that were not promiscuous stuck around to share resources and support future children.

Female agents either had physical cues indicating when they were ovulating or ovulation was concealed. The female agents could also aggress against each other.

The female and male agents interacted with each other and had opportunities to procreate and form parenting partnerships. The model supported the female rivalry hypothesis by showing that females who concealed ovulation fared better. They had more children, avoided female-female aggression and succeeded in forming parenting relationships with males.

“Work in social science has tended to assume that male cognition and behavior is the default. But females recurrently face some unique challenges — particularly in their interactions with other females. This work is the result, in part, of taking that idea seriously. When we do that, I think we’ll learn more, not just about the female mind, but about the human mind,” said Jaimie Arona Krems, assistant professor of psychology at Oklahoma State University and first author on the paper.

The research team also used the model to test the male investment hypothesis, by running scenarios that did not allow females to aggress against each other. But there was no clear benefit from concealing ovulation in this scenario, suggesting that concealed ovulation in females might not have evolved because of interactions with males, but rather because of interactions with other females.

“This work represents a necessary shift in thinking about how human females have evolved. Female sociality and other adaptations are not just about securing male investment, even though that has long been the underlying assumption about the purpose of female social behavior,” Aktipis said.

No. 8 Arizona State has rescheduled their quadrangular tournament with Iowa State, Northern Iowa and Central Michigan. ... No. 8 Arizona State has rescheduled their quadrangular tournament with Iowa State, Northern Iowa and Central Michigan.