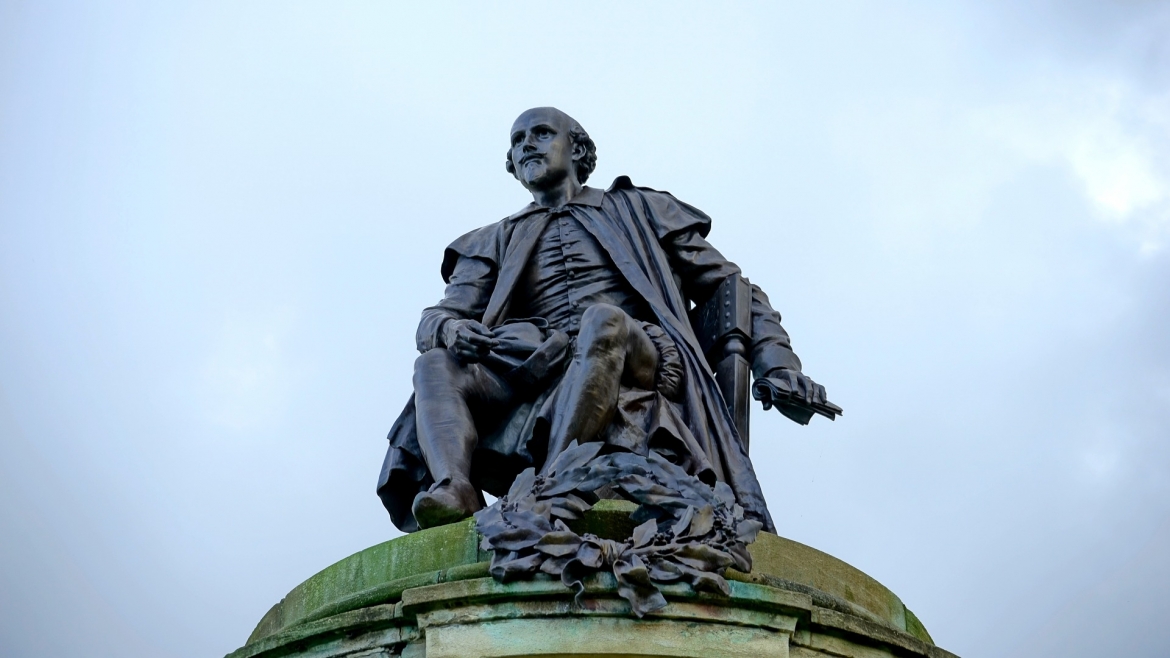 Education the key to systemic change

As the turbulent summer of 2020 wound to a close, with the nation still reeling after the killing of George Floyd ignited a spate of Black Lives Matter protests calling for an end to systemic racism and violence directed at Black people and communities of color, Arizona State University announced its commitment to a 25-step plan for the advancement of its Black students and community members.

It is education, after all, that is the key to achieving systemic change, said Ayanna Thompson, ASU Regents Professor of English and director of the Arizona Center for Medieval and Renaissance Studies.

Since 2019, Thompson has been at the helm of the RaceB4Race symposium, a biannual conference series she founded that invites scholars of premodern studies to consider the study of race through the framework of classical texts.

Thompson on Wednesday welcomed attendees to the first day of this year’s four-day virtual conference by reflecting on the significance of the day, one which saw the replacement of an administration that in September 2020 issued an order to the heads of federal agencies banning funding for antiracist trainings, warning them that “the divisive, false and demeaning propaganda of the critical race theory movement is contrary to all we stand for as Americans and should have no place in the federal government.”

“While I rarely agree with the previous administration's policies of rhetoric, I wonder if they were correct declaring critical race theory a movement,” Thompson said. “And while I assume that the directive will be withdrawn by the new administration, the memo reminds us all how important education is for achieving systemic change.

The two guest speakers for the symposium’s opening event were Ian Smith, professor of English at Lafayette College in Pennsylvania, who gave a talk titled “Racial Literacy: A Reckoning,” and Adrienne Merritt, a visiting assistant professor of German studies at St. Olaf College in Minnesota, who gave a talk titled “Feirefiz, White Legacies, and Interraciality: Teaching German Studies While Black in America.”

The purpose of their and other symposium speakers’ talks, Thompson explained, is to “interrogate how we teach our fields, why we teach our fields and who we implicitly and explicitly include and exclude in the process,” reminding the audience that the Jamaican-born Stewart Hall was once dissuaded from becoming a medievalist, and beloved American novelist Toni Morrison was once dissuaded from becoming an early modernist. (Neither listened to their dissenters.)

“If we remember those injustices, we must push and pull with BIPOCBlack, Indigenous and people of color students,” Thompson said. “I am fond of saying that we BIPOC folks have always been here, and that we have rich histories, but that our education systems have not always taught those rich histories. The speakers at this gathering of RaceB4Race will challenge us all to rethink our pedagogical approaches to both premodern literature, history and culture and critical race studies.” 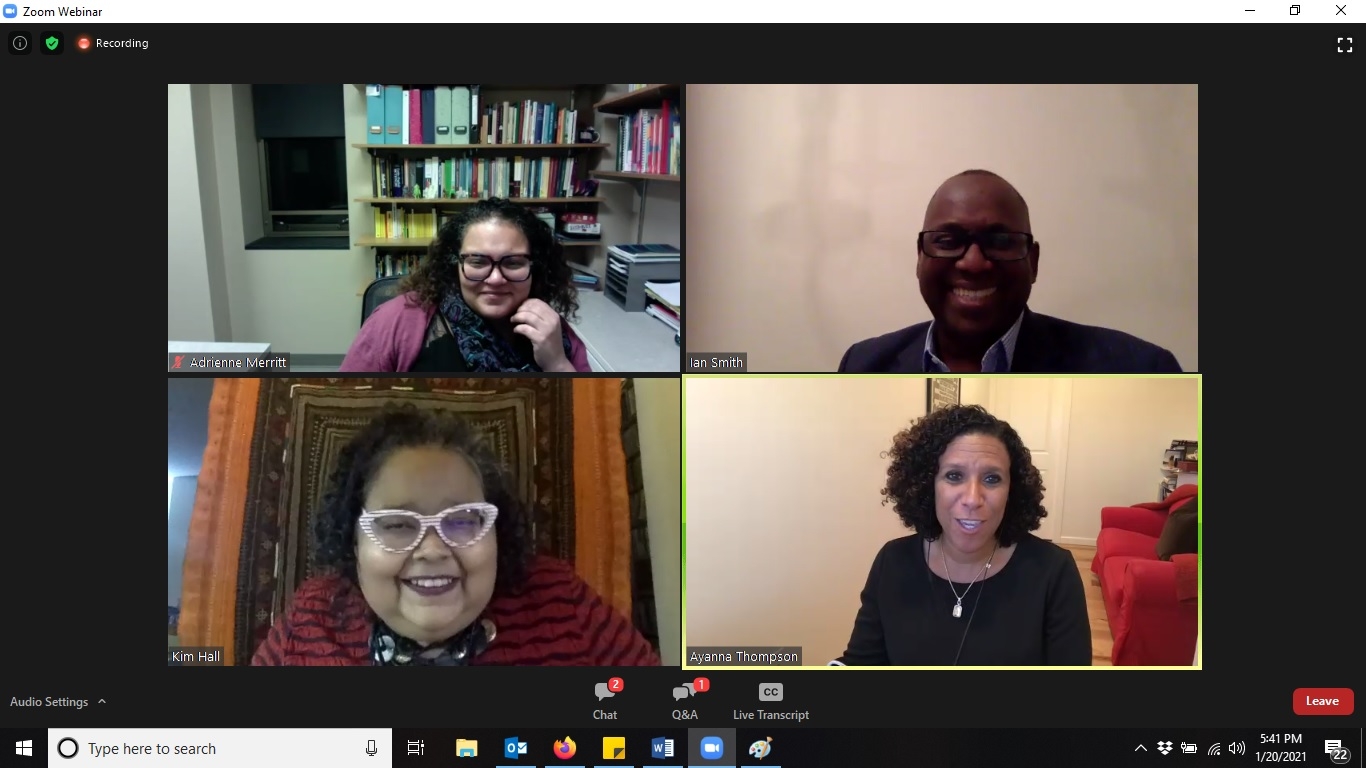 Following Smith’s and Merritt’s talks, Barnard College Lucyle Hook Professor of English and Africana Studies Kim Hall moderated a question and answer session between the duo and symposium attendees. Hall began the session by reflecting on a quote from each talk that speaks to larger issues at play in society today.

From Merritt’s talk, Hall quoted a statement about how the denial of imagined supremacy and literary whiteness in Germanic medieval literary study allows such legacies to continue to flourish.

“One look of the footage of the recently attempted coup by right-wing insurrectionists in D.C. details the continued presence of Germanic medieval symbolism and ideology,” Merritt said. “I choose to name German studies for what it is, enveloped in whiteness, and by doing so, break the silence concerning the legacy of imagined supremacy.”

From Smith’s talk, Hall quoted questions he asked about how the recent proliferation of critical race readings of texts and the rise of the field of early modern critical race studies may change the work of reading and teaching Shakespeare in particular, and in turn, the effect that may have on modern day consumption of Black culture.

“Race is evident everywhere in Shakespeare,” Smith said. “In early modern drama, it resides in plain sight. But what has this meant to our profession? What must it mean today for our own critical investments in early modern texts? Is Blackness … still something to be consumed but not necessarily anything to engage with? … Here then is an opportunity to consider the work of racial literacy … Racial literacy is understanding the racism structured into every aspect of our society and accepting the quality of others, their experiences and lives as part of the democracy we build.”

One of the most important questions Smith and Merritt addressed was how to effectively bring the moral reflection and reckoning required by critical race studies into classrooms of students from a variety of backgrounds, in a way that will help them learn and unlearn assumptions about whiteness that unknowingly color their interpretations of literature.

“That work in the classroom is slow. It takes time. It is not a quick fix,” Smith said. “Students grow significantly as undergraduates … and you need to get them engaged in the conversations over and over again … because each time you return to it, it has the possibility of meeting them in different places at different times and having a different sort of impact. This is why I think institutions need to make the firm commitment to this kind of work, so it can encompass the time that is needed.”

There are still two days’-worth of talks left in the symposium, including “coffee talks” with  Geoffrey Way, manager of Publishing Futures for the Arizona Center for Medieval and Renaissance Studies, and Farah Karim-Cooper, professor of Shakespeare studies at King’s College London, as well as talks and discussions by scholars including Eric L. De Barros, Old Dominion University assistant professor of English, and Barbara Bordalejo, University of Saskatchewan professor of English and digital humanities.

The next RaceB4Race symposium is scheduled to take place in April, with the theme of politics.

Golden Gophers show no mercy in offensive explosion on the ice in Minneapolis ...