Message in a bottle: Info-rich bubbles respond to antibiotics

Once regarded as merely cast-off waste products of cellular life, bacterial membrane vesicles (MVs) have since become an exciting new avenue of research, due to the wealth of biological information they carry to other bacteria as well as other cell types.

These tiny particles, produced by most bacteria, can bud off from outer cellular membranes, traveling along cell surfaces and occasionally migrating into intercellular spaces. 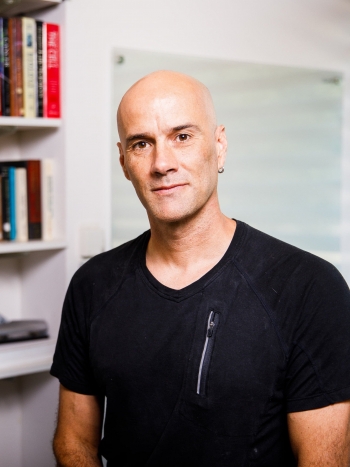 Luis Cisneros is a researcher in the Biodesign Center for Biocomputing, Security and Society, and the BEYOND Center for Fundamental Concepts in Science at Arizona State University. Download Full Image

In a new study, Luis H. Cisneros and his colleagues describe the effects of antibiotics on membrane vesicles, demonstrating that such drugs actively modify the properties of vesicle transport. Under the influence of antibiotics, MVs were produced and released by bacteria in greater abundance and traveled faster and farther from their origin.

The researchers suggest that the altered behaviors of MVs may represent a stress response to the presence of antibiotics and further, that MVs liberated from the cell membrane may transmit urgent warning signals to neighboring cells and perhaps foster antibiotic resistance.

"It’s long been believed that membrane vesicles are involved in the cell-cell signaling process leading to changes in the collective behavior of living cells, like the coordination of survival responses due to antibiotic stress,” Cisneros said. "But many details in the dynamics of this process are not yet well understood. Our work opens a new door in this field.”

Cisneros is a researcher in the Biodesign Center for Biocomputing, Security and Society, and the BEYOND Center for Fundamental Concepts in Science at Arizona State University. He is joined by Julia Bos and Didier Mazel, colleagues from the Institut Pasteur, Paris.

The research findings appear in the current issue of the journal Science Advances.

Membrane vesicles — encapsulated particles shed from the membranes of bacteria — are conduits of information. Like nanoscale flash drives, they can encode and carry volumes of data in the form of polysaccharides, proteins, DNAs, RNAs, metabolites, enzymes and toxins. They also express many proteins on their outer membrane that are derived from the bacterial surfaces from which they were exuded.

Groundbreaking research on the mechanisms controlling vesicles traffic were awarded a Nobel Prize in physiology and medicine in 2013 and are currently being used to package the SPIKE mRNA in the long-awaited COVID-19 vaccine.

The rich storehouse of information carried by MVs and its ultimate effect on bacterial and nonbacterial cells is of great scientific and medical concern. In addition to alerting fellow bacteria of environmental stresses like antibiotics, MVs have been implicated in the quorum sensing activities that inform bacteria of overall population densities and may even affect brain processes in higher mammals. This could occur if MVs produced by gut microbes transport their cargo to the nervous system.

Membrane vesicles are common to all life kingdoms, from bacteria and other unicellular organisms to archaea and eukaryotic cells found in multicellular organisms, including cancer cells. Depending on the cell type from which they emerge, they have been implicated as vital contributors to intercellular communication, coagulation, inflammatory processes and the genesis of tumors, as well as playing a role in the biology of stem cells.

Despite their importance however, MVs have received inadequate attention until recently. Due to their diminutive nature, measuring between 20 and 400 nanometers in diameter, they are a challenging subject of study, particularly in their natural state within living systems.

Key to gaining insight into the subtle behavior of MVs has been technological advances that allow them to be closely observed. The new study outlines sophisticated methods of florescence microscopy and data analysis used to track the production and transport of MVs under laboratory scrutiny.

Traditionally, MVs have been studied with the aid of biochemical techniques, electron microscopy and atomic force microscopy. These methods have helped researchers probe the contents of MVs, which may contain nucleic acids, proteins, lipids, various toxins, antibiotics, phage receptors, signaling molecules, metabolites, metals and growth factors. The precise composition of MVs is dependent on physiological details of the mother cell as well as the mode by which the MVs are formed.

Likewise, numerous factors can affect the formation and release of MVs. These include antibiotics and chemotherapy drugs, environmental influences, cell death and necrosis as well as damage to the bacterium’s DNA. The heightened production and transport of MVs may be a generalized response to bacterial stress.

The downstream effects of MV transport likewise remain a topic of considerable speculation. The release of MVs appears to be involved in a number of critical biological processes including cell-cell communication, horizontal gene transfer, social phenomena and immune response modulation. Importantly, they are also believed to act as decoys for antibiotics.

To better understand these and other attributes of MVs in living systems, it is vital to closely follow their movements over time. The current study represents the first high-resolution, quantitative tracking of MVs in response to antibiotic treatment.

According to Bos, corresponding author of the new study, “This is the first evidence that tracking thousands of individual membrane vesicle trajectories in real time in a live population of microorganisms has been achieved. Gaining insights into how they move and locate themselves within a bacterial microcolony and how their motion properties could be a signature of antibiotic stress, will undoubtedly open a new avenue of research on this fascinating and currently hot topic.”

The study helps advance our understanding of these as-yet mysterious entities while potentially paving the way for a range of applications in immunology and biotechnology.

The Sun Devils are ready for a weekend of action in Texas. ... The Sun Devils are ready for a weekend of action in Texas.