From a pair of simple principles of evolution — chance mutation and natural selection — nature has constructed an almost unfathomable richness of life around us. Despite our scientific sophistication, human design and engineering have struggled to emulate nature’s techniques and her inexhaustible inventiveness. But that may be changing.

In a new perspective article, Stephanie Forrest and Risto Miikkulainen explore a domain known as evolutionary computation (EC), in which aspects of Darwinian evolution are simulated in computer systems. 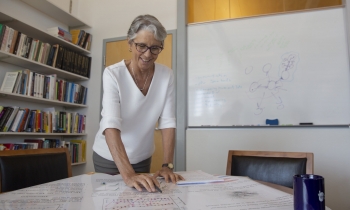 The study highlights the progress our machines have made in replicating evolutionary processes and what this could mean for engineering design, software refinement, gaming strategy, robotics and even medicine, while fostering a deeper insight into foundational issues in biological evolution.

“With the vast computing resources available today, evolutionary computation is poised to provide the next generation of advances in AI,” Forrest said.

Forrest directs the Biodesign Center for Biocomputing, Security and Society at Arizona State University. Miikkulainen is from the University of Texas, Austin.

Their research findings appear in the current issue of the journal Nature Machine Intelligence.

The paper focuses on six hallmarks of Darwinian evolution and examines how well digital systems have managed to duplicate these features in order to find solutions to complex problems and generate novel outcomes. These are: openendedness, major transitions in organizational structure, neutrality and random drift, multi-objectivity, complex genotype-to-phenotype mappings, and co-evolution.

Darwin’s remarkable insight reveals how a random iterative process can act on an initial set of conditions to continually improve an organism’s fitness — its ability to flourish and reproduce. By implementing these mechanisms, known as evolutionary computation, computer scientists attempt to evolve solutions to various problems over time, through similar processes of mutation and selection, rather than by designing such solutions by hand.

The use of evolutionary computation involves creating an initial population of individuals on a computer, then evolving the population over time, using principles of variation, selection and inheritance. While the basic idea is simple, the subtleties involved can become dizzyingly complex. Evolutionary computational approaches are also highly versatile, allowing researchers to model biological systems that change with time, such as ecologies or cancer, as well as social systems, including economies or political dynamics.

In principle, virtually any system or technique has the potential for some degree of computer automation, including the design, development and debugging of computer programs, a longstanding goal in computer science.

One reason researchers are so excited about borrowing a page from nature’s playbook is that the use of evolutionary principles can lead to wildly original solutions that cannot be predicted in advance, allowing computers to make better guesses than their flesh-and-blood counterparts.

The exciting developments in evolutionary computation are being driven by ever-more-sophisticated algorithms as well as enormously advanced computing power, which has increased millions of times over the past 20 years. This has enabled the careful modeling of a broad range of real-world processes, including the simulation and design of new formulas for agricultural growth, smart treatments for injuries and disease and the fine-tuned control of robots and autonomous machines.

Of the six evolutionary hallmarks highlighted in the study, researchers have made significant inroads in applying several of them. One startling feature of evolution is its openendedness, or ability to advance transformational processes indefinitely, without an established final state. The study cites several examples of artificial life programs that have achieved a measure of openendedness.

Multi-objectivity alludes to the complexity of biological fitness, which results as a consequence of various trade-offs, for example, between resources expended to find food as opposed to attracting mates, producing sufficient offspring and protecting young. Many such features must balance one another to achieve maximum reproductive success. Researchers have recently made progress mimicking multi-objectivity in programs using EC.

Another critical feature of Darwinian evolution that has been modeled in EC systems is coevolution — the phenomenon of multiple species interacting over the course of evolutionary time, through complex networks of cooperation and competition. Such dynamics have found their way into EC applications including game playing, robot navigation and multiagent problem solving.

Nevertheless, nature keeps some evolutionary cards close to her vest. Certain Darwinian processes have proven more difficult than others to co-opt for problem-solving computer programs. Further, while techniques of evolutionary computation can often mimic processes found in nature, there are also significant differences. Unlike Darwinian evolution among living species, EC tends to operate by applying strong selection pressure to small populations, where more neutral processes such as genetic drift are suppressed.

Further, in nature, the genetic template from which the final organismic form or phenotype will emerge is much more flexible and subject to embryological and epigenetic modifications, allowing for more creative and unpredictable outcomes. Researchers would like to improve this genotype-to-phenotype mapping, incorporating rich environmental interactions to better approximate nature’s profound ability to generate novelty.

Finally, evolution’s most impressive feat remains too poorly understood to be replicated by computer, namely the ability to achieve major organizational transitions. Here, Darwinian processes can act over time to yield convulsive and unforeseen alterations in structure, for example, the progression from self-replicating molecules to membrane-bound cells, multicellular organisms, advanced social structures and societies with language and culture. Much more work is needed to ferret out the details of nature’s organizational transitions.

Nevertheless, the startling advances in evolutionary computation are likely to play a guiding role in the development of machine creativity, drive innovations in engineering and hopefully, elucidate some of the many mysteries still remaining in the study of evolution.

The 2020 pandemic changed many things including the college experience for first-year students. The excitement to attend the first football game as a new addition to the Sun Devil family and step foot into their first-ever college lecture, for the most part, did not happen traditionally. Though it was challenging and uncertain how the future would look, many of the freshmen from Arizona State Univ...

The 2020 pandemic changed many things including the college experience for first-year students.

The excitement to attend the first football game as a new addition to the Sun Devil family and step foot into their first-ever college lecture, for the most part, did not happen traditionally. Though it was challenging and uncertain how the future would look, many of the freshmen from Arizona State University's School of Molecular Sciences did not let the pandemic get in the way of achieving their academic goals. 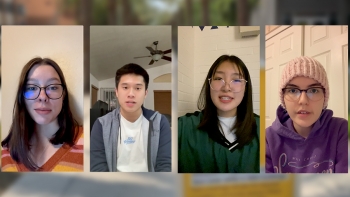 Here, several first-year students from the school talk about their first semester at ASU in the middle of the pandemic.

Sydney Pickett is in the BS biochemistry program; she is one of the many students who excelled in her first semester at the School of Molecular Sciences. Her drive to attain her goals comes from her dream of attending medical school.

“Overwhelming” was the word she used to describe her first semester of college. Her biggest challenge was being an out-of-state student: Not knowing anyone from Arizona and also trying to adjust to a new city and a completely new environment made her nervous.

She felt homesick often but was able to overcome it with the help of her support system back at home. With her family and friends' encouragement she achieved her goals of meeting new people by stepping outside of her comfort zone, on top of attaining straight As for the semester.

Her new goals for the year are to get a shadowing position and maintain her 4.0 GPA.

“One thing I learned is that it is OK to make mistakes and to mess up sometimes. Just be resilient and do not give up,” she said.

Eric Do, a BS medicinal biochemistry major, on the other hand, was frustrated when he realized that his first semester of college would be during the pandemic. He didn’t get to meet new people or explore the ASU campus as much as he wanted to.

For him the online learning environment was challenging due to it being difficult to focus in a setting outside of a physical classroom. One of his most difficult courses of the semester was CHM 117: General Chemistry for Majors I. Though it was challenging, a perk he received was attending the in-person lab with fewer students, which allowed him to ask the lab instructor more questions if he had any.

His motivation to succeed this semester came from his goals, friends who were in the same situation and his aspirations to become a future pharmacist, which helped him attain straight As. His goals for the upcoming semester are to improve his work-life balance.

“I would like to thank my instructor Tim Lamb for being my guide through my first semester,” he said.

Jessica Wang is a medicinal biochemistry BS major who has looked forward to her first year in college since she was a child. She wanted to explore her independence, and she knew traveling across the country was the best way to achieve it.

But due to the pandemic, she was initially disappointed with the way her experience turned out.

“I felt as though I was taking a step backwards towards my self growth rather than it being an opportunity for new experiences,” she said.

What kept her motivated through the semester was her goal of self growth and sense of independence. She found herself doing something different every week, and while it felt overwhelming at times, she never wanted it to stop. She has made the most of her time at ASU by taking advantage of great opportunities that came her way.

She also made good friends during the first semester.

“I got very lucky this semester. Having made such a strong friendship with my roommate, we spend most of our time together,” she said.

Although it was not ideal, Gabriella Cerna, who is majoring in biochemistry and microbiology, was very grateful that she had the opportunity to attend college in a safe environment.

Transformative is the word she used to describe her semester, because she was able to discover herself and her beliefs through being exposed to many different ideas and viewpoints. Her biggest motivation was her drive to continue learning.

“Instead of focusing on external factors like grades, I concerned myself with truly enjoying and understanding the content in my classes,” she said.

During her first year she gained a valuable growth mindset that has allowed her to become a more resilient individual and create attainable goals.

Even though this year was not picture perfect for these students, they found ways to make it work for them. They were able to overcome many hurdles that were passed their way through the pandemic, and instead of giving up, they excelled and pushed forward toward their goals of success.