Being a graduate student at Arizona State University is demanding enough for most, but the COVID-19 pandemic has made it even more challenging. 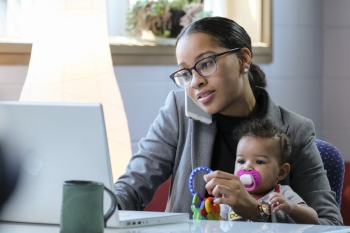 “In our efforts to provide relief to students impacted by the COVID-19 pandemic, we recognized that many graduate students are also caregivers for other family members," said Mark Searle, ASU’s executive vice president and university provost. Download Full Image

“In our efforts to provide relief to students impacted by the COVID-19 pandemic, we recognized that many graduate students are also caregivers for other family members, including children unable to attend school, and this has increased the challenges they face in completing their degrees,” said Mark Searle, ASU’s executive vice president and university provost.

To meet this challenge, the Graduate College introduced the Caregiver Assistance Fellowship to financially assist graduate students who are sacrificing part of their already busy schedule to care for a child, dependent adult or elderly family member.

“Earning a graduate degree is an incredible achievement that is challenging under the best of circumstances,” said Elizabeth Wentz, vice provost and dean of the Graduate College. “ASU graduate students have demonstrated unbelievable resilience during the COVID-19 pandemic, but many are struggling to juggle work, teaching, research and taking care of family members. It was important for us to find a way to help.”

The Caregiver Assistance Fellowship is primarily intended for graduate students who can not work or hold an assistantship during the 2020–21 academic year, due to their role as a caregiver to family members that are unable to attend school or care facilities.

“With the Caregiver Assistance fund, we hope to ease the burden on graduate students caring for others while also trying to complete their degree and express our commitment to their success,” Searle said.

Fellowships of up to $2,500 per semester are being awarded to eligible applicants. While the funding is limited to this academic year, the Graduate College hopes to expand this funding in the future through their work with the ASU Foundation.

The Graduate College has been supporting graduate students during these difficult circumstances with other initiatives like the Pandemic Impact Award, which provided funding to graduate students whose research and culminating projects were impacted by COVID-19. Many students utilized the funding for alternative data collection activities or to purchase materials and supplies to continue their research activities during unanticipated closures.

“Graduate students play a vital role in ASU's teaching, research and innovation mission so it's important for us to provide them with the support they need to be successful, particularly now,” Searle said.

Eligibility and application requirements for the Caregiver Assistance Fellowship can be found on the information page.

There are also additional resources available to graduate student caregivers:

• Graduate students caring for children while holding teaching or research assistant positions can use the Busy Bee babysitting program at a discount.

• The ASU Dean of Students Office also has funding available for students in crisis. For more information contact deanofstudents@asu.edu.

Written by Emily Carman, graduate student at the Walter Cronkite School of Journalism and Mass Communication.

On Jan. 7, The College of Liberal Arts and Sciences at Arizona State University hosted a virtual screening and discussion of “Picture a Scientist” — a documentary film that chronicles the groundswell of researchers who are writing a new chapter for female scientists. The film, an official selection of the 2020 Tribeca Film Festival, follows a biologist, chemist and geologist’s experiences...

On Jan. 7, The College of Liberal Arts and Sciences at Arizona State University hosted a virtual screening and discussion of “Picture a Scientist” — a documentary film that chronicles the groundswell of researchers who are writing a new chapter for female scientists.

The film, an official selection of the 2020 Tribeca Film Festival, follows a biologist, chemist and geologist’s experiences in the sciences, overcoming harassment, institutional discrimination and subtle slights to revolutionize the culture of sciences.

The livestreamed discussion was led by Nancy Gonzales, provost pro tempore and outgoing dean of natural sciences, and Raychelle Burks, professor of analytical chemistry at American University in Washington, D.C., and one of the scientists featured in the documentary.

Discussing her thoughts on the film, Burks said she feels it helps illuminate the different types of harassment happening in the science world.

“People tend to be very focused on the gratuitous sexual harrassment and sexual assault — which of course is shocking and violating — but it’s also all of the gendered harassment that is more common,” Burks said. “Asking women to take notes, to fetch your coffee, not inviting them to key meetings, giving them twice as much service work. ... To hear all the stories and see all the data presented in that way makes it very clear that this is a systemic problem.”

As part of ASU’s Innovation Quarter, the event included discussions from three esteemed panels of ASU faculty and leaders who answered questions around the themes of equity and inclusion in science, technology, engineering and mathematics (STEM).

Progress and the barriers that remain

The first panel featured a group of distinguished female faculty in the sciences and engineering who discussed their own experiences in the field, the progress being made in STEM and the barriers that remain in ensuring more equitable environments: 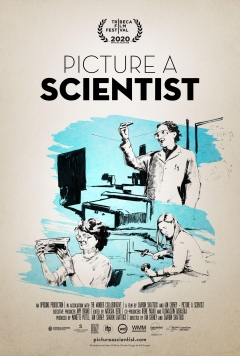 Wadhwa reflected on the ways in which women and minoritized groups, not only in the film but in many labs around the country, are often pushed out of STEM fields because of bullying, harassment and exclusionary behaviors.

In discussing how she believes this can be addressed, she said there are two main aspects.

“One needs to create a culture, a climate that's inclusive and welcoming. The second is that we need to address structural and systemic issues. We’re actively working to address both of these in my school,” Wadhwa said.

Reiterating a point made by Burks in the film, Wadhwa said she believes it's crucial to create a workplace environment where women and minorities don't feel invisible but they also don't feel hypervisible. She shared that the School of Earth and Space Exploration hosts monthly community conversations where anyone can share information, feedback and commentary in an effort to encourage awareness and an open dialogue.

When asked where she sees positive change happening in STEM, Elkins-Tanton said she feels progress is being made because these issues are being openly discussed.

“The change we’re trying to make is a change in culture, a change in expectation, a change in our subconscious reactions and thus our implicit bias — and it starts with new laws and policies, but that's not enough,” Elkins-Tanton said. “The change becomes real when we all see all people as equally deserving and equally promising — that has to be brought about by talking.”

The role of male allies in creating systemic change

The second panel, consisting of five men currently in leadership roles at ASU, discussed how men can be institutional allies to women in STEM and their roles in impacting institutional practices and culture at universities:

Morris spoke about how as systemic problems, these issues require systemic change.

“I think for men, generally speaking, we’ve got to recognize that sometimes we’re comfortable with systems that are broken. If the system is actually discriminatory, we may have to change elements of the system,” Morris said. “The approach that would make the most sense to me is actually interrogating the system as it is, challenging it and changing it.”

He went on to say he feels leadership must be brave enough to challenge and turn the system on its head, while not just simply modifying or adding things so people can get through the system as it exists.

In discussing some of the men in the film, Boone said it is clear that even friends and allies need to work harder together to continue to learn and do better. When asked what his ideas are to encourage men and other allies to develop greater empathy, he said he believes it starts with giving them the opportunity to explore how they would react when presented with circumstances of workplace discrimination and other related issues.

“There’s lots of reasons why people don’t speak out, fear of retribution, whether it’s violent or verbal. I think people also freeze in the moment, they don’t know what to do because this is outside of what they consider ordinary behavior, at least for themselves,” Boone said. “So I think we need to do a better job of putting people into those scenarios where they can at least have a sense of ‘what could the potential intervention be.’”

Reflecting on the ways his path and that of his male colleagues may have been made easier than that of women and other minoritized populations, Kenney added that one pervasive force he recognizes is white male privilege.

“You have no idea how powerful it is as you move along,” Kenney said. “White male privilege is there from the get-go, it doesn’t go away and it probably has a multiplier effect across time.”

The importance of mentorship, innovation and awareness

The final panel, consisting of five women who are earlier in their teaching careers in the sciences and engineering, discussed and shared resources they have found supportive in achieving their professional goals as academics:

Florsheim shared how eager she is to be able to explore topics nobody has studied before while finding new things and potentially helping people through her work as a member of ASU’s faculty.

“As a member of the professoriate I think what will be exciting is to connect with people — to collaborate, to mentor and to brainstorm new ideas. I don’t think there’s innovation without a diverse group of people generating new ideas,” Florsheim said.

Perez added that mentorship has been a crucial part of her own personal success in STEM. After becoming connected to several mentors through the National Science Foundation’s advanced scholars program, she said her outlook and career aspirations changed for the better.

“That changed my developmental path in my career,” Perez said. “They fundamentally changed my view and most importantly, they showed me the playbook. There was nobody that was a leader in my field that looked like me. My mentors really helped me step by step in teaching the playbook and I think that was just vital.”

In talking about efforts and initiatives taking place within their labs, schools and departments, Coley shared how she is leading a book club for faculty and staff called the Fulton School of Engineering Equity Book Club, in an effort to combat the myth that constructs of racism and sexism exist in the world but not overtly in academic environments.

“We’re trying to elevate the standards of responsibility. Where is it no longer enough to say, ‘I didn’t know?’ or ‘I didn’t see that?’ How can we prepare people to navigate as professionals in this realm?” Coley said. “The goal is that through educational awareness, we’ll be able to expose people to more evidence.”

Empowering STEM professionals to be agents of change

Gonzales said conversations like the ones had during the virtual panel sessions are crucial to creating positive, systemic change within STEM, academia and at ASU.

“We are grateful to all of our esteemed guests for sharing their thoughts and expertise,” Gonzales said. “I am hopeful that as we continue these important discussions, members of our community who are watching will feel empowered to be agents of change, working together to create inclusive environments for women, women of color and other previously excluded groups in STEM."