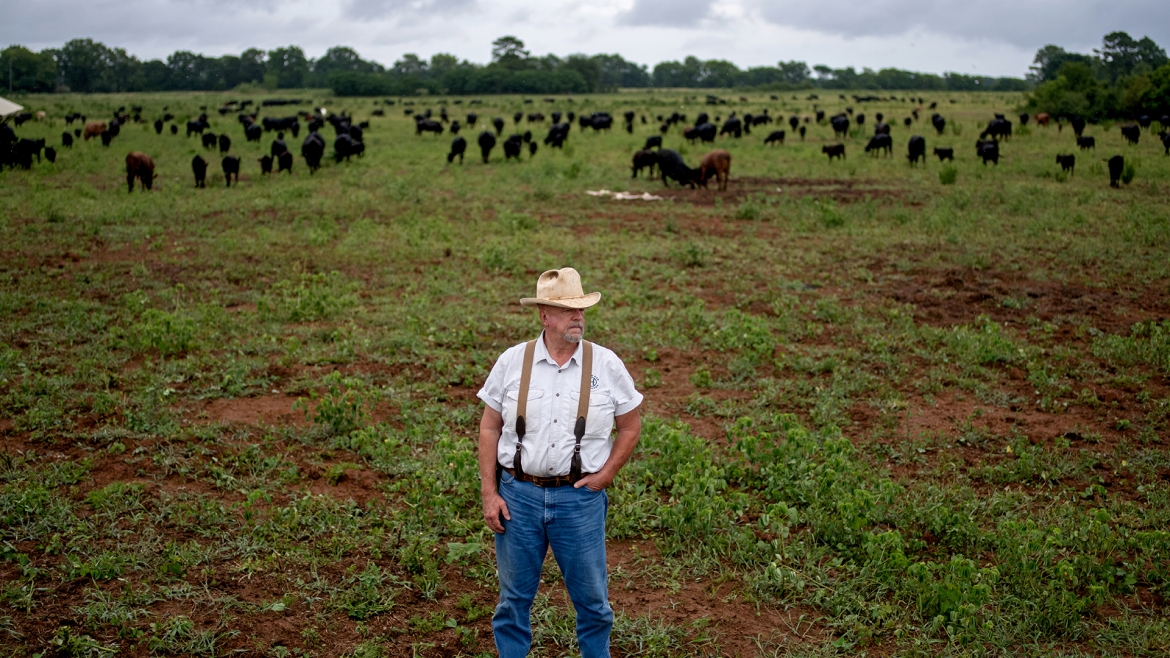 An adjustment to grazing patterns can provide huge returns, both to farmers and the environment, says ASU documentarian

If there were ways to produce food with improved environmental outcomes, it would be worth doing everything possible, from education to incentives, to help farmers adopt the methods.

That’s the aim of Peter Byck, professor of practice in the College of Global Futures’ School of Sustainability. An award-winning documentary filmmaker, Byck joined the faculty in 2013 after his climate change solutions film “Carbon Nation” caught the school’s attention. With a dual appointment in the Walter Cronkite School of Journalism and Mass Communication, he teaches students to make short documentaries about sustainability.

As Byck showed “Carbon Nation” around the world over the years, one aspect of climate change that people wanted to talk about again and again was soil health. Many agricultural practices damage soil and release stored carbon, but evidence suggests that alternative practices, broadly known as regenerative agriculture, can repair and sequester carbon. A strong scientific consensus has emerged that not only must new emissions be curtailed, but current concentrations should be stored underground, where it can’t warm the climate or damage ocean habitats.

With a grant from the Rob and Melani Walton Sustainability Solutions Service at ASU, Byck brought together scientists to design a research project to compare adaptive multi-paddock grazing with conventional methods. He has since produced 10 short films on AMP grazing, collectively called “Carbon Cowboys.”

Even as the goal was initially to help solve climate change, Byck said, “We think we’ve found a way to increase ranchers’ profitability.” That was key to getting stakeholder participation in parts of the country that have not been receptive to global warming messaging. “When we talk to farmers, it’s, ‘We’ll show you the data and you can ask any question. And the science will guide us.’”

For tens of thousands of years, as many as 50 million bison roamed the Great Plains. Herds would graze a small area, move on to a neighboring or nearby pasture and repeat — sometimes not returning to the same grasses for months or years. Their hooves trampled grass, helping the soil hold water by protecting it from evaporation while keeping the ground cool and providing habitat for other animals. Bison also kicked up dirt, loosening seeds and enabling them to germinate. Their excrement fertilized soil. And their continual departure to new pastures gave land time to recover. There’s evidence from researchers in Yellowstone National Park that bison in the wild still naturally graze in a way that provides these benefits.

Livestock have since overwhelmingly replaced the bison, but cattle typically aren’t managed in a way that’s healthy for the soil, leading to overgrazing and putting the Great Plains at high risk for desertification.

Conversely, AMP grazing mimics bison’s activity to improve soil health. Ecosystems evolve in response to the conditions they are exposed to, and when something closer to the historical norm is recreated through regenerative grazing, the soil provides more, and more diverse, forage. More forage allows the soil to sequester more carbon, while retaining more water and preventing pollutants from leeching into water supplies and aquatic habitat. Biodiversity also reduces topsoil erosion. The bison did it all without conventional ranching’s chemical fertilizer, pesticides, irrigation or antibiotics.

The solution Williams arrived at, and which he has since taught to thousands of ranchers who together manage more than 1 million acres, is AMP grazing. Ranches are divided into small paddocks, some as small as a half-acre. Cattle are packed densely into one paddock at a time and allowed to graze intensively. At least once a day they are sent into a new field, and the process repeats.

On an AMP ranch of 5,000 acres, a paddock might see fewer than 35 days of grazing over a dozen years. The rest of the time, it’s growing back. Plant species that take longer to grow get a chance; some of these may be more drought-tolerant. Some are legumes, which fix nitrogen in the soil, reducing the need for fertilizer. And, says Williams, “Soil that functions properly, that has high microbial or biological activity, confers a much higher level of disease and pest resistance.” This results in less need for chemical pollutants like pesticides and fungicides.

“Why do I want to spend thousands of dollars on synthetic fertilizer when I can grow these crops for the cost of the seed, and they’ll make nitrogen for me, and livestock will come around and eat these plants and convert it to dollars?” said North Dakota rancher Gabe Brown in “Soil Carbon Cowboys.”

With Earth’s population estimated to exceed 9.5 billion by 2050, the need to keep warming below a certain level to preserve a livable world and to feed people without increasing greenhouse gas emissions will be crucial. The Food and Agriculture Organization of the United Nations says that livestock are responsible for almost 15% of humanity’s carbon output, with beef cattle accounting for 42% of that amount.

“If you change about 25% of American land that’s in grazing right now, with that 3 tons per hectare per year, you draw down a billion tons of carbon dioxide annually,” Byck said. That’s about a fifth of total U.S. carbon dioxide emissions. “If all U.S. farmers change to this method of grazing, it can make a huge impact.”

That might be one reason companies like agribusiness giant Cargill are interested. In September, it joined with the World Wildlife Fund and other companies to collectively provide $6 million to train ranchers in more-sustainable grazing practices. It’s also one reason McDonald’s is the largest funder of Byck’s research project.

Byck says the company has realized “their supply chain is not resilient when you’re dealing with climate change, and degraded, unhealthy soils. We’re not afraid of working with big companies — I like to figure out ways to use these giant levers to get change.” The films, in turn, serve as a way to raise money for more research from companies with a stake in ranching, carbon mitigation or both.

“It works every time, in every environment, on every continent, and in every climate. I’ve never seen anything that has this type of impact.”

The films also draw funding from individuals. Helping to fund the project are ASU supporters Don and Bill Budinger, founders of the Rodel Foundation of Arizona; longtime supporters of Byck’s work, Paula and Jim Crown; and Byck’s friend from childhood, Stuart Brown, and his wife, Joanna.

A question from critics of AMP is whether the practice helps reduce methane, which is 25 times more potent than CO2 as a greenhouse gas; half of cattle’s greenhouse gas emissions come from the methane cattle burp out, according to the FAO. But then, maybe regenerative grazing doesn’t have to solve for methane, as certain supplements may reduce cattle’s methane emissions.

AMP grazing seeks to improve degraded soil, not convert forests or wild grasslands to rangeland. These natural areas are absorbing carbon — with each 120-year-old forest sequestering about 4 tons per hectare per year and undisturbed grasslands and riparian areas perhaps sequestering even more — and so need to be left undisturbed so they can keep on doing that, while also providing critical habitats for thousands of species.

Byck is excited for the beneficial changes AMP is having and is leading a research project involving eight universities comparing AMP with conventional grazing. “We saw the farmers practicing AMP having tremendous successes, but there was very little in the scientific literature on AMP grazing. So with the support of McDonald’s, Foundation for Food and Agricultural Research, ExxonMobil, Wrangler, Timberland and Cargill, our research began in 2018, and we will begin submitting manuscripts for peer-review in 2021.” Byck is also producing a new documentary on this research.

Mississippi rancher-scientist Allen Williams said, “If the principles of soil health and the rules of adaptive stewardship are implemented, it works every time, in every environment, on every continent, and in every climate. I’ve never seen anything that has this type of impact.”

Top photo: Will Harris, a fourth-generation cattleman, practices adaptive multi-paddock grazing at White Oak Pastures in Bluffton, Georgia. Regenerative farming methods like AMP are ranked No. 9 on a list of the 80 most effective ways to counteract methane emissions and sequester carbon by Project Drawdown, a nonprofit coalition identifying ways to fight climate change.

Because of you, a future full of promise: Explore how ASU supporters’ generosity during Campaign ASU 2020 has powered many breakthroughs and successes, and laid the groundwork for a future full of possibilities.

Editor's note: This story originally appeared in the winter 2021 issue of ASU Thrive magazine.Written by May Busch, a former COO of Morgan Stanley Europe who is now an executive coach, speaker, adviser, author and executive-in-residence in ASU’s Office of the President. Find her at maybusch.com/asuthrive.How has the new year started out for you? Whether you’re off to a roaring start, feel... 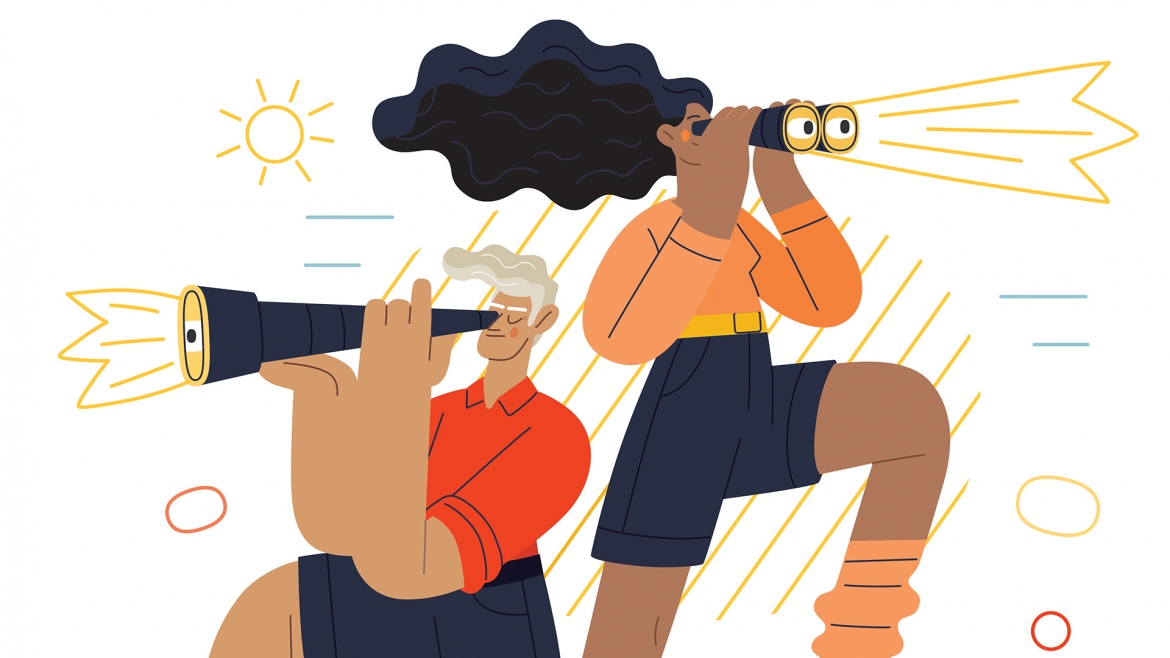 Written by May Busch, a former COO of Morgan Stanley Europe who is now an executive coach, speaker, adviser, author and executive-in-residence in ASU’s Office of the President. Find her at maybusch.com/asuthrive.

How has the new year started out for you? Whether you’re off to a roaring start, feeling underwhelmed, or something in between, this is a natural time to do some thinking and planning for the year ahead. And as my father says, “Chance favors the prepared mind.”

Here are four things you can do to get your career off to a great start. 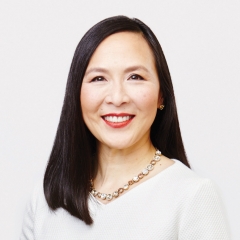 1. Choose your theme for the year

This can be an overarching theme that will guide you through the year. For example, it could be “the year of the promotion” or “the year of getting your degree.” Or you can choose a set of words or phrases that really embody the intention you want to live out, such as, “Let’s make everything simple, easy and fun this year.”

In my case, I’m going to choose growth as my theme, both as it applies to my business and to my personal development. How about you? What possible themes are you considering? As someone who’s attracted to taking on “shiny new opportunities,” this will be a challenge, but I know it will guide me in the right direction, and I can’t wait to tackle it.

2. Identify the three big wins you want this year

Predetermine and preselect three big wins that you want to have this year. For example, they could be landing two new clients, passing an exam (e.g., the CFA or CPA exams) and getting over your fear of speaking up in meetings. So, think about what your three big wins could be. It’s a more energizing way of asking yourself, “What are my main goals for the year?”

3. Decide what investment you’re going to make in yourself

Think about which exact things you’re going to spend your time, energy, mindspace and money on this year to build your foundation and make you even better in new dimensions.

For me, I’m going to reinvest in the mastermind groups that I’m part of, because I now realize how foundational they are to my current and future success. What are your investments going to be?

There’s a special fourth item that will be available soon to help you get your career off to a great start. It’s my annual online Career Mastery Kickstart Virtual Summit, featuring 25 incredible experts from around the world sharing their latest insights and advice on how to be more successful in your career.

This is all about you and your career, so I can’t wait to share it with you.