As an environmental anthropologist, Shauna BurnSilver is concerned with people’s relationships with their environment, how these relationships are changing, and what this means for vulnerability and well-being. She joined Arizona State University’s faculty last year and has already earned accolades for her research. Most recently, one of her research collaborations was recognized by the Ecological Society of America with a Sustainability Science Award.

The awarded research developed out of many discussions BurnSilver had with her fellow researchers and community collaborators about how to do better science. They wanted to implement a new collaborative method that could help alleviate poverty and support sustainable livelihoods and conservation in East African pastoral regions. 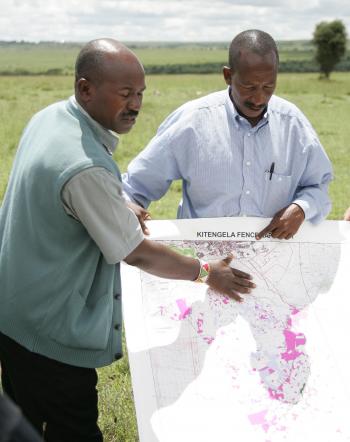 “As somebody who really cares about outcomes in terms of poverty and well-being – you can’t help but begin to really think about what your research means and how it is used,” says BurnSilver, a senior sustainability scientist in the Global Institute of Sustainability and faculty member in the School of Human Evolution and Social Change.

As part of her doctoral dissertation, BurnSilver traveled to Kenya to study the Maasai people. She was part of an interdisciplinary team from Colorado State University that looked at tradeoffs between the well-being of Maasai pastoralists, livestock and wildlife populations, and ecosystem health.

A new research to action model

After completing her dissertation, BurnSilver continued to work with other scientists in Kenya who brought decades of experience to their own research projects, but who felt a lingering sense of dissatisfaction with extractive models of research that narrowly focused on scientific outcomes. BurnSilver joined researchers from the International Livestock Research Institute (ILRI) in Kenya, Colorado State University, the University of Colorado, and Harvard University in developing a new model for collaborative research. From that experience, came the Ecological Society of America-awarded paper, “Evolution of models to support community and policy action with science: Balancing pastoral livelihoods and wildlife conservation in savannas of East Africa,” published in the Proceedings of the National Academy of Sciences in 2009.

The authors describe a new “research to action” model that was centered on the role of “boundary-spanning individuals.” These boundary-spanners were skilled Maasai community members and institutional facilitators who bridged gaps between local pastoralists, researchers, and policymakers, and forged linkages of experience across local, regional, and international scales.

“The science that emerges from this model of research is better science,” says BurnSilver. “For example, at the local level, you’re no longer just documenting traditional knowledge – what you’re creating is a hybrid of scientific and local knowledge that is highly relevant to community and policymaker needs and addresses critical scientific questions. Engaging people at the local level changes the way the science is done. It is a co-production of knowledge that takes place through time.”

In the past, many scientific researchers took an extractive approach. Scientists worked with local people, asked questions and collected data, and then returned home to publish their findings. Many never returned to their study sites to explain the results to the local inhabitants.

“Now, the people we worked with, the Maasai, are very aware that scientists come and go and make their careers on the information that’s extracted from working with them,” says BurnSilver. “One of the explicit components of this new research model assumes that this is no longer appropriate – that collaborative research simultaneously supports exemplary and innovative science, and jumps the boundary between research and action.”

Looking at the paper’s author list, you will notice almost half are Maasai. BurnSilver says this is a reflection of the critical role these boundary-spanning individuals played in creating and applying the model itself.

But putting the collaborative model in place was not automatic. Researchers took months to build and solidify relationships with local communities. It took time for Maasai community facilitators to engage local pastoralists in identifying key livelihood and conservation questions. A Maasai policy facilitator worked hard to link policymakers with research institutions. A high level of trust was established before researchers collected any data. In turn, these high levels of trust promoted engagement by the pastoralists. In the end, the International Livestock Research Institute promoted innovative research approach. All these components were key to the model’s success in the field.

“Ultimately, you know that the questions you are pursuing are directly relevant to people on the ground,” says BurnSilver. “You have incredible buy-in from people at the local level so the quality of the data you are collecting is better. By the end of this process, researchers had local pastoralists specifying their needs for particular kinds of scientific information – and this was a new and very welcomed dynamic. ”

One of the most important aims of the research was to create a model that would continue past the life of the project based on the local and global relationships among the Maasai community, research institutions, and policymakers. Additionally, the researchers suggest that the model could be applied to any type of research.

“I would argue this research to action model can be applied to any research project where scientists, policymakers, and local people are actively interested in thinking through complex questions, and making their results matter to people on the ground,” says BurnSilver.

It was because of this creation of a new collaborative research model that BurnSilver and her fellow researchers were given the Ecological Society of America’s Sustainability Science Award. The award is given to the authors of a scholarly work that combines social and natural sciences to achieve regional, ecological, and cultural sustainability.

“The award is very nice validation of the work that has been done,” says BurnSilver. “It gives greater visibility to a side of science that is important but isn’t often recognized. The new model is an invisible process that was made visible, based on this award.”

When asked what the advantages are to using this model, BurnSilver replied, “The collaborative process becomes an end in itself – it is so much more rewarding, and I believe it will get us closer to sustainable livelihoods for people and landscapes.”

Award-winning sportscaster Bob Costas praised the "timeless virtues" exemplified by Walter Cronkite as he accepted the 2012 Walter Cronkite Award for Excellence in Journalism at ASU on Oct. 30.

“Even … if the means of communication changes, what matters is the quality of the presentation and the reliability of the information,” he said. 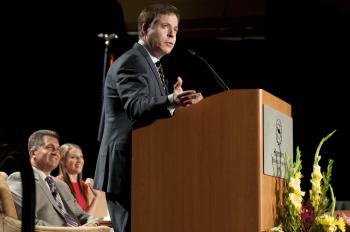 Christopher Callahan, dean of the Walter Cronkite School of Journalism and Mass Communication, presented Costas with the 29th annual award, given each year by the school to recognize a distinguished journalist who embodies the values of the school’s namesake – excellence, integrity, accuracy, fairness and objectivity.

“Walter started his career as a sportscaster, and he was a tremendous admirer of Bob’s work,” Callahan said. “Bob has set the standard for sports broadcasting, and he truly inspired our students during his visit to Walter’s school.”

At the luncheon, Costas encouraged students to hold fast to the standards set by Cronkite.

“The dedication to truth, to fairness, to quality – that’s what Walter Cronkite was about, (and) that’s what I hope the young people in this room and at this university are taking to heart,” he said.

Costas, who interviewed Walter Cronkite on his late-night interview program “Later with Bob Costas,” said it was “exciting and tremendously humbling” to receive recognition that bears Cronkite’s name.

“This is an honor that is hard to understate,” Costas said. “Everyone in broadcasting reveres Walter Cronkite.”

Prior to the luncheon, Cronkite students gathered in the school’s First Amendment Forum for a question-and-answer session with Costas hosted by Associate Professor Joseph Russomanno.

Costas advised students to distinguish themselves as journalists by taking advantage of every opportunity to develop their craft.

“Good work is what’s going to set you apart,” he said. “Be willing to go to the 126th (media) market just to learn your craft and put another notch on your resume.

Costas, a 24-time Emmy Award winner, currently hosts NBC’s “Football Night in America” studio show. He also co-hosts NBC’s coverage of the U.S. Open, Kentucky Derby and Preakness Stakes and serves as primetime host of the network’s coverage of the Olympic Games. In addition, he is the host of MLB Network’s “Studio 42 with Bob Costas” and serves as lead play-by-play announcer for the network’s “Thursday Night Baseball” games.

He has been honored a record eight times as “Sportscaster of the Year” by the National Sportswriters and Sportscasters Association and was inducted into the organization’s Hall of Fame in June of this year.