Sun Devil startup in final round of Inc. Magazine contest

“I love playing music for others and entertaining people,” said Will Curran, who proudly wears a neon green T-shirt with his company name, Arizona Pro DJs, across the front. (The company's name has since been changed to Endless Entertainment.) 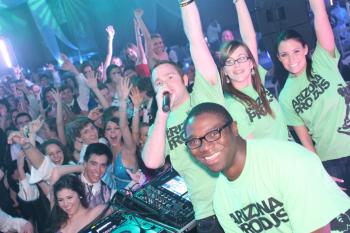 Now a senior at Arizona State University, Curran first began the special events business during his freshman year of high school after learning to spin via a “DJ in a Box Kit.” From there, Curran went from playing for his friends in his bedroom to DJing at local birthday parties.

“Looking back I don’t know how I made it work with that kit,” Curran said. “I was really hesitant to begin DJing. Because I was known for my electronic music, I didn’t know any of the top 40 hits.”

To counteract this problem, Curran had a friend tag along and instruct him on which records to play. Eventually, he started studying the mainstream scene and could stand on his own. Curran also used the money he earned to buy better gear for his productions.

It was at this point that he realized his passion for music was becoming his profession. Curran knew that in order to be taken seriously he would need three essential items: a website, business cards, and, of course, a company name. He decided on Arizona Pro DJs because it was simple and straight to the point.

“We are now a full-scale event business focusing on teen events. We offer entertainment, production and even the planning of parties,” Curran said. “My goal is always to bring a club atmosphere to dances, complete with lights, lasers, floor setups, a DJ booth, etc.”

His hard work has not gone unnoticed either. The Arizona Republic named Curran among the top 35 entrepreneurs under 35, and, in 2011, the Social Media Examiner ranked Arizona Pro DJs in the top five for small business Facebook pages in the world.

Recently, the company made the finals for Inc. Magazine’s “America’s Coolest College Start-Ups” contest. The contest runs until March 30, wherein the company with the most votes from the public will be named the winner, and receive a trip to the Inc Magazine leadership summit in Miami, Fla.

For his fellow entrepreneurs just starting out, Curran is never speechless for words of advice.

“If you have an idea, just do it. Even if someone has a similar business idea, you will win by doing it bigger and better then them,” Curran said. “It’s also really important to surround yourself the best people and never give up.”

Alumni Association to celebrate staff, faculty with U Devils events

The Arizona State University Alumni Association will host nine events over a four-week period in March and April to recognize members of its U Devils group.

Alumni Association to celebrate staff, faculty with U Devils events

Some organizations may celebrate their employees with a special day or week, but the Arizona State University Alumni Association will host nine events over a four-week period to recognize members of its U Devils group, which is comprised of all ASU faculty and staff members who are also members of the Alumni Association.

The group has enjoyed steady growth since its formation in 2007, and is one of the association’s greatest success stories in the membership acquisition area, according to Christine Wilkinson, Alumni Association president. 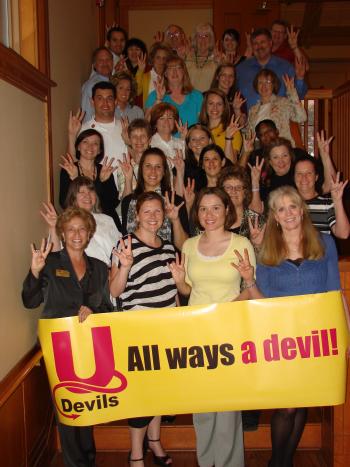 “We created the U Devils to celebrate and engage our faculty and staff,” she said. “Every spring, we host events that recognize this group of Sun Devils, who are so critical to the success of ASU’s mission and such a foundational part of the Alumni Association.”

This year, the calendar of appreciation events will stretch from the end of March through mid-April. Festivities kick off with a mixer from 4:30 to 6 p.m., March 26, in Carson Ballroom in Old Main. Current U Devils members may attend at no charge and are encouraged to bring their fellow colleagues. Light appetizers, beer, wine and soft drinks will be available, and attendees may participate in a prize giveaway. Participants must RSVP by March 23.

During the year, U Devils connect frequently with each other on the group’s Facebook page, and that social media platform will be the site of an online photo hunt contest, which will begin at 10 a.m., April 4. Potential contestants can visit the page at http://www.facebook.com/groups/143941132533.

On April 13, the “Lucky U Devils Day,” an email prize drawing contest, will be held.  U Devils will also welcome staff at the All-Staff BBQs on the Polytechnic and Tempe campuses, to be held on April 9 and April 17, respectively. Current U Devils at the West campus will be treated to a “lunch bunch” gathering on April 16, and U Devils at the Downtown Phoenix will celebrate with a happy-hour event on April 17.

The appreciation calendar wraps up with an invitation for U Devils to attend a Maroon & Gold Professionals networking mixer from 5:30 to 7 p.m., April 18. U Devils members can attend the mixer at no cost; the event is $10 for prospective members.

A major feature of the U Devils month is the encouragement of employee-to-employee recruitment. U Devils members who recruit two or more new members during the 2012 appreciation period will receive their choice of a free Sparky skin for their mobile phone or laptop, or a limited-edition U Devils polo shirt. They and their recruits also will be invited to a special invitation-only tea at the University Club on April 19.

To join the Alumni Association at the special employee rate ($25 annual/$300 life) and participate in the U Devils events, ASU faculty and staff may download a membership form at http://alumni.asu.edu/emails/udevils/Faculty_staff_form071211.pdf. Employees may use payroll deduction to pay for their life membership over the course of one year.

For more information on the U Devils group, or RSVP for a U Devils event, visit http://alumni.asu.edu/groups/faculty-staff.