Now, the 18-year-old rock climber is the subject of a recent Q & A feature in Teen Vogue that was featured in The Huffington Post. The Sun Devil says she was introduced to the sport at her family's local shopping mall.

"There's an outdoor mall that's pretty close to my house and there's a climbing wall there. I'd try to drag my parents there every day because I thought it was so much fun," Blair-Coyle tells Teen Vogue writer Sierra Tishgart. "From there, I joined a climbing team and started training and competing." She has participated in more than 100 competitions.

"I think when I was about twelve, I realized I wanted to do this on the national level," she says.

Hoping that rock climbing will become an official Olympic event by 2020, she says right now her focus is on balancing college and climbing.

"It's really important to have a degree," says Blair-Coyle, who was admitted to ASU on a scholarship. "I'm going to climb forever, but just in case it doesn't work out, or if I get injured or something, I'm going to need something else I can do."

An ASU team is in the running for a national student entrepreneurship award.

A team of recent Arizona State University graduates and current students is among finalists for Entrepreneur Magazine’s 2012 College Entrepreneur of the Year Award. 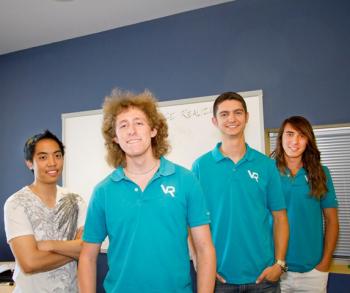 The start-up venture has already earned the support of ASU Edson Student Entrepreneur Initiative, and last year finished second in the ASU Innovation Challenge in which student entrepreneurial projects compete for support.

The co-founders of Vantage Realized are Gordon Freirich, who earned a degree in mechanical engineering from ASU’s Ira A. Fulton School of Engineering, JJ Tang, a finance graduate of ASU’s W. P. Carey School of Business, and Nick Gough, an industrial design major in the university’s Herberger Institute of Design and the Arts.

Vantage Realized is refining a method of propelling wheelchairs with the use of levers that produces less stress on the joints of users, who often develop infirmities such as carpal tunnel syndrome and rotator cuff injuries due to the physical strenuousness of using conventional manual wheelchairs.

During the past summer the team built a prototype and worked with long-term wheelchair users to test its effectiveness.

“We performed research to confirm that a lever system was physically better for the body,” says team member Ho.

“Right now we are taking the feedback from our tests and developing a production-viable product,” Gyllenhaal says.

The next step is to refine the product and develop a manufacturing plan to either sell the parts of the wheelchair separately or to partner with a company to develop wheelchairs with the parts as factory add-ons.

Vantage Realized is one of five teams vying for the Entrepreneur Magazine Award. A winner is to be announced in January and will be featured in an issue of the magazine.

“We are confident in our project because it has a social value. It is not purely for profit,” Freirich says.

“It’s always nice to win competitions, but it is not the bigger picture. We are much more concerned about what we actually achieve,” he says.

The supportive environment of the Edson Initiative operations at SkySong, the ASU Innovation Center in Scottsdale, has helped boost Vantage Realized, Freirich says.

“When you first get into the program the money seems really important, but the real benefits are the resources – the mentorship and the connections you make at SkySong,” he says.

“It is a very open community. The other start-up companies are happy to share their connections and resources. We all work together,” he says.

Read more about Vantage Realized, the College Entrepreneur of the Year Award and the Edson Student Entrepreneur Initiative.