Growing up in Phoenix, sustainability and Spanish literature senior Kim Pearson was first introduced to the basics of sustainability through class projects on issues such as deforestation.

“I first heard the term, ‘sustainability’ when watching a documentary and I thought, ‘Now I can give a name to what I've been interested in all these years,’” she says. 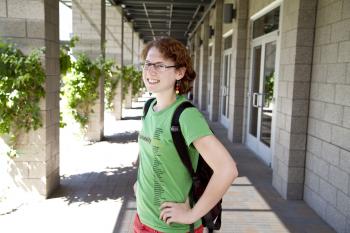 Pearson is graduating from the School of Sustainability with an emphasis in sustainable economics because she wants to understand the economic policies behind agriculture and trade.

“I have been interested in sustainability concepts since elementary school, as I began to learn about environmental issues and their relation to human behavior, politics and economics,” Pearson says.

As a student, Pearson was the president of United Students for Fair Trade at ASU and coordinated on-campus education programs about fair trade policies and methods as well as advocacy efforts.

“I was introduced to trade issues in high school through anthropology class,” says Pearson. During her freshman year of college, she applied to be a volunteer with Las Otras Hermanas, a Phoenix nonprofit that collaborated with a Mexican women’s cooperative on a sustainable clothing line to be sold in the United States.

As a volunteer translator, Pearson visited Juárez, Mexico for Las Otras Hermanas, where she “was inspired by the strength of these women and their determination to make their community better.” Because of the work provided through the cooperative, the women were able to send their children to school and provide them with educational necessities such as books.

Back in Arizona, Pearson focused on creating a better community on and off campus. As the student events coordinator at the Global Institute of Sustainability, she helped organize ASU’s No Impact Week 2011 and this year’s Sustain[ability] Challenge Week. She also implemented original events such as this year’s Phoenix Urban Dynamics Tour, a light rail tour that featured sustainability scientists sharing Phoenix’s development history.

Pearson got to combine her love of food with her passion for sustainability as a coordinator for Real Food ASU. She says she helped students “reconnect to the food system and make sustainable food choices.” For fun, she likes to organize cooking workshops at Plan Milpa, an urban garden in Phoenix.

Not one to sit still, Pearson’s leadership roles allow her to impassion others and realize her future. She recently completed a documentary on Phoenix’s Sky Harbor Neighborhood Association and its history of community action in producing local public goods such as green space and walkable streets. After graduation, Pearson will be an intern with the Arizona State Senate, researching and presenting bills to legislators.

“My experiences at ASU have inspired me to pursue a future dedicated to public service, and I look forward to gaining insight into the political process while at the Senate.”

Tim Exposito's passion for sustainability steered him toward ASU's School of Sustainability.

Tim Exposito’s interest in construction is nothing new. At 16, he helped his brother build a house. In high school, he worked at a cousin’s construction business. During his high school senior year, Exposito spent his mornings at a construction site and his afternoons in the classroom.

His passion for sustainability has always been there, too. 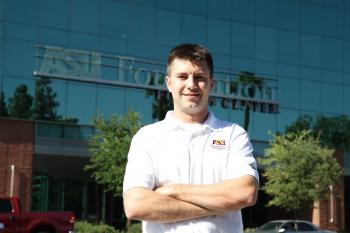 “I’ve always written papers about recycling, impacts and implications,” Exposito says. “Sustainability has always been a fascination of mine. It’s always been a goal of mine to reuse something instead of throwing it away. I do this in construction and everyday as much as possible.”

Originally from Michigan, Exposito earned his associate’s degree in architecture and construction technology before moving to Arizona in 2011. While researching sustainability, Exposito stumbled upon Arizona State University’s School of Sustainability.

“There was so much information on sustainability that I continued to look into it,” he says. “It sparked a fascination and I came across ASU’s program.”

Now, Exposito gets to combine construction and sustainability in his career.

“Sustainability can be applied to anything you want to apply it to – construction, education, life in general,” he says. “It’s tough to put a specific definition to it.”

While a student, Exposito immersed himself in several campus construction and sustainability initiatives. As part of the Engineering Projects in Community Service (EPICS) program, a social entrepreneurship class, he helped build a “cabin of the future” for a camp in Prescott and promoted digital literacy in education at a school in rural Mexico.

“In the EPICS program, we tackled real-world problems and made the world better for those who can’t make it better for themselves,” he says.

Exposito has some advice for new sustainability students: be open-minded and take a holistic approach to problem-solving.

“Hard work pays off and I think it is beneficial to show other sustainability students what can be achieved throughout the university if you apply yourself,” he says. “There are a lot of opportunities available through sustainability education.”