As an immigrant from Vietnam, Thuynga Barr, a senior in the School of Social Transformation at Arizona State University, knows all too well about the struggle to become a United States citizen.

She came to the U.S. after her brother established himself as a citizen, and from there was put through hours of phone calls and waiting in line to get the proper documentation. Barr was also tasked with overcoming a language barrier since she did not know English at the time. 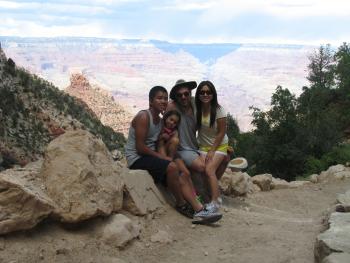 Preparatory courses soon helped Barr grasp the language, but the experience resonated with her. She knew in the back of her mind that one day she wanted to help those who were going through the same thing.

After moving from Nevada to Oregon, she began working with semiconductor circuits as an engineer for a local company. A business merge was the perfect opportunity for Barr to relocate to Arizona. In 2008 the economic crash caused Barr to reevaluate her career ambitions. Although excelling at her work, she says that the engineering field was not her passion.

“It was my chance to go and do something I’m really passionate about. I love public service and being able to help people, so I started doing research for college,” Barr said.

Barr, a first-generation college student, set her sights on a bachelor’s degree in justice studies from the School of Social Transformation in ASU's College of Liberal Arts and Sciences.

To gain hands-on experience, Barr interned with congressman Ed Pastor’s electoral campaign. She enjoyed the experience so much that in May 2012 she began volunteering with congresswoman Kyrsten Sinema.

“I did some research on her and realized that if I wanted to make a change on a local level, this was my opportunity,” Barr said.

Of her work, Barr said she enjoyed working with fellow volunteers who shared a passion for change and building relationships with community members.

“When you talk to people on the phone they tell you their struggle. You find out we all struggle with the same things,” she said.

To further broaden her horizon on the political spectrum, Barr volunteered with Mi Familia Vota, a nonprofit organization that works to increase civic engagement in Latino, immigrant and allied communities. The group offers free workshops and counseling services for those who wish to learn about the voting process and become a U. S. citizen.

Barr says that the experience only furthered her passion for working with those seeking citizenship. It also made her form new opinions on how to better the immigration process, which she says is something she would like to work on full time in the future with the Department of Homeland Security.

In the meantime, the senior will be graduating this fall and is a proud recipient of the School of Social Transformation Dean’s Medal. She says that above all, she will miss the conversations with her professors and classroom debates with peers.

Glendon and Kathryn Swarthout's legacy to ASU is one of the top five student creative writing honors in America.

The importance of the Swarthout Awards in Writing at Arizona State University can be told in a number of ways.

As a screenplay – Time: present; setting: a celebratory reception. A crowd congratulates the winners, male and female graduate and undergraduate students, as they receive their generous prizes at this 50th anniversary event. Flashback to 1948: An aspiring writer named Glendon Swarthout, a World War II veteran attending the University of Michigan, is named winner of another major writing scholarship, the Hopwood Award. In his mind is planted a seed that he might someday be able to help other young writers. 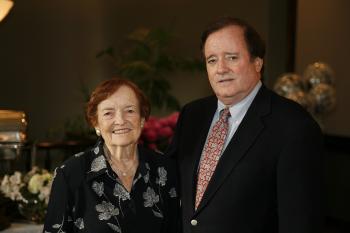 As a biography – The influence and impact of Glendon and Kathryn Swarthout’s foresighted contribution cannot be overstated. Interviews would document the hundreds of lives changed and careers made possible by the philanthropy of the Swarthout family; careers that have, in turn, touched untold thousands of readers.

As a novel – Perhaps the most appropriate vehicle for the story of the creation and impact of the Swarthout Awards is to set it the way the late Glendon Swarthout might have, in his medium of choice. He authored 16 novels, two of which were Pulitzer Prize nominees. Six others were made into influential films, including “Bless the Beast and Children,” “The Shootist” and “Where the Boys Are.” Like his own works, Swarthout’s award-story-as-novel would have a strong theme, touches of humor and unforgettable characters.

That story began when Swarthout and Kathryn Vaughn dated as undergraduates at the University of Michigan. They married after graduation, and he returned to that university after the war for a master’s degree. It was then he won the Avery Hopwood and Jule Hopwood Creative Writing Award, and the idea for the Swarthout Awards in Writing began to take shape. “At that time the Hopwood prize was $800,” recalls Kathryn Swarthout. Avery Hopwood, a jazz-age Broadway playwright and Michigan alumnus, left the majority of his estate to the university to support and encourage young writers. “That award really made a difference for us,” Kathryn says. “We were poor graduate students. Glendon was overwhelmed – and humbled – to win it.”

In 1959 Swarthout took a position teaching English at ASU, shortly after he and Kathryn celebrated the Hollywood sale of his western novel, “They Came to Cordura.” That sale and the success of the resulting film, starring Gary Cooper and Rita Hayworth, meant his dream of supporting young writers could finally become reality in 1962.

That reality, Kathryn Swarthout admits, didn’t quite live up to his vision, at least in the beginning. “That first prize was $50,” she says, “and it was awarded to a middle-aged gentleman who wrote a short story. At the reception, pink punch was served. Glendon and I didn’t go to the ceremony. Our good friend, Ernestine Gilbreth Carey (co-author of “Cheaper by the Dozen”) was the moderator of the evening event, and afterward she encouraged us to become more involved in the entire process.”

The couple took her advice, and their annual involvement and continued dedication have made the Swarthout Awards in Writing at ASU one of the top five creative writing prizes in America for students from undergraduate and graduate writing programs. Today, as on the day they were instituted, the Swarthout Awards reside in ASU’s Department of English, an academic unit of the College of Liberal Arts and Sciences. In the half century since the awards were established 400 ASU student writers have benefitted from hundreds of thousands of dollars of support.

One of those young writers was poet Robert E. Yen, a 1976 Swarthout winner, who recalls, “I was most grateful because the award told me there was value in words, value in ideas and value in what I was doing. That was a powerful message for a young person. It still is.”

Danielle Roderick, winner in 2001 and 2002 for her fiction, likewise credits the Swarthouts’ philanthropy and her prizes for bolstering her confidence in her work. “The Swarthouts had a major impact on my life. It was the first external reward that validated my writing, that told me I was on the right path; that said, yes, this.”

The pink punch is gone from the awards ceremony, replaced with assorted pastries and coffee, served beside fresh-cut flowers. The Swarthouts attended together each year until his death in 1992, and since then she represents them both.

During their years at University of Michigan Kathryn Swarthoutmajored in English and education, going on to become an elementary school teacher and tutor. In her parallel career as writer she co-authored novels for young readers with her husband. One of their collaborations, 1969’s “The Button Boat,” was named by The New York Times Review of Books as one of that year’s 20 best books for children. Kathryn Swarthout was a longtime columnist for Woman’s Day magazine and a noted poet. Today she stays busy with membership in writing alliances, including the Western Writers of America, an organization the family has been very involved in over the years, and in her book club.

The Swarthout’s son, Miles, is himself a successful writer, particularly of screenplays. His adaptation of his father’s novel “The Shootist,” which would become John Wayne’s last film, was nominated for a Writers Guild award. In addition to his work as a journalist and columnist, Miles Swarthout has rekindled interest in the novels his parents co-wrote by publishing them as e-books. He is actively involved in the Swarthout Awards at ASU, and committed to continuing his family’s involvement into another generation.

If the story of the Swarthout’s support for ASU were a novel, it would not have one thing all of Glendon Swarthout’s works had: an ending. As their investment continues to encourage young writers at ASU, and as those writers touch the lives of countless readers, the Swarthout legacy will go on and on.

“The Swarthouts’ generosity is impactful on many levels,” says ASU Foundation CEO R.F. “Rick” Shangraw Jr. “Their philanthropy at this great university, and the support and encouragement they have provided our student writers over many years makes our community a better place to live; their contributions to ASU students improves the quality of work and improves the university’s reputation in advancing the humanities.”