Solid pitching from Hillary">http://thesundevils.cstv.com/sports/w-softbl/mtt/bach_hillary00.html">Hi... Bach and Mackenzie">http://thesundevils.cstv.com/sports/w-softbl/mtt/popescue_mackenzie00.ht... Popescue coupled with an ASU offense that outscored opponents 24-5 Thursday night gave the No. 7 Sun Devil Softball team two more wins as they topped Campbell 13-4(5) and FGCU 11-1 (5). Bach and Popescue took the wins on the night to move to 5-0 and 6-1 respectively as ASU improved to 21-1 overall.

Bach tightened it up as the offense let loose in the third plastering five more on the board with a three run longball from Katelyn">http://thesundevils.cstv.com/sports/w-softbl/mtt/boyd_katelyn00.html">Ka... Boyd leading the way for A State’s offensive melee. Campbell struck again though in the fourth with a two run shot to right center, but a five run bottom of the inning silenced any concerns for ASU as they rolled to a 13-4 win in five innings.

The Sun Devils came out for the nightcap against FGCU with similar fanfaronade as they rocketed to a four run first inning with a bases-clearing three RBI double from Krista">http://thesundevils.cstv.com/sports/w-softbl/mtt/donnenwirth_krista00.ht... Donnenwirth making the headlines. An explosion for seven runs awaited ASU in the second as well as nearly everyone swung the stick for a hit with Katelyn">http://thesundevils.cstv.com/sports/w-softbl/mtt/boyd_katelyn00.html">Ka... Boydsending her second home run of the day into orbit to make that eight four baggers on the season and push ASU’s lead to 11-0.

Popescue and her Sun Devils brought their d-faces to the game as well with only four hits and one run allowed on the Sun Devil defense as FGCU knocked a solo shot to right field in the third to plate their only run of the game and sealing ASU’s 21st win of 2011.

The Sun Devils will continue action in the Diamond Devil Invitational tomorrow as they face the Howard Bison at 7:30 p.m. in Tempe at Farrington Stadium.

Research findings suggest that human ancestral social structure may be the root of cumulative culture and cooperation and, ultimately, human uniqueness.

One of the most complex human mysteries involves how and why we became an outlier species in terms of biological success.


Research findings published in the March 11 edition of the journal Science by an international team of noted anthropologists, including several from Arizona State University, who study hunter-gatherer societies, are informing the issue by suggesting that human ancestral social structure may be the root of cumulative culture and cooperation and, ultimately, human uniqueness. 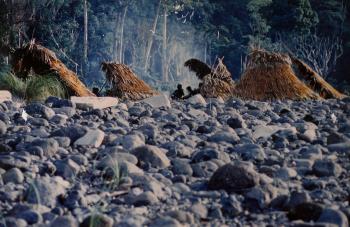 
Because humans lived as hunter-gatherers for 95 percent of their species’ history, current foraging societies provide the best window for viewing human social evolution, according to the authors. Given that, the researchers focused on co-residence patterns among more than 5,000 individuals from 32 present-day foraging societies around the globe, including the Gunwinggu, Labrador Inuit, Mbuti, Apache, Aka, Ache, Agta and Vedda. Their findings identify human hunter-gatherer group structure as unique among primates.


Their finding showed that across all groups, adult brothers and sisters frequently live together, making it common for male in-laws to co-reside. They also found that it was equally common for males or females to move from or remain with family units. This is in contrast to other primate species, where either males or females move to another group at puberty.


A major point in the study is that foraging bands contain several individuals completely unconnected by kinship or marriage ties, yet include males with a vested interest in the offspring of daughters, sisters and wives. This organization mitigates the group hostility frequently seen in other apes and also promotes interaction among residential groups, thereby leading to the development of a large social network.


“The increase in human network size over other primates may explain why humans evolved an emphasis on social learning that results in cultural transmission,” said Hill. “Likewise, the unique composition of human ancestral groups promotes cooperation among large groups of non-kin, something extremely rare in nature.”


The group’s findings appear in the paper “Co-Residence Patterns in Hunter-Gatherer Societies Show Unique Human Social Structure.” It is the first published analyses of adult co-residence patterns in hunter-gatherer societies based on census data rather than post-marital residence typologies, Hill noted.