School of Letters & Sciences Outstanding Graduate is a portrait of perseverance

Raquel Aviles once considered herself a long shot when it came to furthering her higher education, but the 40-year-old mother of three has beaten the odds and next week she’ll experience the big payoff.

“Completing my bachelor’s degree has been a long journey for me and I have changed in so many ways,” says Aviles, who has been named ASU’s School of Letters & Sciences Outstanding Graduate for spring 2014. “Many hours of precious time was given but certainly not wasted on my education. ASU has provided me with the opportunity to complete a goal that has been embedded in my heart for several years.” 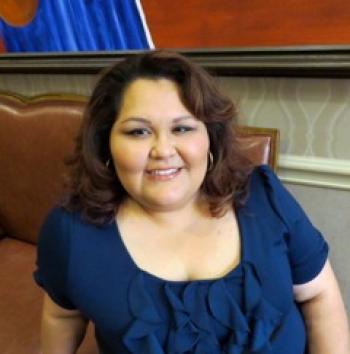 Aviles will graduate on May 14 with a 4.0 GPA and receive her Bachelor of Interdisciplinary Studies, concluding one chapter of an educational saga that has spanned almost two decades. Aviles attended the University of Arizona after high school graduation in 1992, but struggled academically and financially. She also worked full-time, which placed an additional burden on her time and priorities. Aviles dropped out in 1995, and the experience left her physically drained and emotionally sapped.

“I left the university with the feeling that the academic world was not for me,” Aviles said. “This was a painful decision felt that a college education was something I would never obtain.”

Aviles married in 1999 and started raising a family. She also worked for the Pascua Yaqui Tribe’s Health Department in Tucson, where Aviles quickly realized that she needed to complete her education in order to accomplish more for her tribe. She attended classes at Pima Community College after work, but the demands of Aviles’ job caused her to miss important lectures and her GPA to drop. She graduated with Associates of Arts degree in 2011, but it was a painful victory.

“I was very stressed and unhappy. I felt I could not fit both work and education into my life. School was also causing issues at home because I would get home late from class after working all day,” Aviles said. “My husband felt the burden of raising a family on his own. We both decided once I completed my A.A. degree, I needed to seek out other options.”

That other option came in the form of ASU’s online BIS program, which allowed Aviles to adjust her life and school schedule. She found the online courses more convenient but more self-driven.

“Procrastination is not an option online,” Aviles said, who studied at night and on weekends after her kids were fed and put to bed. “Lots of pre-planning and flexible scheduling allowed me to find balance in important areas of my life. I was able to commit to my work, my children’s activities and have time for my husband.”

Aviles admits she struggled in the beginning, but her ASU instructors would not allow her to fail or get discouraged. They made themselves available to her through emails, phone calls and video chats.

Aviles is keeping the momentum going with her education. Three days after she collects her bachelor’s degree, she will seek a Master in Health Innovation degree. She will, however, savor the moment.

“My children have seen their mother tired, working hard and caring about the work that needed to be completed,” Aviles said. “Next week they will see their mother graduate from ASU. ”

ASU Career Services is offering a summer career fair series of events for ASU students, recent graduates and alumni of all majors starting May 19.

ASU Career Services is offering a summer career fair series of events for ASU students, recent graduates and alumni of all majors on May 19, May 28, June 11 and July 21. Prospective employers from a variety of local, regional and national companies will be available to educate attendees about local job opportunities and recruit for full-time, part-time and internship positions.

"The summer career fair series is designed to connect job seekers with professional opportunities," said Elaine Stover, director of ASU Career Services. "This is an excellent opportunity for students to interact with local business managers and network with professionals in their chosen fields."

Attendees should bring a current resume, dress professionally and be prepared to network with prospective employers. See a list of attending employers and tips on preparing for a career fair.