After four years of winning research and academic awards, senior Ryan Muller is graduating with his dream in sight: pursuing synthetic biology as a graduate student. Muller is finishing his four years at Arizona State University with a double major in molecular bioscience and biotechnology, and medicinal biochemistry. Muller received offers from University of California Berkeley, as well as from Harvard – creating a difficult choice. But after spending a summer at Berkeley as a part of the Amgen Scholars research program, he said he felt the environment at Berkeley would be more productive to his success.

Coincidentally, a summer research program is what led Muller to ASU in the first place. During high school, he conducted research at the Biodesign Institute and realized ASU was the university for him.

“I saw all the really good research going on at ASU and wanted to be a part of it,” Muller said.

During his sophomore year, Muller joined the ASU International Genetically Engineered Machine (iGEM) team, which competes on a national level to create synthetic biological systems. In 2012, his team won a gold medal, as well as the Best Human Practices Advance award during the international championship

“Being on the iGEM team was very pivotal in cementing my belief that research is what I want to do and that I’m good at it,” Muller said. “There were a lot of late nights in the lab, but it showed me that no matter the challenge, I’m able to get through it.”

Muller said it often took more work than people realized. Citing one time when the team was lacking enough data for the project, he spent more than 70 hours in the lab with one other student to make up for the shortage – completing the task in addition to his other research and academic duties.

In 2014, Muller was one of 300 students nationwide who received a Goldwater Scholarship for his academic excellence. This year, he earned the School of Life Sciences Outstanding Graduate award, and the College of Liberal Arts and Sciences Dean’s medal for the Department of Chemistry and Biochemistry.

More than any other experience, Muller said he appreciates the way both the School of Life Sciences and the Department of Chemistry and Biochemistry supported his research efforts. In particular, a biosensor project that evolved from his experience on the iGEM team stood out in his mind.

“ASU was very willing to give me all the resources I needed, which was very exciting,” Muller said. “I was able to have my own independent ideas and develop projects purely from my mind into a physical entity.”

Graduating this May, Jaylee Conlin has earned bachelor's degrees in meteorology/climatology and computer science, and has won a national award for her presentation of her research.

Growing up in Glendale, Jaylee Conlin always loved hearing about extreme weather in places other than Arizona. 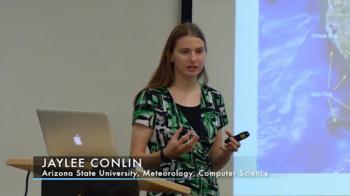 By the time she entered ASU as a freshman, Conlin had declared a major in geography with a concentration in meteorology and climatology – and soon after, thinking about increasing her employment opportunities, she declared a second major in computer science.

“At that point, they just seemed like two good majors – I had no idea how much weather forecasting and climate research rely on models that are built using programming and an understanding of computing principles,” Conlin said.

Five years later, Conlin is graduating with both degrees, having earned recognition at the national level for research she has carried out, and earning the Dean’s Medalist award for the School of Geographical Sciences and Urban Planning, as well as being selected as the outstanding graduate in the social sciences by the ASU Alumni Association.

As a freshman and sophomore, Conlin worked on courses in both her majors, and in her spare time represented ASU on the racquetball team – as a sophomore, playing in the National Intercollegiate Racquetball Championships.

By her third year at ASU, she had added a job as a language lab assistant to her list of activities. The following year, she took on a second job as a preceptor, assisting students with introductory physical geography coursework. At that point she gave up racquetball competition but continued to fulfill requirements for both majors, unfailingly earning top marks.

“The best thing about ASU,” Conlin said, “has been all the professors who taught really well, in ways that really challenged me.”

In spring of her junior year, Conlin decided to apply for the highly competitive NASA Student Airborne Research Program, a summer experience in which students develop and conduct individual research projects, mentored by NASA scientists and utilizing NASA’s airplane-based earth science instrumentation. She was one of 30 students selected out of a pool of applicants from all over the country and from disciplines spanning the physical sciences, natural sciences and engineering.

The program begins at NASA’s Armstrong Flight Research Center, north of Los Angeles in the California desert. There, Conlin chose to work with a group that focuses on understanding coastal and near-shore processes working with data from aircraft-borne earth-sensing instruments.

Continuing the program on the University of Irvine campus, Conlin was on a team of eight students researching coastal and near-shore processes. The team was led by by Raphael Kudela, professor of ocean sciences at the University of California Santa Cruz.

Each student develops his or her own research project, and Conlin was intrigued by a topic on which little work had been done: Microsystin, a toxin that’s produced by blue-green algae and sometimes contaminates fresh-water sources in Southern California, is a known health hazard.

Drinking microsystin-infested water has killed animals and caused serious diseases in humans. One researcher describes the toxin as potentially 12 times more deadly if inhaled rather than swallowed – but very little is known about the extent to which water-borne microsystin may enter the atmosphere.

With meteorology and climatology coursework providing a deep understanding of atmospheric processes, and her computer science providing programming and conceptual skills, Conlin set to work to begin to fill in the picture of whether microsystin in Southern California water bodies might be entering the atmosphere in concentrations that could be a health hazard.

“Jaylee did a fantastic job,” said Kudela, her scientist mentor. “She came into the program knowing essentially nothing about oceanography or limnology (the study of inland waters). In her time at [Student Airborne Research Program] Jaylee not only learned about harmful algal blooms, she learned how to process remote sensing data, and then went even further, learning to run atmospheric transport models.”

The first step was to identify areas with potential for high microcystin concentrations . For that phase, Conlin applied mathematical algorithms to data gathered from an Airborne Visible/Infrared Imaging Spectrometer – a device that measures radiation of energy from land and water surfaces in great detail. The next step was to assess the potential of the atmosphere to transport the toxin. To do this, Conlin drew on several mathematical estimating procedures and models.

The results were somewhat reassuring – the final model showed most of the area being studied to typically have only very low toxin levels.  However, as a worst-case scenario, she assessed the toxin levels based on the highest amount of recorded microcystin in a particularly infested water body, Pinto Lake.  Here, the model showed levels that could potentially present a health risk at some distance from the water body, if levels and exposure continued for some time.

“I hope this work leads to more investigation of microsystin in the atmosphere,” Conlin said.

“Jaylee built on some work from previous students but took it into a whole new direction. To my knowledge, Jaylee is the first person to model the potential airborne transport of the toxin, and she essentially completed the equivalent of two summer research projects during SARP,” Kudel said.

The NASA Student Airborne Research Program program sends a small group of each summer’s students to the national meeting of the American Geophysical Union, and Conlin was one of those selected. She presented her research at the organization’s December meeting in San Francisco.

She left the meeting having earned an award for the Outstanding Student Paper in the area of hydrology – an honor given to only the top 3 to 5 percent of presenters, including master's and doctoral students, as well as undergraduates.

“Our geography program in meteorology has proven time and time again to be one of the best in the country," said Randy Cerveny, one of Conlin's professors in the School of Geographical Sciences and Urban Planning.

"The fundamental reason for that success has been that we have been able to attract the best and brightest students – and without question Jaylee defines that description. Jaylee has the academic – and personal – qualities that will take her to the top of whatever career path to which she seeks.”

As she prepares to receive her bachelor’s degree, Conlin hopes to return in a few years to begin graduate studies. For now, she’s ready to enter the working world and already has been offered a position with the local branch of an international engineering firm, doing software testing and analysis.

"I look forward to following Jaylee on what I expect will continue to be a strong upward trajectory," said Kudela.