Cosmologist Paul Davies, world-renowned for confronting galactic questions – “Why is the universe just right for life?” and “Are we alone?” – is now applying his inquisitive approach to a 40-year-old puzzle: How to survive cancer. 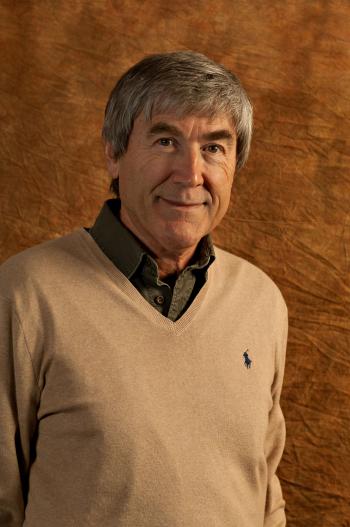 “We’re never going to make any progress with the so-called ‘war on cancer’ without understanding the grand story of life itself,” says Davies, a theoretical physicist and astrobiologist, who recently was named a Regents’ Professor at Arizona State University.

“You have to see it [cancer] in the broader context and that is where astrobiologists fit in,” Davies says. “They ask: ‘What are the key features of life?’ – not what is the story of our form of life, but what does it take for something to be living.”

Davies, who has published research that ranges from how black holes radiate energy to what caused the ripples in the cosmic afterglow of the big bang, is the founding director of the BEYOND Center for Fundamental Concepts in Science at ASU. He was among the first scientists to suggest that life may have started on Mars and came to Earth inside rocks splattered off the Red Planet by comet impacts.

“People pooh-poohed my idea at first, but now it is widely accepted that Mars and Earth may have traded microbes when they traded rocks,” he says.

Davies also was one of a handful of cosmologists to propose the existence of so-called “dark energy,” a type of antigravity that speeds up the expansion of the universe. It was at that time a deeply unpopular theory, but several years later astronomers discovered, to their astonishment, that dark energy really exists.

Throughout his career, Davies has maintained a strong interest in the nature of time and its relationship to cosmology.

When the deputy director of the U.S. National Cancer Institute called him in 2007 and asked if physicists could help by bringing a fresh approach to what she described as a glacial pace of clinical progress in the war on cancer, Davies wasn’t quite sure what to make of the call, but he was intrigued.

“I explained that my career was focused on quantum mechanics and black holes – and that I knew nothing about cancer,” Davies recalls. “She said that was alright and explained that physicists think about the world in a distinctive way and she was looking for fresh ideas and insight from our problem-solving approach.”

Davies now leads one of 12 NCI-funded physical sciences-oncology centers in the United States.

“By connecting the dots of evolutionary, developmental and cancer biology, we have come to view cancer not so much as a disease to be cured as a condition to be controlled,” Davies says.

He and Charles Lineweaver of the Australian National University published a theory of cancer last year “based on the concept that it is an evolutionary throwback to our earliest ancestors.”

“We proposed that cancer results from an accidental reawakening of the earliest metazoan genes, the ones programmed to build the sort of structures that inhabited Earth hundreds of millions of years ago,” Davies says. “If we’re right, then we will have a well-defined target for therapy.”

That kind of fearless championing of bold new ideas earned Davies the moniker of “the disruptor” in a June 2011 profile in the journal Nature. Colleague Stuart Lindsay, a biophysicist at ASU’s Biodesign Institute, told the reporter that “it takes someone like Paul, constantly nagging, asking disruptive questions, to get people to take a fresh look at their assumptions.”

Davies imparts that lesson to students and postdoctoral scholars as well, according to Sara Imari Walker, a NASA Astrobiology Institute post-doctoral fellow working at ASU.

“My research interest is the origin of life and that is a real tough question that requires knowledge of chemistry, biology and physics,” says Walker, who has a doctorate in physics and astronomy. “Paul can converse on all these different subjects and has an amazing capacity to engage people in science by being able to explain very difficult concepts at a level suitable to the audience.

“I’ve learned from him that deep questions really matter and they should inform all the science you do,” she says. “By approaching science that way, it makes you a better scientist. I find that I am asking much better questions about my mainstream research in ways I would not have thought about before.”

Another scientist describes Davies as unassuming.

Says Sid Bacon, an associate vice president for Knowledge Enterprise Development at ASU: “He is a next-door, down-to-Earth kind of guy. But once you start talking to Paul, you discover he is knowledgeable in so many areas.”

Most recent book
"The Eerie Silence: Renewing Our Search for Alien Intelligence"

Popular best-sellers
"The Goldilocks Enigma: Why the Universe Is Just Right for Life"
"How to Build a Time Machine"
"The Origin of Life"
"The Last Three Minutes"
"The Mind of God"
"The Cosmic Blueprint"
"The Big Questions"

Research centers
Australian Centre for Astrobiology, Sydney (past)
BEYOND Center for Fundamental Concepts in Science, ASU
Center for Convergence of Physical Science and Cancer Biology, ASU

Colleen Keller has been honored for her many career accomplishments as a nursing educator and researcher, but being named the first ASU Regents' Professor from the College of Nursing and Health Innovation is perhaps the most satisfying.

Colleen Keller has been honored for her many career accomplishments as a nursing educator and researcher. Among other honors, she has been elected as a fellow to the prestigious American Academy of Nursing and the National Academies of Practice. Her most recent honor – being named the first ASU Regents’ Professor from ASU's College of Nursing and Health Innovation – is perhaps the most satisfying, because the recognition comes from her alma mater. 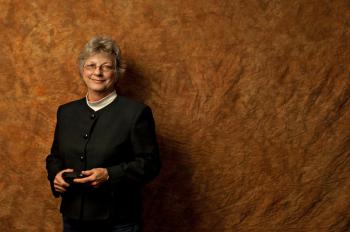 The first Foundation Professor in Women’s Health (2008) and director of both the Hartford Center of Geriatric Nursing Excellence and the Center for Healthy Outcomes in Aging, Keller is among the leaders who research geriatric and racial disparities linked to specific health outcomes, such as cardiovascular health, based on evidence obtained in her clinical practice. She is an expert clinician and nationally recognized scholar who is among the few researchers whose work is being translated into the clinical setting to improve health solutions.

Keller is one of the first researchers in the nation to research health promotion among minority women. She identified the need to develop culturally appropriate interventions that are contextually based, and she devised a social support model that has been used in community interventions across the United States. She currently is principal investigator and co-investigator on two NIH R01 studies.

In reflecting on her career, Keller says that becoming a nurse practitioner (NP) after 18 years as a critical care nurse (CCRN) has been significant to her research.

“It enabled me to ‘marry’ clinical practice with my research,” she says. “I moonlighted at community health clinics for 15 years after I was certified as a NP and currently work one day each week at Maricopa Integrated Health System Women’s Health Center.”

The patients she serves at the Maricopa Integrated Health System Women’s Health Center are primarily younger Hispanic mothers to whom she provides family care, family planning and prenatal care. The new Regents’ Professor feels that the practice links to her research since Hispanic mothers are not as likely to focus on their own health after having their first baby.

“My practice is closely linked to a primary goal of my research to strengthen ethnic and racially diverse women’s decision-making about their own health,” Keller says. “Minority women with health disparities that put them at greater risk for metabolic disease, and who lack access to health care, have an inner core strength that they need to be helped to recognize.”

A nursing graduate of ASU, Keller is on her second tour of duty at ASU. She first served on the ASU nursing faculty from 1988 to 1994 before joining the School of Nursing at the University of Texas Health Science Center at San Antonio.

“I returned to ASU because the university recognizes nursing as a science and has earned a transdisciplinary reputation nationally,” she explains. “I also wanted to work with former dean Bernadette Melnyk, who made the college a trendsetter and who understood that our science goes beyond diagnosis. Now, our challenge is to make the products of our research sustainable.”

True to her nature of being different to make a difference, Keller has her own definition of geriatrics – an area in which she is dedicated to finding better health outcomes in aging as well as building geriatric nursing educator capacity through the Hartford Center of Geriatric Nursing Excellence at ASU.

“Geriatrics isn’t an age,” she says. “It is a process in the care and research that we provide to influence healthy aging behaviors across the lifespan.”

Teri Pipe, newly appointed dean of the College of Nursing and Health Innovation, says she appreciates the difference that Keller has made at ASU.

“It is an honor and a joy to have Colleen Keller as a leader and senior faculty in the college,” Pipe says. “She is a pillar of strength on which we plan to build future research initiatives.”

Keller does not see being named a Regents’ Professor as changing her work. She plans to keep doing what she has done for 20 years: combining her clinical practice and research.

“The real value of the honor is that it opens the door for my colleagues to do the same, just as former ASU faculty Nancy Melvin and Patricia Moore did for me.”