Arizona State University's Project Humanities is proud to announce the second annual Funniest ASU Teacher competition. This competition reaches across all four ASU campuses and aims to highlight the importance of humor as an effective pedagogical tool in the classroom. Project Humanities first held this student-led event last year as part of its fall 2013 kickoff, “Humor… Seriously.” Because of the broad interest and success the contest generated, Project Humanities will continue the popular competition.

Last year’s winner, Tara Franks, was awarded the title after being nominated by her students and submitting a video which outlined the ways in which she used humor in the classroom. She says, “I use humor in the classroom because (well, let’s face it) not only do I believe the classroom is a funny place – full of surprises and laughable moments – but because humor is a rich and valuable learning tool that encourages us all to laugh at life’s absurdities, make sense of its paradoxes, and challenge cultural norms and stereotypes. Thanks to Project Humanities’ Funniest ASU Teacher contest, students are given an opportunity to publicly recognize and appreciate teachers that make a lasting impact on student learning through their use of humor in the classroom.”

To view Franks' winning video and see all the finalists from last year, visit http://humanities.asu.edu/funniest-asu-teacher.

Project Humanities is now accepting nominations for the 2014 contest at humanities.asu.edu. No self-nominations will be accepted. Voting will take place online and at the event after finalists are chosen.

The award will be given out at the Sept. 15 event, where Franks, faculty and student in the Hugh Downs School of Human Communication, will emcee.

For more information about the award-winning Project Humanities initiative at ASU, visit humanities.asu.edu or call 480-727-7030.

The Dariel Truter Overby Memorial Scholarship is awarded to a full-time student majoring in psychology at ASU.

Steven Overby and his wife, Dariel, were driving to their Phoenix home to celebrate on May 7, 1994. The young couple, both of them Arizona State University students, had much to celebrate. Steven had just defended his master’s thesis in environmental resources, and Dariel had taken her last undergraduate exam in psychology. Both were looking forward to the last step of their experience at ASU: the formal awarding of their degrees.

“As we pulled into the driveway,” Steven recounts, “a group of young men tried to steal our car.” Dariel Overby was shot and killed. She died only days before her graduation ceremony. 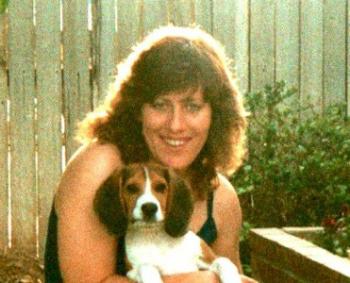 The couple had met at Colorado State University, married and moved to Arizona, Dariel’s home state. Dariel had not finished her degree before coming to Arizona, but it was something she had always wanted to accomplish, Steven says, so she enrolled at ASU.

Soon after, he established the Dariel Truter Overby Memorial Scholarship at ASU. “I thought what better way to memorialize her and do something in her name that she had passion for,” said Steven.

“I set it up knowing there is that sense of struggle for someone who has had a couple years of school but then had to take a break due to finances or some other reason,” he says. “She always wanted to go back and finish her degree. It was a big deal for her. She packed in a lot in a short period of time. Financially, it was tough.”

Instead of flowers at Dariel’s memorial ceremony, people were asked to donate to her memorial scholarship.

Since then, Steven has made consistent contributions. “I knew there was a certain limit for it to be self-sustaining, so I just made an allotment coming out of my regular check,” says Steven. “My original goal was to get it to the self-sustaining level, which it has been at for several years, but I’ve just gone ahead and kept donating. If a family member or friend asks about it and wants to donate, I contact the foundation.”

The Dariel Truter Overby Memorial Scholarship is awarded to a full-time student majoring in psychology at ASU. Steven had the criteria include that the scholar be a continuing education student and someone preferably with a break in his or her academic career; a returning student, like Dariel.

He has kept in touch with some of the scholars through letters. “It really has been a blessing that we set up this fund,” he says. He continues to share the letters with Dariel’s family.

Both he and Dariel had wonderful experiences at ASU, and were particularly inspired by former professor John Brock, of the department of applied biological studies, and former psychology professor Barry Leshowitz, who eulogized Dariel at her memorial service.

“Dr. Brock did so much for me after Dariel was killed to make sure all the necessary paperwork and edits to the thesis were complete and submitted,” said Steven. “I was so despondent following her death, left on my own I probably would have let these things go undone. I owe tremendous gratitude to Dr. Brock, a friend and mentor.”

Overby went on to receive his doctorate from Northern Arizona University and currently works as a soil scientist for the U.S. Forest Service, stationed at the Rocky Mountain Research Station in Flagstaff. He comes from a farming background in Oklahoma and still loves to work outside with plants.

He continues to give back and mentor students. He speaks fondly of having the opportunity to take business students on field trips. “These kids, even though they have business degrees now, talk about how they went on that field trip and how they want to get back together and go to that same place because it was so much fun and such a different experience. It broadens their horizon.”

He believes in inspiring people to contribute to scholarships. “None of us got through school without some kind of help. So I think if you have gone through this, you should give back,” says Overby. “The rewards we get for knowing we are giving someone the opportunity to do something with their lives is really a godsend to us.”

For information about the Dariel Truter Overby Scholarship, contact Mary Negri, senior director of development, at mnegri@asu.edu or 480-965-0878. To apply for the scholarship, visit psychology.clas.asu.edu/undergrad/scholarships.