Teresa McCarty, the Alice Wiley Snell Professor of Education Policy Studies and professor of applied linguistics in the College of Liberal Arts and Sciences’ School of Social Transformation, and co-director of the school’s Center">http://center-for-indian-education.asu.edu">Center for Indian Education, has been honored with the most prestigious award in the field of educational anthropology at the annual meeting of  the American Anthropological Association in New Orleans Nov. 19. McCarty was presented with the George and Louise Spindler Award for  Distinguished Scholarly Contributions to the Field of Educational  Anthropology.


A world renowned expert in language revitalization and recovery, and longtime champion for culturally and linguistically responsive learning environments for Native American students, McCarty has been a member of the ASU faculty since 2004, when she became the first to hold the Alice Wiley Snell endowed professorship. 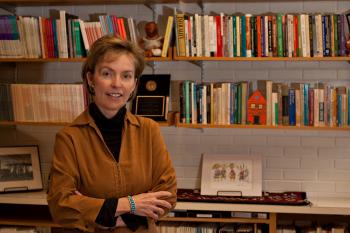 
In presenting the honor, Award Committee chair Harry F. Wolcott, professor emeritus in the University of Oregon’s Department of Anthropology, praised McCarty’s decades of leadership in efforts to improve education for Indian youth and recalled his first interactions with her when he was a visiting faculty member at ASU.


“Thirty years ago, the then associate dean for research in the ASU  College of Education, Leonard Cahen, invited me to come to ASU  for a semester to teach a course in the new field of Anthropology and  Education," Wolcott said. "Among my students was a young woman named Terri McCarty,  an anthropology graduate student who had already been involved in Indian  education. Now, three decades later, we pause to celebrate her  accomplishments and contributions to that field and to demonstrating  what anthropology can offer to the field of education, for Terri has  made this her life's work through her teaching, writing, mentoring,  and years of collaborating with others in efforts to improve  education for Indian youth.


“Her numerous books and articles serve as  testimony of her efforts,” he said. “She has been especially instrumental in  the development of the Council on Anthropology and Education, serving  first as editor of Anthropology and Education Quarterly and most  recently as the council’s president. As Alice Wiley Snell Professor of  Education Policy Studies, her constant efforts to infuse Indian  education with anthropological sensitivity and insight have earned  her the well-deserved George and Louise Spindler Award for  Distinguished Scholarly Contributions to the Field of Educational Anthropology.”


“To see Terri McCarty earn such a distinguished career award in midlife confirms the confidence that we at ASU have in her,” said Linda Lederman, dean of social sciences in ASU's College of Liberal Arts and Sciences. “Our college is anchored in improving excellence, access and impact, and her work significantly addresses all three. Dr. McCarty exemplifies our commitment to use-inspired research that improves the lives of people in Arizona communities and makes an impact globally.”


McCarty says she is especially humbled and touched to be receiving the award honoring the field’s founders, though quite surprised that it should come now, while she’s still serving in the role of past-president to the Council on Anthropology and Education.


But the timing also has made the experience even more thrilling, McCarty said, because of the personnel involved in bestowing this year’s award.


“Harry Wolcott, the award committee chair, became a mentor to me, serving on my graduate committee. And this year’s president of the Council on Anthropology and Education, Bryan Brayboy, who I had the privilege to mentor during his early days as a graduate student at Penn and assistant professor at the University of Utah, is now a close colleague. [Brayboy co-directs ASU’s Center for Indian Education with McCarty and is Borderlands Associate Professor of Educational Leadership and Policy Studies in the School of Social Transformation.] Both Harry and Bryan have been so influential in my life. To have them involved in presenting this award brings together 1.5 generations of educational anthropologists for whom ASU was a nexus.”


McCarty’s passion for research, teaching and activism in Indigenous and language-minority education and policy was ignited while she was an ASU graduate student hired to work as a liaison between a Native community and the public school district serving their children. She vividly recalls her first day at the school. The learning conditions she found induced “a visceral response to blatant injustice that would be a driving force in my work with Native communities,” McCarty said.


“This was a district receiving per capita monies for tutors to work with Native children to provide culturally and linguistically appropriate instruction, so the program had sufficient funding,” she said. “I expected to find, at the very least, a tutoring center, but they were given no space. It was January, and the ‘tutoring’ was going on outdoors, where the children and Native teacher assistants hired to help them were sitting on a stone bench in a cold breezeway. It was a very frontal confrontation with institutionalized racism.”


After completing master’s and doctoral degrees in social-cultural anthropology at ASU, McCarty worked with ASU’s National Indian Bilingual Center and then for the Indian Education Unit of the Arizona Department of Education in Phoenix before launching her professorial career at the University of Arizona in 1989. During her tenure there, she served as professor and head of the Department of Language Reading and Culture, interim dean of the College of Education, and co-director of the American Indian Language Development Institute. McCarty returned to ASU in 2004 to accept a professorship endowed by Richard and Alice Wiley Snell in education policy studies.


Reflecting on what the Snell professorship has meant to her career, McCarty says: “The impact has been huge. It positions you differently – not just with additional financial resources – but in leadership roles within and outside the university. It’s enabled me to do more work internationally with Indigenous people and speakers of other ‘lesser used’ languages, most recently in Russia, Ireland and Latin America. These experiences broaden your network and give you an international lens from which to look back and reflect on what happens here in the United States. And, of course, with any gift comes an obligation and desire to give back. The Snells are totally devoted to the concept of ‘paying forward’ and that’s how I view the work I’m able to do as a result of their gift.”


Indeed, paying it forward characterizes a good deal of McCarty’s work, perhaps most notably with her students. She considers her work with graduate students one of the supreme joys of her career, and her 26th doctoral advisee graduated last spring. At any one time McCarty is serving on three to five external doctoral committees in addition to those she chairs. Some of the most gratifying work, she said, is seeing Native students earn master’s and doctoral degrees.


It is a fine testament to McCarty’s influence and abilities as a mentor that she chaired the doctoral committee for the individual awarded this year’s Council on Anthropology and Education Outstanding Doctoral Dissertation Award. Rucheeta Kulkarni, an ASU doctoral alumna in educational leadership and policy studies, was presented with the highly competitive award at the same meetings of the American Anthropological Association where McCarty was recognized.


McCarty admits that the Spindler recognition has given her an opportunity to give pause and take a few moments to really appreciate the life that she’s been privileged to enjoy – filled with work that she loves and incredible people she’s connected with along the way.


“With a predicted loss of 90 percent of the world’s language diversity by the end of the century, it feels very special to play a small part in a global effort for sustainability of linguistic and cultural diversity,” said McCarty with a sense of urgency and purpose, but also tremendous admiration and gratitude.


“You work with young people and elders and Native educators to support them in taking a language forward as part of a community’s continuing cultural identity. You become part of an extended global family of people involved in language revitalization, who recognize what language means to cultural communities. You walk this path with many people who are with you and part of the work. I love my work, and the work is the people.”

Youngsters and their robots explore how engineering meets medicine

Youngsters and their robots explore how engineering meets medicine

Coordinated by ASU’s Ira A. Fulton Schools of Engineering

Opening address on the impact of biomedical engineering by Dr. Leland Hartwell, Nobel Prize recipient and co-director of the Center for Sustainable Health at ASU’s Biodesign Institute

WHY
It’s all about helping young students develop problem-solving skills, sparking their interest in engineering, science and technology, and educating them about careers in which they can pursue endeavors essential to helping the nation stay at the leading edge of innovation.

DETAILS
More than 400 Arizona youngsters from ages 9 to 14 will compete in contests designed to provide hands-on learning and teamwork experiences in exploring real-world issues in biomedical engineering.

Forty schools from throughout the state will send student teams to ASU to showcase robotics projects that demonstrate how engineering and biological and medical sciences are combining efforts to find solutions to health care problems.

The theme of this year’s competition, “Body Forward,” challenges students with robotics projects that demonstrate how engineering and biological and medical sciences are combining efforts to find solutions to health care problems.

Students’ teachers and families gather as teams vie for the chance to participate in the FIRST LEGO League World Festival, to be held in conjunction with the FIRST Championship, April 27 through 30, 2011 at the Edward Jones Dome in St. Louis.

Regional contests on December 4 to determine participants in the state championship tournament will bring almost 2,000 students on about 200 teams to six different locations throughout Arizona. (See attachment for list of schools participating in regional tournaments).

The tournament will be streamed live through the ASU website at http://live.asu.edu/  click on “View Stream Now.”

The event is open to the public and admission is free, but donations of nonperishable food items will be accepted.

BACKGROUND
Accomplished inventor Dean Kamen founded FIRSTTM (For Inspiration and Recognition of Science and Technology) in 1989 to inspire an appreciation of science and technology in young people. Based in Manchester, N.H., FIRST designs accessible, innovative programs to build self-confidence, knowledge, and life skills while motivating young people to pursue opportunities in science, technology, and engineering. With the support of many of the world’s most well-known companies, the not-for-profit organization hosts the FIRST Robotics Competition and FIRST Tech Challenge for high-school students, FIRST LEGO® League for children 9-14 years old, and Junior FIRST LEGO League for 6 to 9 year-olds. To learn more about FIRST, go to www.usfirst.org.

Systems Inc. (LSI) is the Americas (North America and Latin America) division of The LEGO Group, a privately-held firm based in Billund, Denmark. The LEGO Group is committed to the development of children's creative and imaginative abilities through high-quality, creatively educational play materials, and its employees are guided by the motto adopted in the 1930s by founder Ole Kirk Christiansen:  "Only the best is good enough."  For more information, visit www.LEGO.com