Astrobiologist Paul Davies, acclaimed for addressing galactic questions, including “Why is the universe bio-friendly?” is this year’s recipient of the Robinson Prize in Cosmology from Newcastle University in the UK.

Awarded biennially, the prize was established in 1990 through the generosity of Philip Robinson, a Newcastle native and antiquarian book dealer, who had a particular interest in cosmology and in making cosmology accessible to broader audiences. 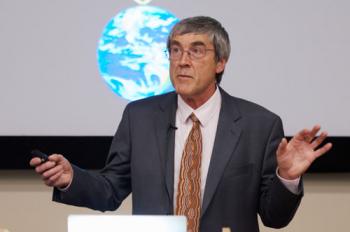 The British-born Davies, a theoretical physicist at Arizona State University since 2006, was a professor at Newcastle from 1980 to 1990 before moving to the University of Adelaide in Australia. From there he helped establish the NASA-affiliated Australian Centre for Astrobiology at Macquarie University in Sydney, where he applied his expertise in physics and cosmology to the search for life in the universe.

“Advances in physics suggest that instead of one ‘big bang’ there may be an infinite number throughout space and time, and that the observed universe is merely an infinitesimal fragment in a vast, more elaborate system, dubbed the ‘multiverse,’” said Davies. “This perspective also offers an explanation as to why our own universe is so bio-friendly that it looks like an intentional design.”

Known for circumnavigating the globe as a provocative speaker, Davies delivered a public lecture Nov. 24 at Newcastle University on the topic “Why is the university bio-friendly?” as part of the honor in receiving the Robinson Prize. Previous recipients of the prize include Lord Rees of Ludlow, James Peebles, Kip Thorne, Andrei Linde and John Mather.

At ASU, Davies is director of two pioneering research units: the BEYOND Center for Fundamental Concepts in Science, a cosmic think tank; and the exciting new Center for the Convergence of Physical Science and Cancer Biology, one of 12 Physical Sciences-Oncology Centers receiving funding from the National Institutes of Health’s National Cancer Institute.

His research is steeped in the branches of physics that deal with quantum gravity – an attempt to reconcile theories of the very large and the very small. His published research ranges from how black holes radiate energy and what caused the ripples in the cosmic afterglow of the big bang, to why life on Earth may have come from Mars.

Davies is a prolific author or co-author of some 30 books, both popular and specialty works, most recently “The Eerie Silence: Renewing Our Search for Alien Intelligence.” Among his other books are: “The Goldilocks Enigma: Why the Universe Is Just Right for Life,” How to Build a Time Machine,” “The Origin of Life,” “The Last Three Minutes,” “The Mind of God,” “The Cosmic Blueprint” and “The Big Questions.”

He is the recipient of numerous awards, including the 1995 Templeton Prize and the 2002 Michael Faraday Prize from the Royal Society. Earlier this month, Davies was among seven ASU faculty members who were named Regents’ Professors in recognition of pioneering contributions in their areas of expertise.

Melissa Montoya participated in a national competition for the most gifted wrapper in New York City on Dec. 2.

Whether she’s wrapping people or presents, Melissa Montoya has mastered the fine art of cloaking with costumes and paper. 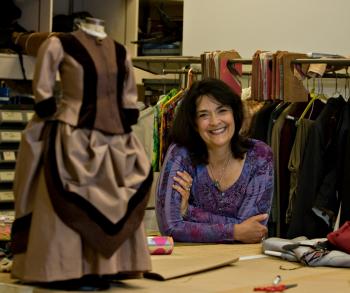 Her love affair with wrapping began in high school when she worked summers and holidays wrapping presents for a small boutique. She recently took her skills to a higher level by competing for a $10,000 prize in the Scotch Brand Most Gifted Wrapper Contest, Dec. 2, in New York City. She was chosen as one of eight finalists from hundreds of entries competing for the 2011 “gifted wrapper” title. Although she didn't win, the competition was "lots of fun."

Montoya is a costume coordinator in the School of Theatre and Film, part of ASU's Herberger Institute for Design and the Arts – an intriguing position that requires her to take costume designers' sketches and turn them into costumes. Churning out costumes for ASU theater productions is a challenging line of work that requires Montoya and her colleagues to sew every kind of costume, from a seven-foot wide dress to attire worn in outer space.

Montoya’s participation in the contest came about by marital intervention, namely her husband writing an essay about her experience that landed her in the finals as a professional wrapper. Van Montoya, formerly of the ASU Police Department and now with Sun Devil Campus Stores, wrote about his wife’s past wrapping experience in high school and later working for Dillard’s where she set up Christmas shops in stores around the Southwest.

“I thought it was funny that he entered me. I didn’t mind,” Montoya said.

Devising a strategy for the contest was a process of applying skills learned through her experience cutting patterns to wrapping items given to her, especially crazier things such as a child’s slide. Studying the object, considering planes, and slashing and manipulating the paper to give an item a pleasing shape are techniques that can be applied to costumes and packages.

“We have to figure out strange things all the time,” Montoya said.

Some of those stranger projects include making a trout costume and a Steampunk-inspired helmet complete with lights created by her co-workers.

Montoya also has had plenty of experience making things that are pleasing to the eye. Clothing has been her primary focus – designing for the elderly and handicapped, working for the company that makes Wrangler jeans, doing specialty work for designers Marithe and Francois Girbaud, and coming to ASU where she has worked for the past 23 years.

“Walking into this shop was like a coming-home feeling,” Montoya said. “We get to do everything here. I just love it.”

And, she still finds time to wrap presents for family and friends when she’s not draping actors and actresses in costumes.

“I believe that you impart love and compassion with your hands when you wrap a gift for someone you care about. You send love to them and it’s a nice touch,” Montoya said.

If you’re wrapping gifts this holiday season, keep these tips from Montoya in mind:

Use an appropriate amount of paper, not too much or too little. Choose paper that is pleasing to the eye and that fits the package. For instance, you can make a chevron at the end of a package with striped paper. Fold the paper under so that the edges are smooth and make even creases. Put tape on the bottom or sides so the top is smooth. Use wide ribbon to create spectacular bows.

Herberger Institute for Design and the Arts Arts Employee