President Obama named an Arizona State University program – the Mathematical and Theoretical Biology Institute – as a recipient of the 2011 Presidential Award for Excellence in Science, Mathematics, and Engineering Mentoring. The ASU institute was founded by Regents’ Professor Carlos Castillo-Chavez, a mathematical epidemiologist, to increase the number of underrepresented U.S. populations in fields where mathematical, computational and modeling skills play a critical role.

The Presidential Award for Excellence in Science, Mathematics, and Engineering Mentoring being given to nine individuals and eight organizations, recognizes the crucial role that mentoring plays in the academic and personal development of students studying science and engineering – particularly those who belong to groups that are underrepresented in these fields. 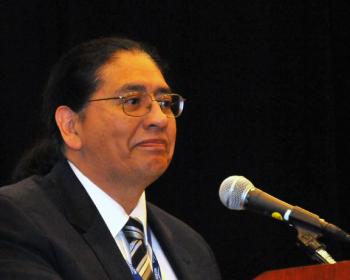 By offering their expertise and encouragement, mentors help prepare the next generation of scientists and engineers while ensuring that tomorrow’s innovators reflect and benefit from the diverse talent of the United States, noted the Nov. 15 White House announcement.

“Through their commitment to education and innovation, these individuals and organizations are playing a crucial role in the development of our 21st century work force,” President Obama said in a written statement. “Our nation owes them a debt of gratitude for helping ensure that America remains the global leader in science and engineering for years to come.”

Candidates for the award are nominated by colleagues, administrators and students in their home institutions. The mentoring can involve students at any grade level from elementary through graduate school. In addition to being honored at White House ceremonies later this year, recipients will receive awards of $25,000 from the National Science Foundation to advance their mentoring efforts.

“ASU's vision encapsulated in ‘access, excellent and impact’ as well as in a model of ‘one university in many places’ has made it possible for the Mathematical and Theoretical Biology Institute to change the landscape in the mathematical sciences,” said Castillo-Chavez, who received the 2007 Mentor Award from the American Association for the Advancement of Science. He also was honored in 2010 by the American Mathematical Society for distinguished public service.

“Recognitions are the result of team work and policies that guarantee the sustainability of models of higher education where research is at the heart of the effort. MTBI and its model of learning-through-research has open the doors of the possible to talented students, particularly from U.S. underrepresented minorities; students who have begun to take on positions of leadership,” said Castillo-Chavez, a distinguished sustainability scientist with ASU’s Global Institute of Sustainability. He also is a professor in the School of Human Evolution and Social Change and director of the Mathematical, Computational and Modeling Sciences Center at ASU.

The Mathematical and Theoretical Biology Institute was founded in 1997 at Cornell University. It became a joint enterprise involving Cornell, ASU and Los Alamos in 2003, according to Castillo-Chavez, and moved to ASU in 2006.

MTBI is a summer program whose main objective is to increase the representation of underrepresented U.S. minorities earning doctoral degrees in the mathematical sciences, from a pool of participants primarily composed of students from non-selective institutions or students who typically do not consider the possibility of graduate school in the mathematical sciences, Castillo-Chavez said.

Over the course of 15 summers, participants have generated 150 technical reports and a large number of refereed publications while directly impacting the research programs of graduate students, postdocs, visitors and regular faculty. MTBI has enrolled a total of 347 first-time undergraduate students and 72 returning students to its summer program. Over this time an additional 124 graduate mentors have participated, said Castillo-Chavez, adding that 78 participants to date have earned doctorates.

Alumni Association announces winners of 'What’s on Your Plate?' contest

The Arizona State University Alumni Association recently announced that Michael McLendon and Michael Smith were the winners of the association’s What’s On Your Plate contest, which invited Sun Devils to submit pictures of their ASU-themed license plates.

Alumni Association announces winners of 'What’s on Your Plate?' contest

The Arizona State University Alumni Association announced today that Michael McLendon and Michael Smith are the winners of the association’s What’s On Your Plate contest, which invited Sun Devils to submit pictures of their ASU-themed license plates. There were more than 25 entries in the contest, and nearly 500 Sun Devils voted online to determine the winners.

McLendon will receive two tickets to a suite in Sun Devil Stadium to watch the Duel in the Desert as the Sun Devils take on their UofA rivals on Nov. 19, as well as a Sparky Car Kit filled with ASU logo items for his vehicle. Smith’s prize pack will include a $100 gas card and a Sparky Car Kit.

The association also announced runners-up for the contest: Abe Titze and Deborah Hull in the in-state division, and Denise Gangi-Pollacek and Timothy and Tamara Keighron in the out-of-state division. They will receive Sparky Car Kits as prizes.

One goal of the What’s On Your Plate contest was to raise awareness of the ASU collegiate license plate program in Arizona and to recognize the enthusiasm of Sun Devil fans. Seventeen dollars of every $25 charged by the state of Arizona for the license plate is allocated to the university’s Medallion Scholarship fund. The Medallion Scholarship program gives students who are Arizona residents financial support, as well as the opportunity to foster their personal development and leadership skills while attending ASU.

Hundreds of ASU Medallion Scholarship recipients have benefitted from the funds generated by proceeds from the Sparky license plate since it first hit Arizona roadways in 1989. The current Medallion Scholarship program is comprised of 103 current ASU students majoring in fields that include business, engineering and liberal arts, among many others. Twenty-three of those students will graduate in May 2012.