Ronald Greeley, a Regents’ Professor of planetary geology at Arizona State University, who has been involved in lunar and planetary studies since 1967 and has contributed significantly to our understanding of planetary bodies within our solar system, died Oct. 27, in Tempe. He was 72.

As the son of a military serviceman, Greeley moved around a great deal as child. As a result he saw many different geological landforms and it was no surprise that when he went to college, he majored in geology. Greeley earned undergraduate and graduate degrees from Mississippi State University. After receiving his doctorate in 1966 at the University of Missouri in Rolla he worked for Standard Oil Company of California as a paleontologist. 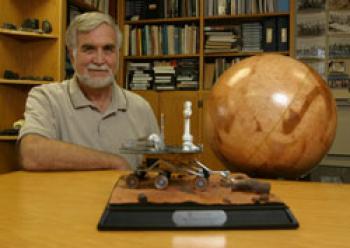 Through military duty, he was assigned to NASA’s Ames Research Center in 1967 where he worked in a civilian capacity in preparation for the Apollo missions to the Moon. He stayed on at NASA to conduct research in planetary geology.

“I had been on sabbatical at NASA Ames Research Center working on the analysis of lunar samples, and I saw Ron and I saw potential,” recalls Carleton Moore, founding director of ASU’s Center for Meteorite Studies. “When I got the opportunity, I hired him.”

Greeley began teaching at ASU in 1977 with a joint professorship in the department of geology and the Center for Meteorite Studies. He studied wind processes on Earth and other planets and conducted photogeological mapping of planets and satellites among other research projects. In 1986, Greeley left the Center for Meteorite Studies to serve as chair of the department of geology.

“It was exciting to have him here; he was a major step in advancing space at ASU. He was the first one that came that did missions and experiments on planetary bodies,” says Moore. “He was really the first person to reach out to the other planets. And then he hired Phil Christensen.”

“Ron Greeley was indisputably one of the founders of planetary science, and the influence he has had, both through his own work and through the students and colleagues that he guided and mentored, touches virtually all aspects of this field,” says Christensen, a Regents’ Professor in the School of Earth and Space Exploration in ASU’s College of Liberal Arts and Sciences.

“Ron played a major role in my career,” says Christensen. “I came to ASU specifically to work with Ron after receiving my graduate degree, and I have remained at ASU for 30 years largely because of the remarkable environment that Ron created here to foster planetary science as an extension of geology.”

Greeley, a pioneer in the planetary geology field, served as the director of the NASA-ASU Regional Planetary Image Facility and principal investigator of the Planetary Aeolian Laboratory at NASA-Ames Research Center. He served on and chaired many NASA and National Academy of Science panels and he was involved in nearly every major space probe mission flown in the solar system since the Apollo Moon landing. Mission projects included the Galileo mission to Jupiter, Magellan mission to Venus and Shuttle Imaging Radar orbiter around Earth. He was also part of the data analysis program for the Voyager 2 mission to Uranus and Neptune. His projects focused on the moons of these distant bodies. Passionate about Mars exploration, he has been involved with several missions to the Red Planet, including Mariner (6, 7, 9), Viking, Mars Pathfinder, Mars Global Surveyor and the Mars Exploration Rovers. He is a co-investigator for the camera system onboard the European Mars Express mission.

Former students scattered throughout the universities and research institutes of this country provide testimony to his influence on planetary geology.

“As I began my research career, Ron reminded me of the old adage: ‘A journey of 1,000 miles begins with a single step.’ I am fortunate to have had Ron there walking beside me,” says Robert Pappalardo, senior research scientist at NASA Jet Propulsion Lab. Greeley served as Pappalardo’s advisor. After receiving his doctorate from ASU in 1994, Pappalardo worked with Greeley for one year immediately after that as a postdoc. Since about 2002, the two had worked together on the science basis for Europa mission studies.

“Ron was a gentleman, a statesman, a mentor, a scholar,” says Pappalardo. “Not a day goes by that I don’t think, in some situation, ‘What would Ron Greeley do?’”

“Ron was a profoundly influential scientist whose imprint on planetary science will live on through his body of research and the many students he taught and mentored. He was a wonderful friend and colleague. We were fortunate to have known him and will miss him terribly,” said Kip Hodges, founding director of the School of Earth and Space Exploration. Greeley served a year as interim director of the school before Hodges joined ASU.
“Ron has been a very good friend of mine for many years, an incredible leader in planetary science, and the founder and guiding force for planetary science here at ASU. His leadership, friendship, and vision will be sorely missed,” says Christensen.

Greeley’s work lives on in proposed missions to Europa, a moon of Jupiter, and in the numerous students he mentored who today play pivotal roles in space science efforts.

Greeley is preceded in death by his daughter, Vanessa. He is survived by his wife Cindy and his son, Randall (Lidiette). He leaves behind three grandchildren.

A memorial service is scheduled for Monday, November 7. There will be a visitation with the family from 2:30-3:45 p.m. and a memorial service from 4-5 p.m.  at the LDS Church, 2707 S. College Ave., in Tempe. Link to map: http://g.co/maps/82vr3. The family is asking that, in lieu of flowers, donations be made to the "Ron Greeley Memorial Fund." Memorial donations may be made to the ASU Foundation for the Ronald Greeley Memorial Endowment, c/o the School of Earth and Space Exploration, PO Box 871404, ASU, Tempe, AZ 85287-1404.

A Facebook page dedicated to Professor Greeley will also be updated with related information: http://www.facebook.com/profile.php?id=100003109532235&sk=wall.

We share the world with them, but do we really know what it's like to be an animal? Ron Broglio explores the limits of human understanding of the animal world.

To some people in Phoenix, the coyote is an image of wilderness. To others, it is simply a nuisance. No matter your perspective, humans have a limited understanding of what it’s like to live in the coyote’s world. In fact, we can never truly know what it is to be another animal.

Ron Broglio, an assistant professor in ASU’s Department of English, in the College of Liberal Arts and Sciences, studies the limits of human perception and the impossibility of understanding the experience of animals. His upcoming book, "Surface Encounters: Thinking With Animals and Art," explores the work of artists who focus on the human-animal relationship. 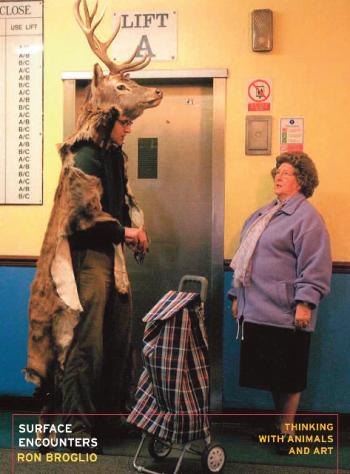 Animals are the fur that jams the gears of the well-oiled social machine,” Broglio says. He is interested in the friction that sometimes occurs living in a world where humans and animals are forced to coexist.

Broglio first became interested in understanding the experience of animals during a teaching stint at Oxford, where he met two artists who worked with taxidermy-stuffed polar bears. He realized that many animals only enter human history at the time of their death.

"In order to know something, we often destroy it. How can we get to know a world in its vitality and flourishing without causing violence?” Broglio asks.

To answer this question, Broglio studied artists, who he says are able to provoke a sense of wonder that goes beyond our scientific understanding of animals. One such example is the work of artistic duo Olly and Suzi, who specialize in drawing predator species in their natural habitats.

“Let’s say they’re working with great white sharks," Broglio says. "They go into a dive tank in the water where the shark is, and as the shark is coming towards them, they draw the shark under water – the two of them hand over hand. Then they give the canvas to the shark. The shark might bite it or rub against it, and the bite marks then become its marking of the canvas. The canvas becomes a space that shares the animal’s world and the human world."

Broglio explains that the canvas, once placed in a gallery, forces viewers to examine the negotiation of space between animal and human.

"Surface Encounters" also describes the work of artists Bryndís Snæbjörnsdóttir and Mark Wilson in one of their exhibitions titled "Uncertainty in the City."

“They interviewed people about what kind of animal constitutes a pest," Broglio says. "In each case, it’s this question of encounter and what people take away from that encounter, whether they take away something of wonder and awe or of concern or anxiety."

Like coyotes in Phoenix, people all over the world view animals differently. In England, for example, Broglio says some people perceive the fox as a welcomed glimpse of wilderness. Others see a pest, and would prefer that wildlife stay hidden from city life.

Why is it important to try and understand the life of an animal, or to be aware of how we perceive them? One reason, Broglio explains, is that studying the animal “decenters the human,” and forces us to think beyond our intellectual comfort zone.

“In the context of the college of arts and sciences, literature and art is usually humans talking about humans. No matter what academic discipline we’re in, looking at the animal takes us outside ourselves.”

In a broader sense, Broglio says studying animals reminds us that we share the Earth with others. With the effects of climate change already taking place, such as melting glaciers and rising sea levels, both the human and animal world is changing. But humans can’t experience these changes through the eyes of animals.

“I think it’s important to recognize that while humans and animals are on the same Earth, we’re in different worlds," Broglio says. “Ideally, looking at the animal world creates a sense of respect for something that it alien to us.”

Surface Encounters is currently available for preorder from Amazon.com.