The Gravity Research Foundation (GRF) conducts an annual contest that honors short essays on research into the nature of gravity. The Krauss-Wilczek paper is titled “From B-modes to quantum gravity and unification of forces,” and describes how the recent claimed discovery of gravitational waves from the early universe can provide definitive evidence that gravity must be understood as a quantum theory. 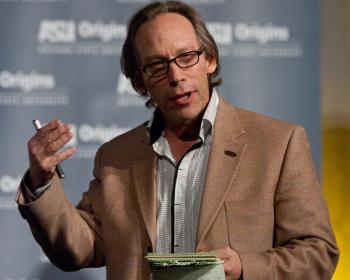 GRF Awards for Essays on Gravitation is a prestigious annual competition, inaugurated in 1949, for short papers describing the authors' original research in the fields of general relativity and quantum gravity. Now in its 65th year, the prize has become highly regarded by physicists worldwide.

Previous winners of the prize include Stephen Hawking and Nobel laureate George Smoot, as well as Bryce DeWitt and many other famous physicists from around the world.

“This is a delightful surprise,” Krauss said. “This is actually the second time I have been awarded first prize. The first time was precisely 30 years ago when I was a researcher at Harvard, so this repeat performance comes at a special time,” said Krauss who also has won awards for second, fourth and fifth prizes in the past.

“The work that Frank and I wrote about this year is something that I think has ultimately profound consequences for our understanding of gravity, so I am very pleased it was recognized that way by the GRF,” Krauss added.

Krauss and Wilczek have increasingly collaborated over the years. In the past year, they have worked on the idea of how to use the universe to search for the effects of gravitons. In that paper, they suggest that measuring minute changes in the cosmic background radiation of the universe could be a pathway of detecting the telltale effects of gravitons, the highly sought after elementary particle of gravity. This research is reported on in their GRF essay.

Krauss is a Foundation Professor in the College of Liberal Arts and Scieces at ASU and the director of the Origins Project, which explores key questions about our origins, who we are and where we came from, and then holds open forums to encourage public participation.

Wilczek is a Nobel Prize-winning physicist with MIT. He holds a part-time position at ASU.

“I love writing with young people,” says Tracey Flores, the ASU doctoral student in English education who is responsible for bringing Barrio Writers – a free summer writing camp for urban youth – to Arizona.

Thirty-five youth are sharing their stories and developing their craft as writers in the weeklong School of Letters and Sciences-sponsored workshop that begins today on ASU’s Downtown Phoenix campus. The Barrio Writers program, founded in 2009 in Austin, Texas, works to empower writers aged 13 to 21 through creative writing and involvement in higher education and cultural arts.

ASU’s sessions are being led by graduate students, community educators and local artists, and include free cultural arts field trips.

Some of the special experiences planned for the workshop include a panel in which ASU alumni of the Latina/o Greek organizations Kappa Delta Chi and Omega Delta Phi will share their academic and professional journeys with the writers, and a visit to the "Libería Donceles" exhibition at the ASU Art Museum.

Students finish out the week giving a public reading at 6 p.m., June 14, at the Arizona Latino Arts and Cultural Center in downtown Phoenix.

Flores says some of her fondest memories as a classroom teacher (she most recently taught in the Glendale School District) were the times spent working on writing, and hearing kids share their personal and family stories.

“Many students would leave my classroom as writers – looking for extended opportunities to continue to develop their writing and learn new strategies for strengthening their voice,” she notes. “But often, these opportunities were out of reach for them due to location or the cost of registration fees.”

When Flores stumbled across the Barrio Writers program on an online social media space, she immediately felt a connection.

“The goals of the program resonated with me and my beliefs about the power of writing,” she says. “I started following the work of Barrio Writers and the great writing that youth in Texas and California were publishing in the program’s annual anthology and sharing in community readings."

Flores reached out to the founder, formed a relationship online and from there, took the steps needed to bring the program to Arizona.

“I’ve been supported in various ways by many people who also believe in providing these spaces for youth – our future scholars and changemakers,” she says about the effort to bring the workshop to Phoenix.

Flores first brought the idea to ASU English professor Jim Blasingame, who was enthusiastic from the start, and said, "Let's make this happen."

"He connected me with Dr. Bobbie Lafford, head of the Faculty of Languages and Cultures in the School of Letters and Sciences on the Downtown Phoenix campus, who has been a huge support, along with Sandra Chavez-Lopez, student services coordinator in the school," she explains. "They’ve worked to help provide workshop space [that is] easily accessible to students via the light rail.”

In addition to giving teens the chance to build their writing chops and confidence, Flores says “the program will continue to act as a supportive network to participants beyond the summer experience. We hope that for many, it will also be a pipeline to college and the university.”