Lawrence Krauss has spent much of his lifetime trying to solve the riddles nature has put before us. He also spends a lot of his time communicating the complexities of nature and its hidden beauty to a wider public.

Those latter efforts have earned Krauss, who is a Foundation Professor in ASU's School of Earth and Space Exploration and the Department of Physics, the 2012 Public Service Award from the National Science Board. The NSB is the 25-member policymaking body for the National Science Foundation and advisory body to the President and Congress on science and engineering issues. 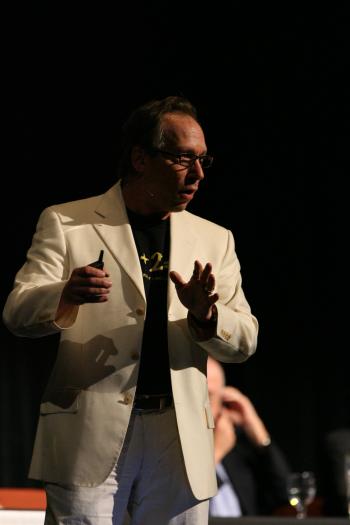 Throughout his career, Krauss, a renowned theoretical physicist, has taken elements of popular culture and used them as starting points to convey scientific ideas and turn on in individuals the desire to know more.

To that end, he has written several best-selling books, lectures extensively, writes for national newspapers and magazines, appears on radio and television, and convenes meetings with leading intellectuals talking physics, cosmology, nuclear security, social psychology, creativity, our place in the universe and why we (and the universe) even exist at all. He has been hailed by Scientific American as a rare “public intellectual.”

“Lawrence Krauss’ broad public outreach bridges science and popular culture through various media and intellectual pursuits, and we are proud to name him as the recipient of the 2012 NSB Public Service Award presented to an individual,” said Ray Bowen, NSB chairman.

“I am humbled and honored to receive this remarkable national award from the National Science Board,” Krauss said. “I will count this as one of the highest honors I have received. Science is the greatest intellectual adventure that I can imagine, and it involves some of the most exciting and awe-inspiring discoveries and ideas that humans have come up with, which is why I am so excited to be part of the enterprise.”

“I believe we owe it to the public to share these ideas more broadly,” he added. “Most people are actually fascinated by science once they realize that the questions they have always asked themselves really are scientific questions. This is what I have tried to encourage. And in the 21st century, we need to encourage greater scientific literacy among the public and among our political leaders if we are to address the numerous global challenges we face.”

Krauss has authored more than 300 scientific publications and nine books, including the international bestseller "The Physics of Star Trek," an entertaining and eye-opening tour of the Star Trek universe, and "Beyond Star Trek," which responds to recent exciting discoveries in physics and astronomy and takes a look how the laws of physics relate to notions from popular culture. A recent book on physicist Richard Feynman, "Quantum Man," was awarded the 2011 Book of the Year by Physics World magazine in the UK.

His most recent bestseller, "A Universe from Nothing," offers provocative, revelatory answers to the most basic philosophical questions of existence. It was on the New York Times Best Sellers list for nonfiction within a week of its release.

In addition to being a professor at ASU, Krauss is the director of the Origins Project, which explores key questions about our origins, who we are and where we came from, and then holds open forums to encourage public participation.

Krauss has been a frequent commentator and columnist for newspapers such as the New York Times and the Wall Street Journal. He has written regular columns for New Scientist and Scientific American, and appears routinely on radio and television.

He continues to be a leader in his field as he serves as a co-chair of the board of sponsors of the Bulletin of the Atomic Scientists, on the board of directors of the Federation of American Scientists, and is one of the founders of ScienceDebate2012.

Additionally, he performed solo with the Cleveland Orchestra, narrating Gustav Holst's "The Planets" at the Blossom Music Center for the most highly attended concert at that venue. Krauss also received a Grammy nomination for his liner notes for a Telarc CD of music from "Star Trek" and served as a judge at the Sundance Film Festival.

Krauss is internationally known for his work in theoretical physics – he is the only physicist to receive major awards from all three U.S. physics societies: the American Physical Society, the American Institute of Physics and the American Association of Physics Teachers.

Krauss will receive the NSB Public Service Award for an individual medal and certificate at an awards ceremony and dinner on May 3 at the U.S. Department of State in Washington, D.C. Other honorees will include the recipients of the Vannevar Bush Award, the NSB Public Service Award for a group and National Science Foundation's Alan T. Waterman Award.

ASU to use $27.5M Walton investment to accelerate sustainability efforts

The Rob and Melani Walton Fund of the Walton Family Foundation is providing $27.5 million to ASU's Global Institute of Sustainability.

ASU to use $27.5M Walton investment to accelerate sustainability efforts

The Rob and Melani Walton Fund of the Walton Family Foundation is providing $27.5 million to Arizona State University’s Global Institute of Sustainability (GIOS) to develop and deploy promising solutions to sustainability challenges, including energy, water, environment, climate, urbanization, social transformation and decision-making in local, national and global contexts and to educate future leaders in sustainability. The investment to ASU is designated entirely for program support. 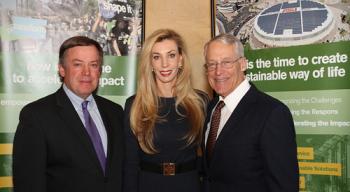 The Rob and Melani Walton Sustainability Solutions Fund will support four strategies over the next five years that will:

• seed fund the most promising, high-impact ideas in sustainability research

• train the next generation of sustainability scholars, government and non-governmental practitioners through a fellowship program

“Rob and Melani Walton have been integral in helping ASU realize its sustainability vision with Rob as a board member of GIOS, facilitating the creation of the nation’s first School of Sustainability, and now, with this investment,” said ASU President Michael M. Crow. “Their commitment will significantly advance our work to find local solutions to global problems that will help us create a sustainable way of life.”

The Waltons have long supported sustainability and conservation programs. Melani Walton is active with the Nature Conservancy of Arizona and Conservation International, in addition to other philanthropic organizations. Rob Walton is co-chair of the board of directors for sustainability at ASU and a director of Conservation International, as well as chairman of the executive committee. He also is chairman of the board of directors of Walmart.

“Our intent with our investment is to develop sustainability strategies that ensure the long-term economic viability and continuous evolution of the programs seed funded by this grant,” said Rob Walton. “We want to educate future leaders and empower current scholars so they will effectively apply knowledge to action, creating a better world for all of us.”

“This is a major investment in civilization’s future,” emphasized R.F. “Rick” Shangraw Jr., chief executive officer of the ASU Foundation for a New American University. “Some people want to see change and then others – like Rob and Melani Walton – enable the type of change we must see to ensure a sustainable future.”