Every year students from around the world come to Arizona State University seeking new ways to engage and thrive in a global marketplace.

Now in its second year, the Outstanding International Student Leadership Awards celebrate this vibrant and culturally diverse student population. The awards were presented to three students who exemplified exceptional academic achievement, a strong dedication to the surrounding and ASU community, and Sun Devil pride. 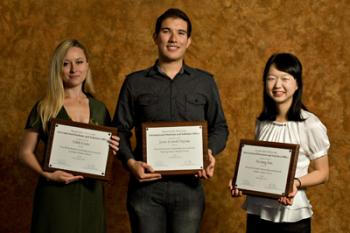 The winners are as follows:

Javier Corral Clayton – student in Barrett, the Honors College, majoring in chemical engineering with two minors in sustainability and business. Clayton is an active member of the Residence Hall Association and Coalition of International Students. Furthermore he is an intern with the Arizona Students’ Association and a Devil2Devil Student Ambassador.

Hyejung Lim – student in Barrett, the Honors College, majoring in sustainability. Lim has been involved in the Residence Hall Association, being a General Council representative and Towers Hall Council President. She is also a Sustainability Assistant for Dell, a member of the New Venture Group at ASU and an ambassador for the School of Sustainability. Lim also volunteers at Maya’s Farm at South Mountain.

There are currently more than 4,400 students at ASU representing 120 countries around the world. The university also has numerous global partnerships and educational agreements with universities in many countries – including China, Vietnam, Mexico and Canada.

Students at the Walter Cronkite School of Journalism and Mass Communication have won seven awards in the Society of Professional Journalists' prestigious national Mark of Excellence competition.

Students at the Walter Cronkite School of Journalism and Mass Communication have won seven awards in the Society of Professional Journalists’ prestigious national Mark of Excellence competition, including best student newscast and best online in-depth report.

The ASU students won three first place awards and four national finalist awards, giving the school the second-highest award total of any school in the country. The Cronkite School has the best overall record in the national SPJ contest for the past seven years and has dominated its region for the past decade.

“How Safe Is Your Food?,” a national investigation into food safety conducted by students in the Carnegie-Knight News21 in-depth journalism program, won first place in the online in-depth reporting category.

Journalism junior Vaughn Hillyard earned first place honors in the online opinion and commentary category for his columns for the independent publication Downtown Devil, which was a national finalist for best independent online student publication.

Kristin Gilger, associate dean of the Cronkite School, praised the students and their award-winning work.

“What impresses me is not just the quality of the work but its scope,” Gilger said. “Cronkite students are among the best across the board – whether they’re producing a newscast, doing investigative reporting, writing a column or creating a multimedia website.”

The winners were selected from more than 4,000 entries submitted by student journalists nationwide. The awards will be presented in September at the SPJ national conference in Fort Lauderdale, Fla.

Students who advanced to the national awards first attained honors in the regional competition. The Cronkite School took first place in the SPJ Region 11 Mark of Excellence Awards for the 12th consecutive year, taking home 38 awards – more than double the number won by the next closest school.

The national winners are as follows:

• Online In-Depth Reporting: News21 Staff, “How Safe Is Your Food?”

• TV News Photography: Dan Neligh, “A Line in the Sand: The Story of Two Volunteers on the U.S.-Mexico Border”