As the familiar lyrics to the Dylan-inspired “Wagon Wheel” filled the Pat Tillman Veterans Center at Arizona State University, two student veterans shared their voices and a sentimental moment strumming new guitars they had just received:

“So rock me momma like a wagon wheel,
Rock me momma any way you feel,
Hey momma, rock me.” 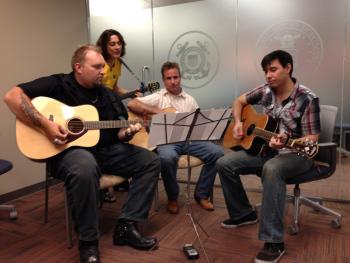 The first ASU student veterans to complete the 10-week Guitars for Vets program, Jonathan Jameson and Jason Smith were presented with the stringed instruments by professor Mark von Hagen, director for ASU’s new Office of Veteran and Military Academic Engagement. A former Marine, Jameson is a 2014 ASU graduate, receiving his bachelor’s degree in interdisciplinary studies with a communication concentration in the School of Letters and Sciences. Smith served in the U.S. Army and is an ASU junior majoring in art studies in the Herberger Institute School of Art.

A third student veteran earning a guitar, John Luebke, was on a study-abroad program and unable to attend the pre-Memorial Day ceremony and reception. He is a U.S. Marine Corps veteran and an ASU junior majoring in history in the College of Liberal Arts and Sciences.

Smith recalled that near the end of his tour in Iraq, he found a guitar that he cleaned up, fixed and started teaching himself to play. It was something he could share with his fellow soldiers.

“Having the Guitars for Vets program helped me reconnect with that sense of calmness and feeling that I haven’t really had since I left Iraq,” he explained. “Having other soldiers or service members around to play music alongside of you is a great feeling.”

Begun as a groundbreaking partnership in 2013, the unique pairing of the ASU School of Music with the Tempe chapter of Guitars for Vets is the first of its kind for the national non-profit organization. Based in Milwaukee, Guitars for Vets, Inc. has 30 chapters that enhance the lives of ailing and injured military veterans by providing them with guitars and music instruction.

ASU’s Music Therapy Clinic in the School of Music and the Phoenix Chapter of Guitars for Vets initially teamed up to help train six veterans from the local area. As they built musical skills and relationships, they also discovered new ways to cope with stress and improve their quality of life after military service.

“Of course, a lot of veterans have trouble expressing their problems or their accomplishments,” said von Hagen. “And the arts – whether it’s poetry or writing or music or theater – offer a space where human beings can communicate with other human beings and get to know each other.”

This past semester was the first time veterans who were students at ASU completed the Guitars for Vets training. Behind the scenes, the program credits its success to a collaboration of ASU music therapy faculty, graduate students, recent Guitars for Vets graduates and Phoenix Chapter leaders.

“As the Guitars for Vets pilot class, these three student veterans deserve our thanks for their determination and willingness to try a new approach to veteran community building at ASU,” said Robin Rio, associate professor of music therapy and director of ASU’s Music Therapy Clinic.

Jameson said participating in the Guitars for Vets program, described as “the healing power of music in the hands of heroes,” has been a way to help transition out of the military and back into civilian life.

“I’ve participated in a few programs in terms of hanging out with other veterans,” he explained. “You can share your stories and express things that you wouldn’t be able to talk about with other people.”

ASU's Center for Science and the Imagination, Intel and the Society for Science & the Public are proud to announce the winners of their competition, "The Future – Powered by Fiction."

Arizona State University's Center for Science and the Imagination, Intel and the Society for Science & the Public are proud to announce the winners of their competition, "The Future – Powered by Fiction." The competition, which ran from May through December 2013, challenged young people ages 13-25 from all over the world to share their visions for possible futures inspired by real science and technology. "The Future – Powered by Fiction" was truly global in scope: the 274 total submissions include stories from 15 different countries and 36 U.S. states.

The competition is part of Tomorrow Project USA, an ongoing collaboration among the Center for Science and the Imagination, Intel and the Society for Science & the Public, that uses competitions and other tools to drive critical, creative, fact-based conversations about possible futures.

The winners were originally announced by Intel futurist Brian David Johnson on a live Google Hangout from the Intel International Science and Engineering Fair in Los Angeles on May 14.

“In an increasingly complex world, we need to arm students with new tools for synthesizing enormous amounts of information,” says Ed Finn, director of the Center for Science and the Imagination and assistant professor in ASU's School of Arts, Media and Engineering and the Department of English. “Storytelling is a powerful method for taking information from a variety of sources, imbuing it with human significance and making meaning from it. The Tomorrow Project [provides the] opportunity for students to use storytelling to explore the future as a spectrum of possibilities and consider the potential consequences of the rapid and accelerating changes we’re seeing in science and technology.”

Ten winners were selected to receive a $1,000 prize from the Intel Foundation and to have their work published in an anthology, "The Future – Powered by Fiction," to be released in summer 2014. The winners represent three different countries and eight U.S. states:

Tenorio is an ASU graduate student and a research analyst at ASU’s Office of University Initiatives.

In addition to the ten $1,000 prizewinners, 33 additional stories will be published in a series of three anthologies to be released throughout 2014 and 2015. To see the full list of winners, visit: http://isef.tomorrow-projects.com/results/.

The winners were selected by an editorial board of scholars, journalists, artists and futurists, chaired by Ed Finn and G. Pascal Zachary, professor of practice at ASU's Walter Cronkite School of Journalism and Mass Communication and the Consortium for Science, Policy and Outcomes.

Bryan Walsh, senior writer for TIME magazine and a member of the editorial board, said of the winning entries: “The stories I was fortunate enough to judge showed a wonderful imaginative sense, an ability to use fiction to explore the shape of our future.”

All of the anthologies published in 2014 and 2015 will be free to download and share from the Center for Science and the Imagination and Tomorrow Project USA.