It doesn’t take a sky-high budget to conduct aerospace research, thanks to weather balloons and a little ingenuity.

Teams of students from across Arizona, including a team from Arizona State University, launched their unmanned research balloons as part of the Arizona Space Grant Consortium’s ASCEND program, short for Aerospace Scholarships to Challenge and Educate New Discoverers. The launch took place March 27 in Pinal County West Park in Maricopa. 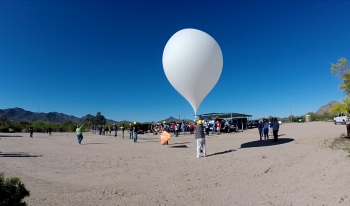 Every semester student teams design and build payloads for launch on high-altitude weather balloons. About 10 feet in diameter when inflated, these hardy balloons can reach altitudes of more than 100,000 feet – higher than a passenger plane – yet can be built on a shoe-string budget.

This semester, a team of 12 ASU students put together a research payload to collect panoramic video and thermal imaging data. Instead of rockets, boosters and expensive control systems, they filled a weather balloon with hydrogen and hung a carbon fiber box underneath to carry the cameras and sensing equipment.

The balloon and camera made it up high enough to see the black sky curling around our blue planet, a staggering 94,687 feet. The flight was approximately three hours. When the balloon burst, the payload took about 45 minutes to come back to Earth, landing about 5.7 miles from the launch site.

ASU/NASA Space Grant provides funding to the ASU ASCEND team for payload materials and travel expenses. The payload cost roughly $1,000. The Arizona Near Space Research provides the balloons for the launch. Launch costs typically run around $5,000, including the “extras,” such as GPS beacons.

“As the team leader, I was required to manage the logistics of a complex project, making sure all systems work together in the final product. Having done this before, I have the opportunity to pass on the lessons I’ve learned to others on the team,” said Jack Lightholder, a paid ASU/NASA Space Grant intern and veteran balloon launcher.

Part of the Arizona Space Grant Consortium Workforce Development program, ASCEND is designed to engage undergraduate students in the full “design-build-fly-operate-analyze” cycle of a space mission.

“This program gives students the experience of developing an experimental question, developing a payload design to test it, building said payload and analyzing the data. The dataset will also be used for some baseline testing of other instruments within SESE labs,” Lightholder said. This was his seventh launch.

Fifteen secondary school teachers from South Sudan, and one from Rwanda, are currently immersed in a customized four-month program developed by faculty at Mary Lou Fulton Teachers College at Arizona State University.

In the world’s youngest country – fractured for decades by ethnic civil wars – South Sudan educators are attempting to rebuild their classrooms and their country at the same time.

To that end, 15 secondary school teachers from South Sudan, and one from Rwanda, are currently immersed in a customized four-month program developed by faculty at Mary Lou Fulton Teachers College at Arizona State University. 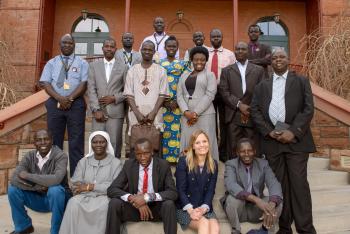 “Because of the conflict and the lack of infrastructure, the South Sudanese are significantly behind in terms of technology advancement and business development,” said Alissa Koerner, senior project manager of Teachers College’s Center for Advanced Studies in Global Education, unveiled in fall 2014. “In spite of the volatile situation, they are trying to restore their country’s educational system, and teachers are a very important part of that.”

Emphasis on equity in education

The first-ever cohort of South Sudan fellows includes Umia Wurube, who teaches at Juba Girls School in the country’s capital of Juba. He said the ongoing civil wars have left an entire generation of children without an education – most of them girls. Recent findings by BRAC (formerly Bangladesh Rural Advancement Committee) South Sudan show that only 6.2 percent of the girls in that country complete primary school.

Wurube said his nonprofit-funded school was sanctioned by the South Sudan government to help reduce female dropout rates, noting that his students feel “much more free” to study in a girls-only environment. It is part of a larger effort in his country to close the gender gap in both education and employment, he added.

“Of course, the bigger purpose is to eventually empower these women economically,” Wurube said. “By encouraging them to go to school, they will become financially independent. There are a number of traditions and beliefs that the woman should only rely on the man. The government is trying to address these gaps.”

Equity is a key emphasis of the new South Sudan Education Fellows Program, funded through a generous investment from businessman and philanthropist Ed Eisele. According to Koerner, the in-depth curriculum focuses on teacher leadership, effective instructional methods and technology in the classroom, derived in part from Teachers College’s highly acclaimed undergraduate teacher preparation program called iTeachAZ.

She noted that the fellows bring with them their own teaching experience ranging from two to 20 years.

“The 23-year-old of the group knows more about technology, while the fellow who has been teaching for 20 years knows more about classroom management and teaching to objectives,” Koerner said. “So they support each other in developing all of these skills.”

For their field experience, the fellows formed a partnership with ASU Preparatory Academy, touring its Phoenix and Mesa campuses with student guides and Josephine Marsh, ASU faculty in residence. The fellows had lots of questions for the young students and were particularly impressed with their confidence and willingness to share what they were learning, even the kindergartners, said Debby Kray, ASU university supervisor.

The 16 fellows also are being paired with 16 middle school students and several high school students for a multi-session writing workshop called The Writing Exchange. After interviewing the fellows and working with them to write a biographical profile of each one, the Middle School Ambassadors will introduce the South Sudan teachers to their classmates at a Prep Talk in April.

“The goal of the field experience is to connect the theory that the fellows are taught in their classes to the learning strategies currently in use in American schools,” Kray said. “We hope to give them new tools they will be able to adapt and apply to their schools back home.”

Observing how teachers and students use technology in ASU Preparatory Academy classrooms has inspired Wurube to work hard to introduce computers in South Sudan schools where the current lack of infrastructure often means limited or no electrical power. In Rwanda, however, access to technology is improving thanks to expanding fiber-optic networks and a government program that leases computers to teachers, said fellow Alice Muhimpundu.

“Twenty years back we had genocide, we had a bad history,” she said. “But now we are working hard to make our country better. We have the highest number of women in government in all of Africa. And now our students can receive nine years of education for free.”

Muhimpundu teaches at Agahozo-Shalom Youth Village, a residential community and high school founded in 2008 by South African-born philanthropist Anne Heyman who died last year. It takes in youth who have lost both parents either to genocide or HIV/AIDS. Approximately 500 Rwandans ages 14 to 21 live and study there.

At first, the traumatized children receive only intensive counseling, Muhimpundu said. Later, they are transitioned into the academic program where they study English, math and electives of their choosing. After passing national exams, many of her students have continued on to college – three of them currently on scholarship at ASU.

“When they come to us, they have psychological problems,” she said. “At first, we dry out their tears and start their counseling. Then, after that, we give them hope and show them they have a bright future. We show them they can do anything!”