The stage at Galvin Playhouse will turn into a runway this Friday with the fifth Sun Devils Wear Prada event.

But it’s more than just a fashion show; the club of the same name worked with an Arizona State University psychologist to show how beauty isn’t just skin deep. 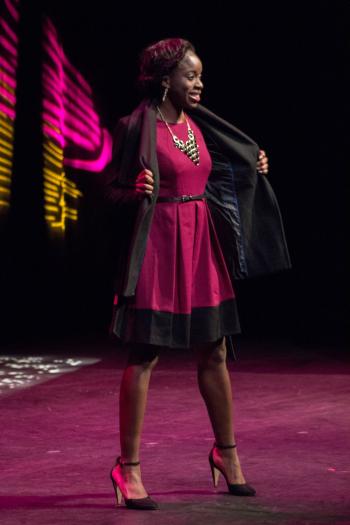 The club’s mission statement to inspire ASU women to reveal self-worth through personal style is shown at their club meetings and their fashion event.

This year’s show theme of “everyBODY beautiful” was partly inspired by their involvement with The Body Project at ASU, a program designed to teach women about body acceptance.

“The Body Project definitely changed the way we thought about the way we’re organizing the show,” said Brenna Goodwin, president of Sun Devils Wear Prada and a junior psychology student. “Our core values totally align, and that’s what we want our show to be all about this year.”

The Body Project, offered at 100 universities, also trains undergraduate women to become peer leaders in body acceptance. Body acceptance is often at the core of a range of issues that pertain to women, according to Marisol Perez, founder of the Body Project at ASU and associate psychology professor.

“We find that women won’t take risks or put their name up for leadership roles because there is fear of judgment of how they look,” Perez said.

Perez talks about the “thin ideal,” the ideal woman according to society’s standards, in her sessions. She has participants think about how much time and money they invest in makeup, beauty products, shoes and clothes to meet the standard.

“If you wear makeup, great, but don’t feel unattractive when you don’t wear makeup,” Perez said. “When you ask those questions, you realize how much of our lives are dictated because we don’t feel good enough. We’re not saying change, but we want it to be more of a choice.”

Community and resident assistants at ASU residence halls are required to go through the training. The Body Project is presented in a different residence hall every month on one of the four campuses. Eventually Perez said the goal is to have all first-year undergraduate women attend the program and expand to high school and middle school campuses.

Since its launch in fall 2014, almost 1,000 college-aged women participated in the program, which consists of two sessions that last two hours. Some Sun Devils Wear Prada officers and advisers contacted Perez about a partnership and went through the sessions.

“I loved the idea,” Perez said. “With Sun Devils Wear Prada, we want to support clubs and any activities geared toward women and [that] are a body positive event.”

“It’s important because every day we’re bombarded by messages of ‘This is beautiful. This is what we need out of you. This is what you’re expected to look like,’” Crow said. “It was cool being able to do that and see how big it was, and be able to see how to combat that.”

Goodwin said participating in The Body Project helped her see how natural it is for women to put themselves down. The club’s purpose for the event is for every woman to realize she is beautiful. In addition to a fashion show, style expert Shari Braendel, author of “Good Girls Don’t Have to Dress Bad,” will talk about style tips and tricks that will help highlight every woman’s natural beauty.

“That’s what we’re trying to do together – Sun Devils Wear Prada and The Body Project – is take the pressure off of girls,” Goodwin said. “The truth is you’re beautiful the way you are, and your value doesn’t come from what you look like or what people say about you or anything. You’re valuable because you’re you and you exist.”

ASU invites community to help redesign the future at Emerge 2015

ASU's Emerge 2015 will showcase its radically new visions of the future on March 6 at the SkySong Innovation Center in Scottsdale.

ASU invites community to help redesign the future at Emerge 2015

Radically new visions of the future will be showcased as part of Arizona State University's Emerge 2015 – a one-day event featuring visionary Jad Abumrad, host of the award-winning show Radiolab, and 10 spellbinding "visitations from the future," including theatrical performances, improvisation, games, dance and hands-on opportunities to design and build the future.

Part performance, part hands-on interactive experience, the annual Emerge event explores the ways we are already creating the future, and asks us to think about how we ensure it is the future we hope for – rather than one we dread. 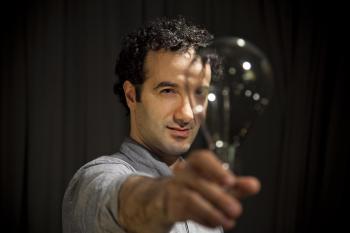 The theme of Emerge 2015 is The Future of Choices and Values.

“Humans today have unprecedented power to harness and reshape matter, energy and even life itself. Emerge asks what kinds of futures we should build together, at a moment in history when what we can do is almost unlimited,” said Joel Garreau, founding co-director of Emerge and professor of law, culture and values at ASU’s Sandra Day O’Connor College of Law.

Each of the 10 “visitations from the future,” as well as the performance by Abumrad, are different ways of responding to the open question about what kind of futures we can envision, and what kind of futures we want. Because the teams behind each of the visitations are drawn from such diverse backgrounds, their answers could not be more different.

“There’s a really wide range of experiences at Emerge this year," said Megan Halpern, director of collaboration and research for Emerge 2015. "I’m especially excited to see how seriously Emerge takes the idea of play, and how the teams are incorporating opportunities for the audience to express their ideas creatively.”

Abumrad, the headliner for this year’s event, is the creator and host of Radiolab, the popular public radio show about “curiosity,” broadcast on over 500 stations across the nation and downloaded more than 9 million times a month as a podcast. In his Peabody Award-winning program, Abumrad combines journalism, storytelling, dialogue and music to craft compositions of exploration and discovery.

At Emerge, his exciting performance, called “Gut Churn” – which includes video and live sound manipulation – begins with a simple question: What does it mean to “innovate?” How does it feel to make something new in the world?

On one level, this is a personal story of how Abumrad invented a new aesthetic. On another, it is a clinic in the art of storytelling. On a third and more profound level, the lecture is the result of a three-year investigation into the science, philosophy and art of uncertainty, which all began with the two words in his title – gut churn. What use do negative feelings have during the creative process? Do those feelings get in the way, or do they propel us forward?

The event is set to take place from 3 p.m. to midnight, March 6, at the university's SkySong Innovation Center in Scottsdale, and is free and open to the public, with registration requested through asuemerge2015.eventbrite.com.

In addition to Abumrad, a host of talented artists, thinkers and creators, will be in attendance including Jonathon Keats, conceptual artist, Forbes art critic and novelist; Don Marinelli, co-founder of the world-renowned Carnegie Mellon Entertainment Technology Center (ETC); Rachel Bowditch, theater director and associate professor at ASU’s School of Film, Dance and Theatre; Toby Fraley, Pittsburgh-based artist and creator of the exhibition The Secret Life of Robots; Megan Halpern, co-founder of Redshift Productions, an arts-science performance and outreach company and postdoctoral researcher at ASU’s Center for Nanotechnology in Society; and many others.

Emerge 2015’s ASU sponsors and partners include the Herberger Institute for Design and the Arts; the Julie Ann Wrigley Global Institute of Sustainability; the Consortium for Science, Policy and Outcomes; the Ira A. Fulton Schools of Engineering; the Center for Science and the Imagination; the SkySong Innovation Center; the Office of the President; the Office of Knowledge Enterprise Development; the School of Earth and Space Exploration; the Sandra Day O’Connor College of Law; LightWorks; and the ASU Art Museum. Additional sponsors and partners include KJZZ 91.5, Scottsdale Public Art, Whole Foods Market and the Arizona SciTech Festival.

The 10 visitations from the future featured at Emerge 2015 are:

A performative vision of a future in which humans connect their consciousness to global cloud computing networks, seeking connectedness and enlightenment. Originally funded by Google and presented by students from UCLA, the performance integrates Google Glass wearable devices with live theater.

What if we could teach robots to dance? How would it change the relationship between humans and machines? ASU roboticists and performance artists are taking on that challenge using the Baxter industrial robot.

Johnny Appledrone vs. the FAA, created by Donald Marinelli

A one-man show about government surveillance, swarms of DIY drones and an alternative Internet, inspired by a story of the same name from ASU’s science fiction anthology "Hieroglyph: Stories and Visions for a Better Future" (HarperCollins, 2014), written by Lee Konstantinou.

Sustainability researchers and community members explore how we can work together to build happier neighborhoods through sustainability interventions.

Create your own prototypes of artifacts from the future. From parking tickets to coffins, the Future Design Studio asks you to imagine what everyday objects will look like in the future, and then invites you to watch as improv performers from The Torch Theatre create the world in which your objects exist.

A coin-operated robotic art-dispensing machine that scans the Internet for inspiration and creates customized paintings on 4 by 6 inch blocks of wood.

"The Artwork Forge" is co-commissioned by Emerge in collaboration with Scottsdale Public Art. Before Emerge on March 6, the project will debut at the Canal Convergence 2015 event on The Scottsdale Waterfront from Thursday, February 26 through Sunday, March 1.

A roaming atmospheric performance exploring utopian experiments, dreams and the concept of the ideal city, created by Rachel Bowditch of ASU’s School of Film, Dance and Theatre.

Create your own fairy tale from the future in an epic Lego build led by experts in the art and science of Lego Serious Play.

You Have Been Inventoried, created by Eric Kingsbury

An interactive exploration of RFID and data visualization technology explores a future where the smallest elements of your behavior can be digitally tracked, stored and shared with people around you.

Build a pinhole camera with a 100-year exposure time to hide somewhere in the Phoenix area, invisibly monitoring changes in the urban landscape between now and 2115.