From the classroom to the big screen: ASU professor shares success

Bambi Haggins, associate professor in the Department of English at Arizona State University, has taken her work from the classroom to the big screen with an HBO documentary titled, "Why We Laugh: Funny Women."

Haggins worked directly with "Why We Laugh" series producer Quincy Newell to develop a treatment for the project, which features several well-known women in the comedic industry, including Kathy Griffin, Tig Notaro, Joan Rivers and Whoopi Goldberg. Her goal was to delve into the experience of being a woman in the male-dominated field of comedy, and how that is impacted by social, political and cultural change. The series premiered on Showtime on March 21 to rave reviews. 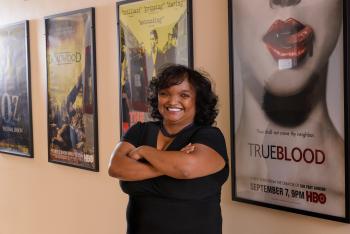 “It was a great feeling and, more importantly than the work I did, was that these female comics were finally getting their due,” she said.

Sept. 18, Project Humanities will provide a free screening of "Why We Laugh: Funny Women," with a discussion afterward, starring Haggins. The event will start at 6 p.m. on the Tempe campus.

The comedy aficionado also served as a historical consultant in Whoopi Goldberg’s documentary titled, “I Got Somethin’ to Tell You,” a story about the life of actress Moms Mabley. Haggins says the process reinforced her passion for filmmaking and desire to one day create her own masterpiece. She is currently working on an idea for a web series and for a feature-length film.

In the classroom, she instills the same themes she deems important in comedic documentaries. Her course, Comedy as Social Discourse, examines how comic conventions, sensibilities and personae in standup respond to social and political sensibilities at specific historical moments.

“My goal is to get students thinking critically about the media they are consuming. Standup is a great platform to get people talking and thinking about a variety of human experiences in a different way,” she said.

Arizona State University alumnus David Jacobson is an advocate of using humor as a therapeutic method to assist in the healing process.

We’ve all heard the popular saying that laughter is the best medicine. Now, researchers and medical practitioners alike are proving that it can be a powerful addition to recovery.

Arizona State University alumnus David Jacobson is an advocate of using humor as a therapeutic method to assist in the healing process. Through his research, he has found that laughter can affect perceptions, attitudes, judgments and emotions, which directly benefit one’s physical and psychological well-being. 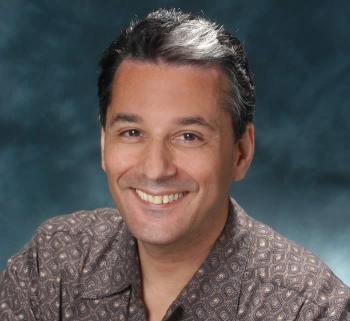 Jacobson, chief of Social Work at the VA Texas Valley Coastal Bend Health Care System*, first toyed with the idea of using humor to heal after he fell ill with rheumatic fever as a 22-year-old. The condition left him with severe arthritis. He had to relearn to walk and become independent.

“I was living with my mother and hobbling around trying to walk. I made it my goal to beat her to the phone the next time it rang. When it finally did, I made a joke in a voice like Igor and it cracked her up. This gave me the chance to get to the phone before her,” he said.

From that point on, Jacobson began researching the uses of humor in therapy and its effect on the body. When he later took up a position at the University of Arizona Medical Center, he was able to focus directly on this research. In fact, he proudly graduated from the Humor Academy offered by the Association for Applied and Therapeutic Humor.

“There are a lot of different ways to use humor to cope with chronic pain and stress. For example, someone who suffers from Post Traumatic Stress Disorder often exhibits signs of anger, tension and fear. Joining a support group that uses laughter and joking can possibly relieve these symptoms for some and ease the tension that’s built up,” he said.

According to Jacobson, a patient who uses humor along with other doctor prescribed forms of rehabilitation will experience cognitive changes in their brain. He says that a study by Allan L. Reiss, on magnetic resonance imaging (MRI) scans, have shown that neuro-receptors release additional levels of dopamine when a patient engages in hearty laughter. Studies on saliva and tears have also shown that laughter produces Immunoglobulin A, a chemical that boots the immune system.

“People who laugh don’t get sick as much. If you do get sick, you will at least be a happier sick person,” he jokes.

Jacobson will present this material during the Project Humanities fall semester kickoff at 3:30 p.m., Sept. 18, at the Mercado on the Downtown Phoenix campus. The “What doesn’t kill you makes you funnier” lecture will detail the appropriate and inappropriate uses of humor, therapy methods – such as laughter yoga – and an in-depth look at humor in the healthcare system.

“I want people to leave knowing that humor is important because you can learn to change negative thoughts to positive ones. Like in Star Wars, I want the humor force to be with them,” he said.

*Jacobson is an employee of the Department of Veterans Affairs. However the views expressed in this article do not necessarily represent the views of that Department or of the United States.