Jennifer K. Truong, a finance and marketing major, has been named the Turken Family Outstanding Graduating Senior for the ASU W. P. Carey School of Business for fall 2011.

She will receive a $1,500 scholarship sponsored by the Turken family and will have the opportunity to address the graduating class at the W. P. Carey School of Business undergraduate convocation, scheduled to take place Dec. 16. Truong will graduate with bachelor's degrees in finance and marketing, along with a minor in Chinese and a certificate in international business. 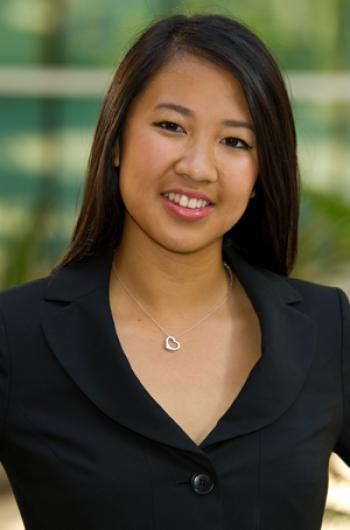 The first member of her family to graduate from a university, Truong says that if her parents had not been fortunate enough to find refugee camps to escape Cambodia, she would not have had the opportunity to follow their encouragement to “dream big.”  She credits her success to her parents’ inspiration. “Their experience illustrated how I could take control of my own future,” she says.

Throughout her time at ASU, Truong has been involved in many student organizations, including leadership positions as president of the Barrett Honors College Residence Hall Association and as co-chair of Camp Kesem, through which participants raised $46,000 to organize a student-run summer camp for children with parents who have died from cancer, or are currently diagnosed with cancer.

She also has served as a facilitator of a freshman success course that exposes students to resources within ASU and the W. P. Carey School of Business. Additionally, she participated in the INROADS Program, a national nonprofit career development organization whose mission is to develop and place talented minority youth in business and industry and prepare them for corporate and community leadership.

Truong secured valuable internships that have enabled her to develop her experience and knowledge of analytical and client management skills. She was an institutional business intern with MetLife for two summers, and this past summer she participated in the J.P. Morgan Asset Management summer analyst program. She also previously interned with a social media company, WedDone, LLC.

Truong also is a member of Barrett, the Honors College, and her first group thesis involves a detailed business plan for the InnovationSpace program and centers on integration of sustainability, biomimicry, nanotechnology, and design consulting. Her second thesis is a consulting project focusing on a strategic empirical study to support a local Arizona company, Lee Lee Oriental Supermarket.

Truong also earned two prestigious scholarships at ASU. In the W. P. Carey School of Business she was named a McCord Scholar in the prominent program in which scholars mentor incoming freshmen. At the university level she was selected as an ASU Spirit of Service Scholar for her mentorship work. She received other awards for her academic accomplishments and service to the community, including INROADS Dedication to Service Honor Award, MetLife Corporate Scholarship, GEICO National Achievement Scholarship, and W. P. Carey Marketing Excellence Award.

Upon graduation, Truong will engage in a fellowship with Kiva, a microfinance institution. Once that is completed, she will work as an analyst in the Asset Management Division of J.P. Morgan.

Continually adding to her long list of accomplishments, ASU's Mirna Hodzic is a self-proclaimed xenophile with a voracious appetite for knowledge.

Arizona State University undergraduate global health student Mirna Hodzic is a self-proclaimed xenophile with a voracious appetite for knowledge and a fervent will to help others.

Born in Sarajevo, Bosnia, Hodzic has made the most of her education since her move to Arizona at the age of seven as a war refugee. In addition to all of the stressful factors of attending school for the first time, Hodzic had to deal with the issue of a language barrier. However, this is one of the things that encouraged her to push the limits on academic work and helped lead to many achievements. 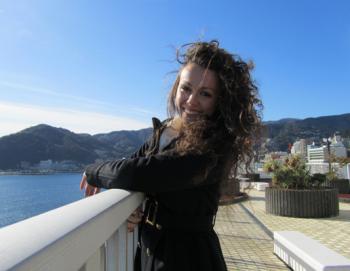 In high school, Hodzic was a part of the International Baccalaureate Program. Since then, she has held numerous administrative, volunteer and research positions and received a number of awards and scholarships.

After considering study in the fields of design (architecture or interior), psychology and anthropology, Hodzic was thrilled to find that ASU had added global health to its majors. She quickly declared it and tacked on two minors: sustainability and speech and hearing science.

Always interested in humanitarian work, Hodzic was drawn to the global health program’s interdisciplinary approach, which involves multiple methods to build solutions to some of the world’s critical health problems.

“It is this type of approach that seems to be the most effective, since so many of the troubles in the world cannot be resolved by considering a single factor...everything is interrelated and complex, and therein lies the challenge,” Hodzic said. “Most importantly, global health is a unique field in that it considers culture in implementing interventions.”

Being a xenophile, the appeal of global health for Hodzic is obvious. She loves traveling, experiencing new cultures and their foods and learning new languages. Currently, she is studying Korean and already knows Bosnian/Serbo-Croatian, English, Spanish, French and Chinese. She recently participated in a study abroad trip to China and has visited South Korea and Japan.

Hodzic has had a great experience so far in the School of Human Evolution and Social Change in the College of Liberal Arts and Sciences. She has found professors who are dedicated and invest time in their students, as well as numerous opportunities to conduct research with esteemed faculty members. She has served as an assistant, instrument developer, collaborator and evaluator on several research projects, mostly concerning global ethnohydrology (cultural knowledge of water issues). These experiences have fully prepared Hodzic to enter into a Ph.D. program once she obtains her bachelor’s degree.

Graduate school on the West Coast is likely for Hodzic. She is applying this fall to several schools with epidemiology, public health and global health doctoral programs. She plans to use this degree to become a professor, an epidemiologist or a nonprofit worker. “Wherever my future path leads me, I hope that I can play an active role in making a positive change in the world,” Hodzic said.