The award recognizes a distinguished scholar in the fields of physical and engineering sciences, with focus on fostering the development of graduate school offerings leading to doctorates in the fields of the physical sciences and engineering. The first holder of ASU’s Galvin Professorship was ASU Regents’ Professor John Cowley, a physicist and namesake of ASU’s J.M. Cowley Center for High Resolution Electron Microscopy. Fromme's professorship is a five-year appointment and took effect on July 1. 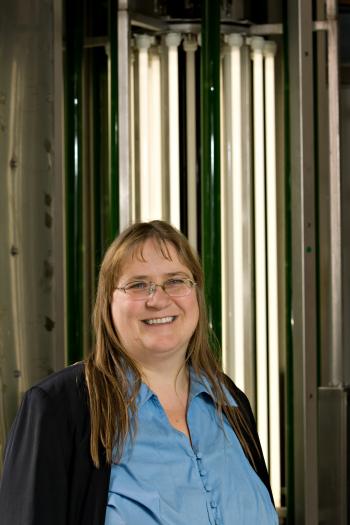 “The Galvin appointment honors some of our best in science and engineering,” said Elizabeth D. Capaldi, provost and executive vice president of ASU. “Professor Fromme directs an internationally recognized, collaborative research effort and has published high-impact seminal studies at the interface of biochemistry and biophysics. These efforts, like those of Paul Galvin, are not only shaping the way that research can be done, but the opportunities and skills of the next generation of scientific leaders and entrepreneurs.”

Fromme joined ASU’s Department of Chemistry and Biochemistry in the College of Liberal Arts and Sciences in 2002. An expert in the structural biochemistry and biophysics of membrane proteins, her highly interdisciplinary work has centered on developing understanding about these protein “work horses” of all cells.

Fromme’s early research on the two large pigment-protein complexes involved in photosynthesis, the bio-solar converters Photosystems I and II, was groundbreaking. It took her group 13 years to develop the high-quality crystals for the Photosystem I complex to ultimately allow them to determine its molecular structure. It was Fromme who also solved the structure for Photosystem II ahead of many in the upper echelons of the international crystallography community, including a Nobel Prize winner.

For decades, scientists have reconstructed the shape of biological molecules and proteins by illuminating crystallized samples with X-rays to study how they scatter the X-rays. Fromme’s studies, undertaken with Regents’ Professor John Spence and professor R. Bruce Doak with the Department of the Physics and other ASU colleagues, have helped reveal the atomic structure of biological nanocrystals and offered a new means for solving protein structures – using an X-ray free-electron laser and methods affectionately known in the field as “Diffract and Destroy.”

The femtosecond nanocrystallography technique opens a new area in structural biochemistry, which will allow the development of molecular movies of biomolecules at work. With the determination of the structures no longer limited to the growth of large crystals, diffraction snapshots can be collected from a stream of nanocrystals that contain less than 1,000 molecules using femtosecond X-ray pulses. While each pulse is so strong that it destroys any solid material, it is so short that the structure of the molecule is unraveled before the molecule is destroyed. Recently, the first experiments and steps towards making molecular movies of the photosynthetic process have been performed by Fromme and her colleagues. These studies could enable researchers to view molecular dynamics at a time-scale never observed before.

Fromme recently received a $7.7 million grant from the National Institutes of Health to reveal how membrane proteins impact the pathways that influence infectious diseases.

“Her research effort and multi-institution team are revolutionizing core understanding about infectious disease and creating exciting developments in medicine and clean energy,” said Robert Page, vice provost and dean of the College of Liberal Arts and Sciences.

Fromme also has fostered the development of undergraduate and graduate studies in the Department of Chemistry and Biochemistry, and programs in Plant Biology and Biological Design in ASU’s School of Life Sciences.

“Professor Fromme’s record of research and teaching accomplishments is truly impressive,” said William Petuskey, associate vice president with ASU’s Office of Knowledge Enterprise Development. “She consistently applies her expertise and enthusiasm to both research and instruction, which has made her a very popular teacher at ASU."

Fromme received her bachelor's and master's in biochemistry from the Free University and her doctorate in chemistry from the Technical University in Berlin, Germany.  She has published more than 114 peer-reviewed publications and received international honors that include a Lemberg Fellowship of the Australian Academy of Sciences, the Robin Hill Award from the International Photosynthesis Society, the Biologie 2001 Award from the Academy of Science of Göttingen, Germany, and ASU’s 2012 Faculty Achievement Award for Defining Edge Research: Natural Sciences and Mathematics. In addition to these accomplishments, Fromme is the director of the Center for Membrane Protein in Infectious Disease, one of only nine membrane protein centers funded by the Protein Structure Initiative from the National Institutes of Health, and member of the Center of Bio-Inspired Solar Fuel Production, an Energy Frontier Research Center sponsored by the U. S. Department of Energy.

Food justice scholar and author Matt Garcia wants to restore understanding of the important roles that the humanities play in today's society.

Arizona State University offers the intellectual community, teaching and cutting-edge research to create “the perfect fit,” says Matt Garcia, a food justice scholar who has just been appointed the director of the School of Historical, Philosophical and Religious Studies.

“If you studied the civil rights movement, wouldn’t you want to be at the heart of where it’s happening?” says Garcia. “It’s in Arizona where policies, such as SB 1070, the elimination of Latino Studies, and decision-making are being formulated, discussed and tested. It is the natural place for me to be.” 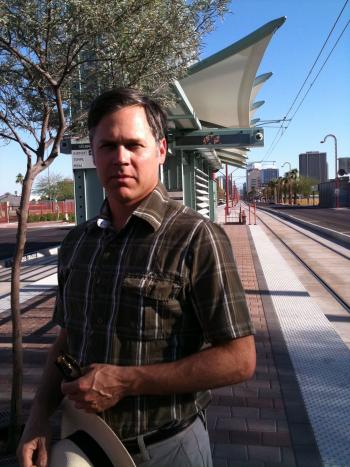 Recruited from Brown University, Matt Garcia joined the ASU College of Liberal Arts and Sciences in 2011, with a shared position in the School of Transborder Studies. Here he helped to build ASU’s Comparative Border Studies program, an initiative that examines the U.S.-Mexico border and other border regions around the world. However, his primary focus as director will center on restoring understanding of the important roles that the humanities play in today’s society.

“Humanities is all around us,” says Garcia, quickly referencing the influence of agriculture and food, the roles of women, marriage and religion on politics and society. “Philosophers and historians can shed light on these topics and more. Marriage, for example, has been an evolving conversation in society, never the set situation that it is often presently perceived to be.”

“Too often we as scholars forget how we can contribute to discussions about public issues of great importance,” he adds.

Garcia is particularly interested in how the culture of food and agricultural production in the United States provides pivotal insights for our future. He has penned book chapters and numerous journal articles, and, most recently, the book: “From the Jaws of Victory: The Triumph and Tragedy of Cesar Chavez and the Farm Worker Movement.”

Published by University of California Press in 2012, Garcia says that his book offers the most comprehensive history ever written on the accomplishments and shortcomings of the United Farm Workers (UFW), the most successful farm labor union in U.S. history. He originally started by looking at the parallel efforts of Filipino American and Mexican agricultural workers, whose united efforts around the grape boycott allowed the UFW to gain traction in the 1960s.

But during his exploration of the archive at the Walter Reuther Library at Wayne State University in Detroit, Garcia unearthed a treasure trove of taped recordings that the Arizona-born Chavez had made of all his meetings. The tapes included Chavez’s fights with the UFW executive board, purges of boycott volunteers and the UFW legal department. Ultimately, the archive revealed Chavez’s instability, and how it contributed to the dissolution of the executive board.

“I was hearing Chavez’ own words. It was gripping,” says Garcia. “Knowing this history informs our future choices.”

“Our agricultural workers are working in conditions similar to those 40 years ago. Awareness of how food is produced should create in the public a consciousness about social justice, as well as the importance of ‘eating locally’ or ‘eating healthy,’” adds Garcia.

Garcia hopes that the schools’ students will make connections between the ideas that they explore in their classes and the process of moving forward as a society: “Learning history is not simply about studying the past, but understanding how past events guide us to a better, more sustainable and socially aware future.”

“ASU is an incredible place to work and learn and do what I do best,” says Garcia. “I can’t think of another place to do it.”